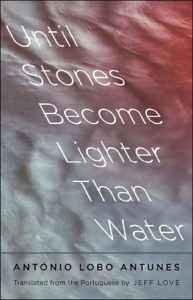 Tr. from the Portuguese by Jeff Love

In the fictional world of Portuguese author António Lobo Antunes, the Angolan War of Independence is a cantus firmus, a throbbing ground note that runs beneath all his works and to which he returns everlastingly, probing away with his scalpelic prose. The enormity of the conflict, which over thirteen years conscripted roughly 800,000 Portuguese men (out of a general population of only around two million), would seem to beggar a final accounting, which perhaps helps to explain Lobo Antunes’s obsession with excavating every aspect of the war. It’s an important mission, considering that in the long history of twentieth-century reckonings the Angolan war seems to have slipped under the radar. This is certainly true in America, where our own experience with the Vietnam War tends to overshadow other postcolonial conflicts, but it’s also the case in Portugal, where, for as long as Lobo Antunes has been writing, the war has topped the list of conversational tacenda.

It’s not insignificant, for instance, that Lobo Antunes’s rough contemporary and compatriot José Saramago, who won the Nobel Prize for Literature in 1998, tends to direct the greater share of his critical vitriol at religious authorities, with his most direct investigation of state-backed violence taking the form, in Blindness, of a sublimated, Camusian parable. There’s a certain distance in Saramago’s work, which luxuriates in philosophical discursus and baroque fabulism, that’s largely absent in the works of Lobo Antunes. Since his first works began to be published in the 1970s, Lobo Antunes has been a one-man wrecking crew, assuming the mantle of Portugal’s sovereign historical gadfly and positing, in work after voluminous work, the brutality of Portugal’s military intervention and its benighted failure to deal, in any meaningful way, with the terrible argosy of wounds that its returning soldiers carried home.

Lobo Antunes often gets compared to Joseph Conrad, for reasons both good and bad. One of his earliest novels, The Land at the End of the World, is a berserk indictment of the Angolan war. At the same time, though, it’s rife with a Conradian stereotyping of Africa as an immense, ageless continent, where the “water resembled murky sun lotion smeared onto old, grubby skin veined with rotting cables” and the natives watch the passing soldiers with “timeless absorption.” Published in 1979, The Land at the End of the World is a one-sided broadside aimed at Portuguese atrocities. Its pages are filled with a rolling, Manueline syntax that’s studded with brutally vivid imagery and a feverish blooming of metaphor, a stylistic choice that allows the novel’s shell-shocked narrator to vent his spleen in a continuous, rollicking combustion. But this elaborative technique, while adeptly deployed for surfacing the individual’s latent rage, isn’t particularly well-suited to the exploration of the Other — the sentences form a solipsistic loop that seems capable only of trapping subjective sense impressions and memories.

At the other end of Lobo Antunes’s career lies Until Stones Become Lighter Than Water, recently translated into English by Jeff Love. This new book demonstrates Lobo Antunes’ trajectory as a novelist, which could be described as a gradual broadening of scope, an attempt to incorporate more and more diverse voices into his fictions. It stands out as an admirable, if ponderous, attempt to create a fictional form capable of fostering the exchange of voices from both sides of a colonial conflict. This search for a middle ground results in a densely experimental style; the novel’s pages flash by in a ghostly cascade of speakers, all spouting off in rapid streams of consciousness. Imagine chopping up The Sound and the Fury into flash-card-sized snippets of prose and having a toddler rearrange them, and you’re close to approximating the reading experience of Until Stones Become Lighter Than Water.

The plot of the book is simple, sensational, ritualistic. A soldier in the Angolan war finds a young black child in the ruins of a village he and his company have just massacred, and brings the boy home with him to Portugal. The boy’s assimilation is fraught and frustrated — his sister loathes him, his parents seem faintly disgusted by him, and the neighbors and fussy old ladies of Lisbon level depressingly familiar accusations: he trails an ape-like smell; he is a little thief; he is dirty, filthy, unwashed, and unwashable. The soldier’s reasoning for bringing the child back is murky at first, though clearly possessive. As the text notes, “almost all the soldiers came back with mementos, a mask, a wooden doll, an ear in a bottle of alcohol, a boy, one arm less, silences in the middle of conversations where they wandered far away remaining over there.” Years later — and this is the event the text builds toward — the adopted son murders the father at a traditional pig killing, an act that’s abundantly swaddled with significance.

There are several subsidiary plotlines which, though they’re dealt with sincerely and function as compelling, realized narratives in their own right, often feel shakily connected to the main thread of the text. The father’s wife, and the boy’s adoptive mother, is afflicted with kidney stones; a doctor’s promise that a new treatment will make these stones lighter than water lends the book its title. It becomes clear as the novel progresses that there’s something more than mere kidney stones at work, however. An unspecified cancer eats away at the wife, thinning her frame and dimming her countenance. The intimacies of terminal illness are precisely limned and give the book much of its emotional punch, but when Lobo Antunes begins to draw a metaphoric connection between the kidney stones and the wounds of war, it’s difficult not to feel as though the linkage is forced. The traumas of war are figured as a similar sedimentation of razorous stones, which make certain motions — physical and emotional — painful, effortful, truncated.

And what traumas were there? The book is a damning, synoptic depiction of conflict, filled with indelible scenes and ghastly reminders of war’s dehumanizing calculus. Water buffalo are casually machine-gunned down, and defoliants are sprayed liberally about, withering and crisping the abundant vegetation of the region, which is later set ablaze by napalm (the use of which during the conflict Portugal officially denied). Naturally, a withering of the soul follows — Lobo Antunes’s soldiers exist in a cauterized state, adrift and benumbed; otherwise, they lash out violently, torture the native population, seek release in the murder of innocents. Angola, for Lobo Antunes, was a peculiarly Orwellian conflict, in which even the most minor acts of dissent were met with a swift tamping-down by the PIDE, Salazar’s secret police — dissenting soldiers were swiftly airlifted out of the conflict, their living souls routinely and humdrumly disappeared. Human expendability marked every aspect of the war — soldiers were forced to mine-sweep by hand, as the trucks they might have used were too valuable to risk.

Lobo Antunes’s new style is finely suited to limning the traumatic linkages forged between Angola and Portugal over the course of the war — the novel’s restless polyphony becomes a way of modelling the interpenetration of time and space that afflicts both father and son. Post-traumatic stress disorder appears as a form of exilic experience, one that, in the words of Edward Said, partakes of a “double perspective,” in which every “scene or situation in the new country necessarily draws on its counterpart in the old country.” The father, in the book’s characteristically fragmented grammar, reflects: “Africa remained with me in truck exhaust, in rustling leaves, in the impression that someone watching me where I couldn’t see him, hidden in some corner or in the half-light of a store . . . ” This ceaseless referentiality finds in each Angolan tragedy a foretelling of a paired tragedy that will later take place in Portugal; needless to say, the adamantine chains that link the past and the present in the novel can often feel uncomfortably prescriptive.

The son’s journey, similarly, is one of a resurfacing of memories, a gradual teasing out of the fleeting impressions that constitute his early life: “[P]erhaps here in the little garden,” he thinks, “with lettuce and cucumbers, perhaps in Africa in the manioc field since everything gets confused for me in my memory . . . ” With time, he cottons on to his father’s reasons for bringing him to Portugal — there’s little love in the arrangement, more a need to fill some essential emptiness experienced by the father, the desire to mimic an ossified domestic structure, as though this might ward off the phantom gusts of violence that still swirl in from across the sea. There is, too, a need to be perpetually impugned by the presence of his African son. The psychological reticulations Lobo Antunes deftly describes are one of the book’s strongest features, but it never feels as though enough attention has been given to the son — his words fill the pages, but his thoughts revolve in two ruts, those of alienation and rage. Despite Lobo Antunes’s painstaking ministrations, there’s a certain subtlety denied the boy.

Until Stones Become Lighter Than Water is at its weakest when it takes on the air of a parable, and when the novel’s climactic butchering is treated as a fait accompli. Granted, the air of ritual serves a clear purpose, reemphasizing the unregenerate violence that was the essence of the war, while bestowing the solemnity of a covenant on the ties of blood woven between Angola and Portugal. But a ritual is also necessary in some sense; within the world-view of those enacting it, it serves some definite, defined purpose, without which a negative outcome results. The necessity of a reckoning is easy to swallow, but the necessity of the war itself, which Lobo Antunes almost absentmindedly flirts with, is a tougher pill entirely. Nevertheless, Until Stones Become Lighter Than Water is a remarkable, intensely difficult book — remarkable largely because it’s so difficult. In the strangely egalitarian wash of his contrapuntal prose, Lobo Antunes concocts a fitting form for post-colonial reckonings — the promise of many voices is present in the text, even if Lobo Antunes at times loses himself in the flow.