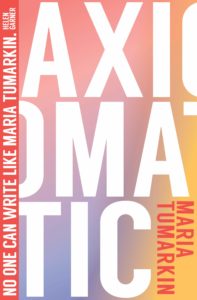 There’s a question asked a couple of times in Axiomatic, Maria Tumarkin’s powerful new work of narrative nonfiction: “What does it take to not be shocked?” In a book that proves Tumarkin to be a clear-eyed excavator of much pain and sorrow in our world, it’s a question that initially provokes some surprise. Shouldn’t we be shocked by what we’re reading? Tumarkin tells of suicide and its effects on a high school, of the enduring burden of having lived through the holocaust as a child, of generational legacies of abuse, poverty, and trauma — much of it is undoubtedly shocking. Tumarkin’s question, and the challenge built into it, serves as a through-line for the book, providing an interpretive lens for the book’s five remarkably varied sections that reveals Tumarkin’s insight into how we ought to respond to that which shocks us.

Both occurrences of this question follow Tumarkin telling of someone who responds to difficult, tragic situations with wisdom and poise; not being shocked enables them to help, providing needed aid. In the first instance, Tumarkin tells of a teacher, Amanda, who, when approached for help by a student who had been abused by a family member, responds, “‘Why talk to me?’ Amanda was not fishing. She wanted to understand. ‘Because,’ the girl said, ‘I thought you wouldn’t be shocked.’ What does it take to not be shocked?” The question arises a second time during the third section of the book, “History repeats itself,” a section primarily centered around Vanda, a defense attorney who comes off as one of the deeply heroic figures in Tumarkin’s book. Tumarkin is speaking of Helen Barnacle, the woman to whom Vanda sends clients with psychological issues:

[Helen] was once jailed for heroin possession while pregnant and fought for her daughter to be with her until the age of four. One was the normal maximum allowable age. Helen got a BA inside prison. ‘She is well known on the street, doesn’t have a middle-class past,’ Vanda says, ‘doesn’t go oh, poor you!’

This trait in Helen Barnacle leads to Tumarkin wondering, again — “What does it take to not be shocked?”

Tumarkin tells of the entrapment so many experience in their lives, the impossibility of their circumstances — how some children come “into a world that is like a tar pit,” as she puts it. “Time is not a river pushing people forward as they lunge at floating branches . . . but an oily, seeping substance. Black and sticky.” In another passage, she reflects on the nature of law and order systems, and how one’s perspective ought to be changed the deeper they are immersed in such systems:

I wondered if . . . the deeper in [the law and order system] you are, the antsier you get with lofty claims about justice and rehabilitation. Not because you’re disenchanted, more because maybe — Rai Gaita’s words — you have found a “sorrowful sense of our vulnerability to affliction” to be a better guiding principle than “let the punishment fit the crime.” Vulnerability to affliction, and also to chance, misfortune, genes, the family you are born into, postcode.

Tumarkin is attuned to the realities of unconquerable, systemic inequalities, as well as the crushing burdens that often come with one’s familial history, recognizing the real limits of human agency to affect personal change in such circumstances.

At the same time, even as she appropriately recognizes the difficulty of such lives and the myriad factors that can doom individuals starting from such perilous positions, Tumarkin refuses to write them off or treat them as lives lost and not worthy of living. “The idea of human dignity isn’t up to much if it does not encompass recognition that people who look like they have little or nothing may, in fact, have a great deal to lose,” she writes at one point. Tumarkin is dead-set on her readers coming away from her book with greater respect for those society might consider to be the least. She recounts, in one passage, how the deputy chief magistrate Popovic treats Ruby, a street sex worker who has had to detox sixteen times. Tumarkin watches as Popovic expresses her admiration and respect for Ruby, choosing to honor her rather than sink her deeper in her shame.

“I am amazed,” Popovic announces, “at your perseverance, Ruby. On average it is ten withdrawals before a person succumbs to lifelong dependency or dies. You’ve had sixteen detoxes, two rehab stints, I don’t think I’ve met anyone like you who just persevered. It demonstrates how hard it is. Despite your intelligence and commitment you’re still relapsing.”

For every Popovic there may be a thousand morally squeamish sermon-makers, and for every Ruby there must be a metropolis of addicts who’ll give up on giving up. But god what a mighty thing it is to see respect, a non-generic respect, given not because we all deserve respect as a matter of principle but because a young woman who turns up to court with sixteen detoxes in her bag deserves it specifically.

Tumarkin’s analysis in that passage encapsulates so much of what she does so well, honoring the specificity of each individual and situation, while also providing a text that speaks to the universality of those situations.

Part of what Tumarkin is trying to do in this book is simply to humanize; to say that this, in all its pain and sorrow, is the nature of our world. This may not be your life, but this is life as fellow humans experience it. The absence of shock she is after is one that comes with an absence of dismissal, an absence of other-ing — thus the significance of her positive portrayals of so many of her subjects entrenched in shock-worthy lives, stuck in their personal tar pits. Those portrayals serve to remind the reader of their humanity, reinforcing Tumarkin’s point that to look at such people, be shocked, and live in that shock is, more often than not, to dismiss.

Joel Pinckney is a writer living in Austin, Texas. His work has appeared or is forthcoming at The Millions, Ploughshares, and the Paris Review Daily.