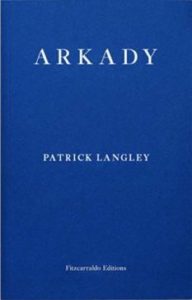 Patrick Langley’s Arkady is a coming-of-age novel for a world where it is no longer possible to grow up. The plot follows the childhood and early adulthood of two brothers, Jackson (steely, impassive) and Frank (restless, impulsive). They live in a London-like city in the grips of a slowly unfolding economic and ecological catastrophe. The combination of an atmosphere that shortens lifespans and the consolidation of resources in a few hands closes off the paths that people often think lead to maturity. The characters generally don’t buy property, pair off, embark on a “journey of personal growth,” or assume a series of jobs with escalating levels of responsibility. Without the aid of these circumscribed biographical pathways, they search for new ways to order their lives. In this way, it is a book for our times, when one generation’s anxieties about being shut out of the labor market are giving way to another’s fears about being able to inhabit the planet at all. It has the trappings of a post-apocalyptic novel. But a lot of Arkady’s dystopian elements — people pushed out onto the street by developers, species of insects dying off — are already here. If Langley is extrapolating a future, it can’t be a very distant one: it could be our world once global temperatures notch up, or after the recession that’s supposed to kick off sometime in the next year.

The first thing that happens in the novel is the disaggregation of the family unit. In a memorable, vivid opening scene, Frank and Jackson vacation by the sea with their parents as the earth warms. Everyone wears garish colors as they mill around a drab, arid resort. Then the police haul off Frank and Jackson’s father after their mother disappears, possibly drowned. (There are a lot of references to drowning in the novel.) From there, the brothers pass through various social formations. They attend the District Institute, a bureaucratic school; come under the care of Leonard, a sickly old man who acts as a pseudo-parent; and align themselves with the Red Citadel, a collective of squatters that follows an Occupy-like horizontalism. When the Citadel is forced out of the building it inhabits, the brothers drift around on a jury-rigged boat before settling in an abandoned rural town. The characters make use of what they can scavenge — Frank and Jackson eat on Leonard’s bed for want of a dinner table; a member of the Red Citadel builds a wall out of “junk and salvaged scrap” to keep the police at bay — and the links they forge come across as similarly thrown together. They experiment with a way of life until it gives out, then move on to the next one.

Langley’s description of this condition is compelling. The last decade or so of British history runs through Arkady almost subliminally in glancing references to “burning tower blocks” and workers exiting offices with “cardboard boxes filled with rulers, mugs, photos, files.” His style tends toward quick successions of visual details. A typical couple of sentences goes like this: “They emerge into the shadow of a half-built tower. Bundles of steel beams swing, glinting weightlessly mid-air. Glass panes flash in the rising light. Frank fixes his gaze to the pavement. Fissures branch like lightning through the slabs. A stupid thought occurs to him.” This approach is faithful to the characters’ fast-paced movement through scattered places and models for living. Once in a while Langley’s imagistic prose becomes too lush. He sometimes piles on elaborate similes: ripped plastic is “twisted and torn like surfboards washed up by a tidal wave,” pavements teem “like virulent petri dishes.” But more often the book successfully approximates what it feels like to live in a “media environment” characterized by rapidly administered shocks of fragmentary, discontinuous information.

The novel’s title, which is the name Frank gives to both the brothers’ boat and a character he obsessively draws who appears in dreams he has about drowning, seems to garble “ark” and “arcady.” The first part carries the associations of ships and flooding that word brings; the second speaks to the brothers’ desire for escape to some mythic idyll. For all its dying landscapes, Arkady can be downright Romantic in its insistence on the sublime power of nature. Sentences like “the land is squashed flat by the weight of the sky and the sea goes on forever” appear frequently. The novel is also full of longing for transcendence. At one point Jackson imagines “somewhere else. He was sick of here. This. These streets. These people. This sky. He wanted a world beyond it all.” This sentiment shows up throughout the novel in different forms. The brothers reject the officially sanctioned knowledge of the District Institute for their own ad hoc experiments in urban survivalism. They want to loose themselves from all terrestrial bonds. Frank sketches houses floating above the earth; Jackson, foreshadowing the brothers’ time at sea, reads from Foucault’s essay on heterotopias, which states that a boat is “a floating piece of space” and “a place without a place, that exists by itself.” Sometimes this urge is a front for a self-destructive one, like longings for transcendence sometimes are. Jackson initially imagines Arkady (the boat) as “a pale, forgotten thing, a shadow of a shadow. He liked the idea of oblivion.”

Whether Frank and Jackson’s withdrawal is a tenable approach to the crisis they face is uncertain; the novel is admirable in the measured ambivalence it brings to this question. The brothers seem to think that their bond will form the basis for a new world once they get out of this one. Frank remarks at one point that Jackson “thought the revolution began at home — that if you got things right between two people, that was a model for how a whole world might work.” Their conviction abstracts them from the people around them. Frank and Jackson exist at one side of the Red Citadel, living by it and associating with its members but not “involved,” a word that is stressed. The Citadel itself is portrayed uncharitably as a cacophony of fakers talking past each other as they outline incommensurable utopian projects. But Frank and Jackson’s retreat into a sealed-off dyad at times comes across as an abandonment of their duties toward others. In their last few hours at the Citadel, Jackson proclaims that he never cared about it before running away with Frank and leaving everyone else to face the police. And their freedom, when they finally realize it, is insubstantial. Once aboard Arkady, they end up eating leaves and drinking from a brown river.

So seafaring, fraternal micro-societies, and horizontal politics are all improvised fixes to a broader problem: the collapse of social institutions and natural ecosystems. Under these circumstances, the characters’ lives take shape as a series of disconnected stopgap measures, not as a gradual process of maturation. Arkady treats each of these with equanimity; at its best, it looks at them from a perspective that suspends the judgment of the present to salvage something for the future. The nonviability of all the readymade life trajectories into which you were supposed to imagine yourself means that old certainties have to be dropped. When there is a robust trade in advice on “adulting,” when every op-ed quotes the old line about how “the old is dying and the new cannot be born,” when the ranks of climate refugees grow steadily, new ways of structuring our lives will have to be tested. Arkady is up to this challenge.