Union-Busting on the Prairie

Redefining Labor and Academic Freedom at the University of Iowa 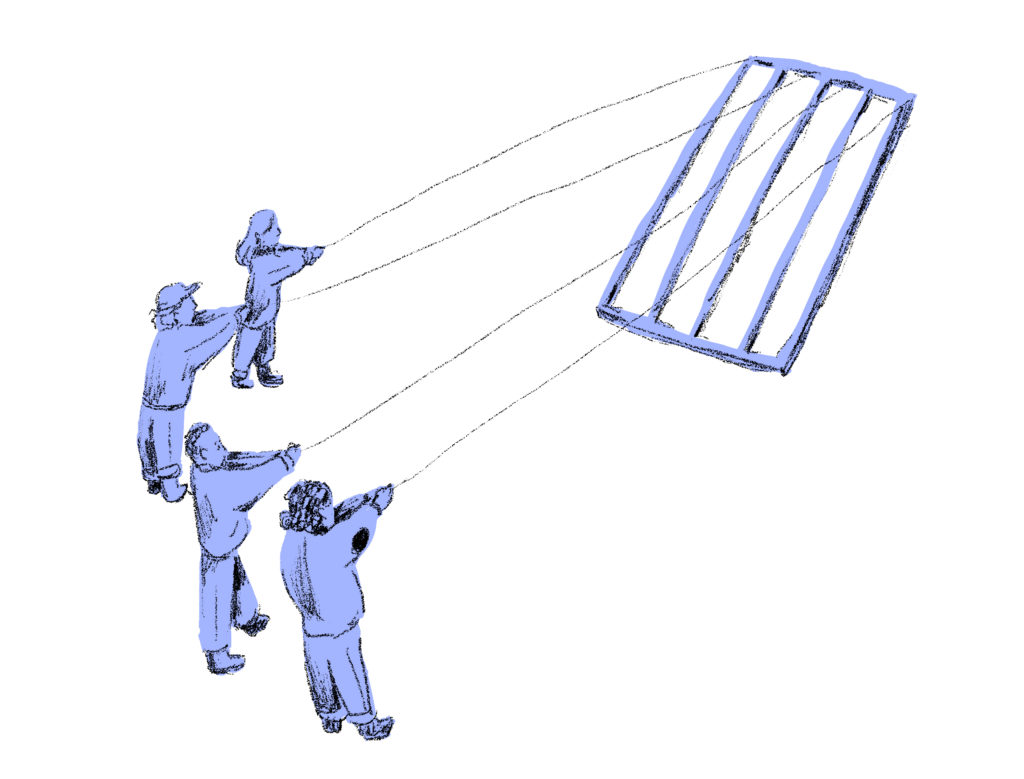 Illustration by Colleen Tighe. See more of her work here.

The recertification campaign was a year in the making. Countless organizing meetings, hundreds of pizza deliveries. Then came the rallies and the phone banking. Then the mass-mobilization: seeking out thousands of graduate students to convince them to abandon their libraries and labs for a moment and cast a vote for their union.

22 years ago, graduate students at the University of Iowa won the right to form a union. This fall, the Coalition to Organize Graduate Students, or COGS, was fighting to keep it alive.

By 2017 a steady erosion of labor laws under the state’s right-to-work regime gave way to a legislative amendment meant to gut public-sector unions. The legislation weakened collective bargaining on such a scale that the law was often characterized as “Wisconsin on steroids.” Part of this new law required the public university’s graduate students — along with teachers, nurses, sanitation workers, and prison guards — to recertify their union as the legitimate bargaining representative prior to every contract negotiation.

The vote was an enormous and sustained effort. And it had to be — with every uncast ballot stipulated to count against the union, the campaign was practically designed to fail.

But on a late October evening, COGS members piled into a converted church in downtown Iowa City to ring in a decisive victory — more than 80 percent of the University’s graduate students voted in favor of the union.

The celebration clocked in at an unceremonious ninety seconds before the delegation pushed on.

There was no time for a victory party. There was barely time for a collective sigh of relief. Bargaining was only weeks away, and rumors that the Iowa Board of Regents might try to rescind the full tuition coverage that past members fought so hard to win ran rampant through the room. Besides, COGS had to start planning for the next recertification vote, now less than 2 years away.

Their vigilance was warranted. In the first bargaining session since the 2017 anti-union legislation took effect, the Regents voluntarily cut a 60-page contract to a single page regarding wages. When COGS asked why they did this, the Regents simply answered, “Because we can.”

Elsewhere in Iowa City, allies of the University of Iowa Labor Center, a University-based organization aimed at educating workers and unions on labor-related issues, were struggling to keep the 67-year-old institution from closing.

The quiet, mid-summer announcement by University administrators that the labor center would be shut down caused an uproar among Iowans. Public forums and rallies were held across the state decrying the decision as the most aggressive sign of privatization in a once-prized public institution.

Yet UI President Bruce Herrald firmly held his ground, attributing the ruling to a matter of institutional budget. “Anything that doesn’t directly relate to the education of our students shouldn’t be funded through tuition and state monies,” Herrald said in a statement to the University’s daily paper.

The University’s official mission has three components: teaching, research, and public service. The fate of the Labor Center is an exemplary demotion of public service from the University’s priorities. Not only does the Center provide resources and educational programming to Iowan workers — from sexual harassment and racial discrimination training to wage payment rights to job safety — it houses an immense archive of Iowa’s labor movement, including the nationally-renowned Iowa Labor Oral History Project.

And despite claims that shutting down the Labor Center is a financially-driven decision, the numbers don’t add up. The Labor Center was recently awarded a 2-year $195,000 grant from the National Endowment of the Humanities to digitize their archival projects, and the majority of operation costs are already covered through registration fees for its educational programs. Projected savings for the closing the Center amount to $95,000 — less than .002% of the University’s annual expenditures.

Without concrete financial evidence to support the decision, the University’s dissolution of the Labor Center more closely resembles the Nazi regime’s burning of archives from the Institut für Sexualwissenschaft than a practical reevaluation of University funding allocations: the destruction of an archive deemed by those in power either too ideologically contradictory or too dangerous to take its place in the emerging histories of the past century.

But in the way that history accumulates by intimacies, their intersection paints the University of Iowa as a prairie-bound theater of the entwined ideological wars on labor rights and academic freedom.

Targeting labor education and organizing at an increasingly corporatized public university is a rare opportunity for the Right and their backers to exercise a more comprehensive form of union-busting. It tightens the anti-labor hold on power, not only by attacking active forms of organized labor, but also by withholding witness to its complicated and bloodied past. An institution of higher education is an arena in which history can be reconsidered, in which concepts can be redefined in ways that echo across society’s wider surface.

Iowa’s anti-labor attacks show that the structures of organized labor can be weakened until its very definition is remade, determining what actors and actions are constituted by the term. At the University, the weakening of COGS and the censorship of labor education and history are attempts to harness emergent definitions of labor in the Right’s image — a definition devoid of collectivism, contingent on employer benevolence, and unable to be withheld for better working conditions.

Let’s break down the intersection of labor rights and academic freedom, starting with COGS and graduate students, more generally. The state legislation that effectively abolished collective bargaining for public-sector unions did not specifically target academic workers, but they were enveloped in a larger attack. The legislation puts public-sector workers in a double-bind: the effort required to maintain the union is meant to be exhausting, which affects the quality of the actual work in their field of employment, reinforcing the rhetoric that public workers have cushy, ineffective jobs supported by taxpayers.

In the context of graduate education, strong unionization is mostly about securing adequate benefits, tuition remission, and creating a buffer against exploitation of teaching and research labor. To rescind these basic amenities (or to dole them out based on the whims of University administrators rather than collective action) makes more precarious the material conditions of academia.

The conditions of work have a profound effect on academic labor, which is to say the quality of writing and research and teaching. And the declining material conditions of the academic worker — from the job market’s heavy reliance on low-paying, unstable adjunct positions to the academic culture of pitting scholars against one another and discouraging collaboration — has a marked effect on the quality and depth of intellectual work.

On a broader scale, the absence of graduate student unions delays the introduction of the culture of organized labor into the life of an academic worker until well into their careers, if at all. Since they would not be socialized to consider themselves workers, it becomes less likely that they would introduce such ideas to their students.

Which is the point.

It is the point to dissolve notions of class-consciousness, or the dissemination of those ideas in the classroom, from emerging discourses of labor and its applications in the arena of higher education. Questions of academic freedom cannot be limited to critiques of the censorship of research and ideas — it needs to extend to the conditions that suppress the proliferation of such pursuits in the first place.

The weak reasoning used by the University’s president in his decision to close the Labor Center already enacts this ideology — he insists that students cannot be expected to pay for an amenity that does not apply to them. This framing projects a society where students — especially those that enter traditionally-unionized professions like nursing, education, and social work — never identify as workers, and therefore never consider the significance of collective action within their future workplace.

At an independent academic entity like the Labor Center, the coherence of labor rights and academic freedom appears differently. In a more straightforward sense, the Center is staffed by labor educators and historians and their work inherently involves both. The impetus behind closing the Center is directly correlated to withholding resources that inform Iowa’s workers of their rights and safety.

Less immediately apparent, the destruction of the Center’s archives erases the development of a deep, sustained understanding of Midwestern workplace cultures and legal frameworks over the course of three generations. It prevents scholars and labor organizers across trades from mining past struggles for strategies — or warnings — for the future. Archival erasure also makes room for the counterpart of forgetting: idealization.

The history of the Labor Center’s shifting affiliations within the University itself tells a history that is important to remember. While on its surface merely a benign reshuffling of University assets, the Center’s movements reflect larger shifts in the American conception of labor. At its creation, the Center resided in the College of Business as a part of a larger “Center for Labor and Management.” In 1980, the management function was removed, and the Labor Center was rehoused in the College of Continuing Education.

The removal of the Labor Center’s affiliation with the College of Business, as well as the splitting of functions of labor from functions of management, occurred, unsurprisingly, in the years following the rise of neoliberalism. Under a free-market ideology that favors unmitigated market growth over the conditions of working people, it was no longer an obligation of the management-class to have a working understanding of organized labor. Nor was it the duty of a business school to study the well-being of workers in the wake of the all-encompassing study of the profit margin, as the correlation between the two became increasingly obscure.

Measures taken by the state’s reactionary powers to remake the landscape of labor during the past few years might be the most aggressive, but not the first. Incremental shifts rightward in language and association — even in the banal costume of institutional bureaucracy — have been happening for decades.

But the overt aggression of recent attacks on labor have in some ways backfired on the Right’s agenda at the University. Jennifer Sherer, the director of the Labor Center, called the decision to disband the Center “the best publicity we’ve ever had.” People who have not interacted with the Center in decades are coming to the institution’s defense.

And a new generation of students are becoming aware of the fight for labor rights. Laura Szech, the president of COGS and a doctoral candidate in the College of Education, said that some of her undergraduate students were reminding her that there was apparently a very important vote for her union, did she know?

A contingent of students, most of whom did not know the Labor Center existed prior to the notification of its closing, is even spearheading campus activism to save it.

At a recent organizing meeting in Iowa City, one undergraduate student announced to the crowd, “Students are workers. If you think about it, there isn’t much distinction between students and workers.”

The Right’s quiet uncoupling of labor rights from higher education is experiencing a loud clap back from the generation of students they hoped to remake.

Perhaps Walter Benjamin said it best in his own concept of history — “To articulate what is past does not mean to recognize ‘how it really was.’ It means to take control of a memory, as it flashes in a moment of danger.”

Rebecca Zweig is a Visiting Assistant Professor at the University of Iowa and recent graduate of the Iowa Writers’ Workshop, where she was a Teaching Writing Fellow. Her work has appeared in the Nation, the Boston Review, and the New York Times, among other publications. She is a former member of COGS, and currently organizes SEIU’s Faculty Forward initiative.

With or Without U