The following is the introduction to the latest issue of the Full Stop Quarterly. You can purchase the issue here or subscribe at our Patreon page. 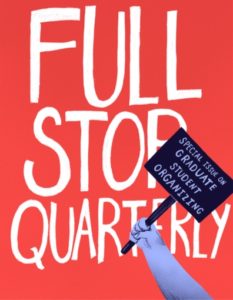 Full Stop is not a political magazine. Of course, art and literature—Full Stop’s central concerns since its inception—are certainly political, and we’ve always treated them as such. In the milieu into which Full Stop first emerged, there was a sense that a literature and culture magazine was basically a magazine about everything—meaning that it was also a political magazine. Personal essays were a popular genre at the dawn of the 2010s, and this form offered a particular mode for magazines to indirectly address political questions: A literature magazine could be a political magazine if its contributors wrote in a thoughtful and literary way about experiences they’d had, which might offer a perspective on society and culture that could contribute to thoughts on politics. Or, perhaps more effectively, if it published cultural criticism that functioned as ideological critique.

But over the years, Full Stop began to avoid publishing strictly personal essays. We ask that the writing we publish, while perhaps autobiographical, focus on particular cultural texts (books, films, art exhibitions, etc.). We don’t even particularly like to publish about television (although, of course, we do sometimes). It has been clarifying to establish this distinction: We are a magazine, essentially, for criticism. Criticism can think broadly about the world that we live in, but it is always grounded in some specific piece of culture outside of itself; it mediates mediation. And we are more specifically a magazine for criticism on marginalized texts, which lie outside of the mainstream and its networks of exposure and validation. We are not the best venue for ideological critique, as we don’t focus on mass culture. We are more interested in examining the fringes of contemporary culture for its emergent perspectives.

So the theme of this quarterly raises two important and unavoidable questions. For a publication that prides itself on working those unloved corners of literary culture—the small press debut novel, the work of speculative philosophy, the Romanian author appearing for the first time in translation—why turn our focus to graduate students? And moreover, why deviate from a principled commitment to untimeliness in nurturing new critical voices, and take up the very present-oriented and political topic of graduate student organizing in American colleges and universities in the past decade, with essays and interviews that (as many of those in this issue do) focus explicitly on organizing strategy?

Let’s begin with the question of the graduate student, whose connection to literature is often the tragicomic figure of the pathetic striver, scribbling away in their shoebox apartment hoping it somehow conjures up a transubstantiation into a full-blown, renowned, respected member of the intelligentsia. There is undeniably something of literary value to characters put through the churn of elevated status consciousness crashing against material limitations, but that is not our main concern in this quarterly. One of our material limitations as a volunteer-run literary outfit is our reliance on a community of readers who value what we do, and a community of writers excited to contribute to this project (or acting on a pressure to develop a public profile to supplement traditional academic publishing because of the harsh realities of the academic job market), and to do so despite our inability to fully compensate all of those contributions. We don’t have precise analytics to cite, but it is undeniable that a large portion of this community stands in some relationship to graduate study—not to mention that among the editors of Full Stop are several current graduate students, precarious academic laborers, and ex-academics (but no tenure-track professors).

One ambition for this quarterly is to shine a light on the material conditions that we negotiate on a daily basis along with other beloved members of the Full Stop family, of whom we are quite proud despite their (and our) career prospects. We can do no better than to cite Fred Moten and Stefano Harney, who write, “It cannot be denied that the university is a place of refuge, and it cannot be accepted that the university is a place of enlightenment. In the face of these conditions one can only sneak into the university and steal what one can. To abuse its hospitality, to spite its mission, to join its refugee colony, its gypsy encampment, to be in but not of—this is the path of the subversive intellectual in the modern university.”[1]

This brings us to the question of labor. As just noted, Full Stop is reliant on the labor of graduate students who exist in the pitched state that intense research and study produce. As beneficiaries as well as producers of this particular form of precarious labor, we feel compelled to create a space for assessing these conditions. In the United States, these conditions are, in some ways, particularly imperiled. Donald Trump’s worker-hostile appointees to the National Labor Relations Board (NLRB) have restricted the means by which workers across industries are able to effectively organize. This is no less true for graduate students, who face, in addition to the perennial arguments and strategies deployed by employers against workers attempting to build power, the frequent claim that, as students and as apprentices in the academic guild system, they are not workers at all and are therefore not entitled even to the minimal protections afforded to American workers as such. The “apprentice” model is less and less defensible given the state of the academic labor market and its increased reliance on contingent faculty. Kim Tolley points out in her interview on adjuncts, as does Emma Borzekowski in her essay on undergraduate unionization at public universities, that it is harder to deny the fact that the condition of laborer, ever precarious without union protections, is spreading across many categories in the academy.

Yet, in part because of graduate students’ contested status as laborers, graduate student organizing is a particularly powerful site for understanding and imagining the future of labor organizing in the United States. All of the essays and interviews in this quarterly come out of the experience of organizing to form unions on university campuses. They are reflections on strategy going forward, and also documents of the state of organizing in the university right now. Dennis Hogan and Hilary Donadio question the strategic value of organizing through the NLRB—the only federal body that exists to mediate between labor and bosses—given its whiplash vulnerability to shifts in political power. And Colleen Baublitz and Zachary Eldredge, members of the radical scientist activist group Science for the People, argue that unionization is the best way forward for addressing sexual harassment in STEM fields. Hailey Huget and Rebecca Zweig examine the current battles over the meaning of labor, as manifest in Georgetown’s insistence on policing the student/worker divide and in the struggles of a graduate student union and a local academic labor entity at the University of Iowa, respectively. Zachary Schwartz-Weinstein draws these discussions back to their broader historical context, providing firsthand accounts of two prior touchstones of the unionization push—Yale in the 1990s, and NYU in the early 2000s.

Categorizing workers in ways that deny them the right to unionize forms the core of current efforts against the expansion of unionized labor in the United States, as useful for Uber and Lyft as for Ivy League universities. Students, like Independent Contractors, are said to be excluded from those “on the shop room floor,” where unions, according to at least one university admin (but they all have the same talking points, as we’ve seen), belong. Conveniently for the anti-union argument, the shop floor is not the location of labor for most people in America today. This, we believe, has clear and sweeping consequences for education, and also for the literary and cultural fields, because it is the condition under which literature and culture are created, published, discussed, analyzed, and taught.