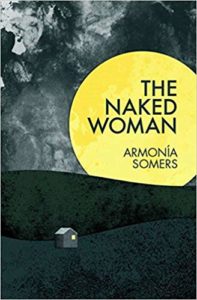 Tr. from the Spanish by Kit Maude

Uruguayan Armonía Somers occupies a very important place among the radically original and strange writers of Latin America. We can trace a kinship between her first novel, The Naked Woman (La mujer desnuda) and Comte de Lautréamont’s hallucinatory and dark writing, Clarice Lispector’s linguistic leap towards mysticism, and Marosa di Giorgio’s sexed, disturbing, and monstrous creatures. Armonía Etchepare published The Naked Woman in 1950, under the pen name of Armonía Somers, which from then on would be the name she would be known for; this eccentric novel amounted to a small earthquake in literary circles. Many attributed it to a man, or even to a group of male writers, but no one suspected that the author could be a woman.

In The Naked Woman, Rebeca Linke decides to cut her head off and to put it back in place the day she turns 30. This beheading can be read as a definitive break with reason; it inaugurates a rupture with everything that Rebeca Linke has been until that moment: from then on she wanders naked through the woods, without fixed name and identity, freed from social constraints and open to a new and ecstatic perception of her surroundings. The naked woman is faced with her own animal condition in a world which is pure danger and wonder: “Out in the field, the woman’s night, the first night she had ever truly owned, began: Feeling dizzy, she tried to grab hold of something to steady herself but there was nothing at hand. The stars shone down on her, clustered tightly as though their points had been soldered together. Even after her embarrassing fall, she was still dazzled. The night offered unlimited opportunities to fulfill her desires. She was much much freer than those sorry things in the sky — she was the night itself.” Rebeca Linke’s night signals a return to the potential of the female body and of female desire.

The novel asks what happens when a woman gets naked. Rebeca Linke’s effect on the people of a nearby town is cataclysmic: a couple of woodcutters, male and female, start having lubric dreams and fantasies; the idiotic twins — who find the naked woman — return home completely agitated; the priest gets lost in his own lustful thoughts. The whole town is contaminated with a heightened state of sexual and sensual awareness that they find both perverse and embarrassing. The peasant women can’t find a name for their sins, don’t know which words to use to name certain things that didn’t exist before. This complete derangement of the senses can only end by getting the naked woman lynched.

In The Monstrous-Feminine: Film, Feminism, Psychoanalysis, Barbara Creed has written that femininity is in itself monstrous, because women have been “constructed as ‘biological freaks’ whose bodies represent a fearful and threatening form of sexuality.” In fact, the construction of women as monstrous beings is inscribed in the foundation of Western civilization: Aristotle linked women to monstruosity when he used them as example of bodies that deviate from the male norm; for him, a woman was a man who was born defective. In Armonía Somers’ novel, the female naked body unleashes irrational and chaotic forces, capable of destabilizing the social fabric and signaling the path towards other forms of desire and social organization. The woman — that monstrous body — must be sacrificed for the town to go back to a fiction of normalcy.

The Naked Woman refers to the political dimension of the female body, whose freely-exercised sexuality — without the control of the Church or the family — threatens to reconfigure all social structures. That’s the reason why, at the end of the novel, it’s so important to punish the unruly woman. And that’s also why The Naked Woman continues to speak to us nowadays as fiercely and urgently as seventy years ago: more than ever, women’s bodies are the place of political battles that seek to change the way we understand desire, consent, and autonomy. The virulent resistance to women’s gains today is similar to the violence displayed toward the novel’s protagonist.

Of course, the relevance of The Naked Woman is also related to the way in which its language explodes and sparkles and it is continuously open to astonishing images. It’s impossible to read The Naked Woman as a traditional novel because meaning is often dislocated in its pages; we need to be willing to be swept by the hallucinatory flow of images as if it were a poem: “All she knew was what was in plain sight: a large field stretching out in front of her abruptly interrupted by the dark silhouette of a sea creature. Right from the start, she thought that the forest looked like a beached whale.” The Naked Woman works both as a visionary linguistic experience, and an allegory of the female body’s dark powers.

Liliana Colanzi is the author of the book of short stories Our Dead World (Dalkey Archive Press, 2017). She teaches Latin American literature at Cornell University.

An Apprenticeship or the Book of Pleasures – Clarice Lispector