Nobody Hates Trump More Than Trump: An Intervention – David Shields 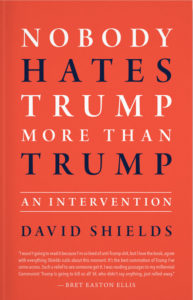 David Shields is the Tar Baby of criticism.

No, wait. David Shields is the Brer Fox who constructs a simulacrum of himself — “David Shields” — that, like the Tar Baby of the Uncle Remus folktales, leaves those that engage with it tangled up and worse for the effort. Shields’s recent books are collages of outrageous claims, quotes from other writers, and often embarrassing anecdotes about this “Shields.” The more Brer Rabbit readers engage with “Shields” and attempt to make coherent sense of his place in the texts, the more readers are stuck to and with his creator’s contradictions, banalities, and games. Shields uses “Shields” to exploit what he has called “reality hunger” — to use the title of his best-known work.  For Shields, the linear narratives of realistic fiction are so contrived that all reality is bled out of them. Only in memoirs and personal essays and fragments can any reality be found. Or, more precisely, any reality that interests Shields. His own personal hunger for his definition of reality is projected outward onto readers. Although they are constantly encouraged to believe “Shields” is the flesh-and-blood real David Shields, “Shields” is a fictional construct, a clothed lump of tar. And Shields is a Brer Fox who takes an ego-satisfying or maybe even sadistic pleasure in causing readers’ epistemological confusion in his book-length thickets of prose.  These thickets can be provocative and even entertaining performances when his subject is literature or other art forms. But when Shields employs his Tar Baby method to discuss politics, the limitations of his “Shields”-indulgence, as well as his insistence on collage, become obvious. You potential readers have a choice. You can decline to engage the Tar Baby this time, refuse the authorial manipulation, read no more of David Shields, even stop reading this review right here.

But wait. Consider that this time Shields’s fake “confessional” method in Nobody Hates Donald Trump More Than Donald Trump: An Intervention may be appropriate for his subject. Like “Shields” — who says he dislikes, if not hates, himself — “President Trump” is a real-world Tar Baby, the latest simulacrum in a series of simulacra that Donald Trump of Queens has created to hold in thrall those around him. Each one of these simulacra is the product of a narcissist (like “Shields,” he admits) who needs the attention of others to compensate for a wounded and empty ego. Whether the attention is positive or negative makes little difference to either Shields or Trump. Fake “Shields” is willing to garner attention as a literary buffoon; “President Trump” presents himself (falsely) as a victim, the Rodney Dangerfield of politics. The more Brer Rabbit citizens engage with this “Tar Trump” as a person and as a Tweeter, the more stuck and soiled they become, trapped in the thicket of his chaotic, contradictory, and stupid communications that distract from the reality of his administration’s actions and policies.

A question remains: is Trump a canny Brer Fox who exploits “Tar Trump,” or is there now no real Donald Trump, just a succession of “Trump” figures? Nobody Hates Donald Trump More Than Donald Trump purports to investigate that question. Shields repeatedly calls his book a “detective story” and seeks to identify the primal crime in Trump’s childhood that dictated his obsession with attention. Or maybe more accurately Shields projects his own early wounds onto Trump. As a boy, “Shields” suffered from stuttering, resented his disdainful mother, and was distant from a father who was in and out of psychiatric units. As a youth, Trump seems to have placed his mother on a traditional pedestal of passivity and curried favor from his tough-talking father. But Fred sent Donald away to military school, depriving him of the attention and affection he hungered for. This lack, like “Shields’s” inability to speak clearly, is the wound, according to Shields, that Donald has tried to cover over with his creation of simulacra: the sexual hero, the tough developer, the TV mogul. Shields’s Trump is probably not a Brer Fox but a walking vacancy that realized his obsession with attention could work for him.

For anyone familiar with Trump’s life, Shields’s fragmentary psychobiography is standard stuff, the basis for a “diagnosis” of what one psychologist has called “malevolent narcissism.” In interviews, Shields has said he watched months of cable television and read everything by and about Trump — biographies, journalistic accounts, transcripts of Howard Stern tapes. Passages from these materials are inserted into the collage of Nobody Hates, but Shields makes no rigorous psychological argument and his book tells us little new about “Trump” or Trump. Or even, really, about “Shields,” for many of the “confessions” of the “Tar Shields,” as well as some of his quotes from literary texts, are recycled from earlier books. At the book’s end, Shields produces the real criminal: the American culture that underwrote Trump. Shields’s last line, one of his favorites, is from Pogo: “We have met the enemy and he is us.”

The paucity of new information throughout is covered up by the rapidly shifting collage that seems — and only seems — to present clues that the reader of a “detective story” might find useful.  In Reality Hunger Shields mocked the very notion of “story,” of explanatory narrative that sequences causes and effects, so it’s not surprising that his “detective story” here is an illusion. Collage in poetry and fiction and even in postmodern criticism can be a valuable method, but it is a distraction and a dereliction when the republic is being threatened by an autocrat. Shields does have a relatively continuous take on Trump near the end of Nobody Hates when Shields assembles observations of the president’s behavior and some of his statements to support the claim of Shields’s counter-intuitive title. Because he hates himself, Trump is self-destructive. Not just that he takes crazy risks that result in bankruptcies or that he has sex without a condom with a porn star or that he governs irrationally, but that Trump secretly wants to fail in dramatic fashion and prove his assertion that even if he shot someone on Fifth Avenue he would not lose his followers. Just as American culture helped create Trump, America now has, according to Shields, a “death wish” that parallels Trump’s.

Shields’s apocalyptic theories, derived mostly from the ending of Nathanael West’s Day of the Locust, could be true. More likely the theories are a projection of Shields’s experimental literary risk-taking and the pleasure he takes in failing to meet conventional expectations of fiction or non-fiction. Shields likes the rhetorical “we,” the assertion that draws together Trump, Shields, me, and you, dear reader: “the more righteous our self-presentation, the more deeply we yearn to transgress, to fall, to fail — because being bad is more interesting, exciting, and erotic than being good.” The critic who calls a Shields book “bad,” who tars Shields with his own brush, is caught by the Tar Baby. “Bad” is good. Failure gets Shields more intense attention than success. But his self-cancelling, self-aggrandizing strategy does not seem to have worked this time. Nobody Hates has not been reviewed in any of the mainstream media that both Shields and Trump love to attack.

The least original element of Nobody Hates is the assemblage of quotations. They come from a very wide range of reading by Shields or by the dozen or so research assistants he credits at the end. Quotes that have no connection to Trump are offered to support whatever claim Shields happens to be making about Trump, but the texts are taken out of their context and frequently have only a minimal relation to the context Shields forces them into. At best, the people represented by or in the quotes are analogues of or surrogates for Trump. At worst, the quotes are banal space fillers. Most of the material about “Shields” belongs in this latter category. I suppose the jumble of other writers’ sentences and “Shields” anecdotes can be read as an imitative form of Trump’s discourse that depends heavily on what others have said (the retweets, the “some are saying” sentences), what he has said in the past, and what he can’t think of to say in the present. Trump doesn’t stutter like Shields, but Trump sure does stammer and repeat himself in his elementary-school diction. Even if Shields’s bricoleur “method” is formally appropriate, a little of it goes a long way just as listening to five minutes of Trump at a rally gives the auditor a good sense of a mind untouched by the protocols of literacy.

When Shields was pressed by an interviewer about not taking seriously the real consequences of Trump’s administration, Shields said: “The book is the book and my life is my life. In my actual life, I work to bring an end to the oligarchy.” Now we have the “actual” Shields, the writer Shields, and persona “Shields.” He wants to have it both ways . . . no, three ways: active citizen, provocative writer, confessional dork. As Huck Finn says when faced with fraudulence: “That’s too many for me.” Throughout the book, Shields mocks those who offer earnest analyses or moral judgments of Trump and his actions. I’m hungry for the actual Shields. Let’s see some photos of the famous author marching through Seattle with a protest sign. If actual Shields were really serious about ending the oligarchy, he’d have written a different book.

No fan of Shields or “Shields,” I was willing to get my hands sticky reading Nobody Hates Trump More Than Trump: An Intervention because I’m interested in literary treatments of Trump. I’ve reviewed four novels that deal with him — Salman Rushdie’s The Golden House, Gary Shteyngart’s Lake Success, Jonathan Lethem’s The Feral Detective, Sam Lipsyte’s Hark –— and I’ve published a book entitled Harpooning Donald Trump. For all of its limitations, Shields’s book — which I consider a postmodern fiction — is the most explicit of the fictions about Trump and is, therefore, the most pleasurably insulting to him. But I was disappointed that Shields was not more provocative. Because Nobody Hates is a fiction, he could get away with any speculation about Trump and his “wound.” The theory he offers is conventional and modest. My own immodest fictional speculation in Harpooning uses Robert Coover’s Uncle Sam the sodomizer in The Public Burning and opines that Trump was sexually assaulted in military school — and has been trying, through all of his simulacra, intimate relations, and public displays, to prove that he’s not, in prison parlance, a “punk.” Anal rape in prison is the fate with which Trump threatened the “rat” Michael Cohen, but this punishment is unfortunately not applicable to a president who can’t be indicted and jailed. So Trump gets to figuratively sodomize the American government and its citizens until he is impeached or defeated.

I can imagine Nobody Hates Donald Trump More Than Donald Trump appealing to readers who haven’t played hide and seek with “Shields” before and to readers who know little about Trump’s background. Shields’s subtitle is An Intervention. In what? The book is too literary to disrupt Trump’s presidency, and this fiction surely does not interrupt Shields’s addiction to the Tar Baby “Shields.” Even the flimsiest and flim-flamiest books by Shields, such as I Think You’re Totally Wrong, have been published by mainstream commercial publishers. This new one is released by a no-name press, which may indicate that I’m not the only person weary of Shields and “Shields.”

This Brer Rabbit intended to avoid getting stuck to Shields’s needy narration, but, now 1900 words later, I did. Caveat lector.

William Gass, Prophet of the Midwest