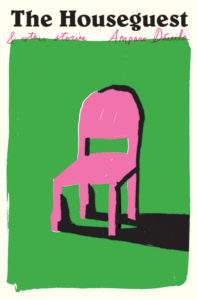 Tr. from the Spanish by Matthew Gleeson and Audrey Harris

In 1959, Julio Cortázar sent a letter from Paris to Amparo Dávila at her publisher’s office in Mexico. He did not have another address for the author whose first story collection, Tiempo destrozado, he had just received thanks to the efforts of a mutual friend, but he did want to express how much he admired the mastery and technique found on every page. “If I know anything,” he writes, “it’s what it takes to fully realize a story; in fact, in each book I publish, I am not satisfied with more than one or two of them.” He nevertheless identifies four pieces in Dávila’s volume that strike him as examples of those few works that “are born fully alive, with that right to endure in memory that is their terrible force and their most exact beauty.”

It is high praise, but after addressing Dávila as a peer Cortázar shifts into the role of slightly condescending critic. He suggests that, in addition to its singular achievements, Tiempo destrozado also contains stories that “hesitate and rely more on the theme (always opportune, unusual, ‘uncanny’, original) than on the expression.” Yet even as he objects to a predominance of substance over style, Cortázar himself turns away from felicitous phrasing to convey his impression: here uncanny actually appears in English, for it is a word not entirely at home in Spanish, where no great translation exists. Of course, perhaps the most famous formulation of this idea can be found in a German word that in turn has no natural equivalent in English: Freud’s unheimlich, which is, roughly, “unhomely.” And as Dávila reminds us in so many of her works, it is a sensation experienced by a guest or provoked by one.

The Houseguest and Other Stories, a slender new volume from New Directions, finally makes the Mexican author’s work available to English readers in Matthew Gleeson and Audrey Harris’ nimble translation. Born in 1928, Dávila, who wrote three books of poetry before also turning to prose, has not always occupied a prominent place in Latin American letters, but recently her work has found wider recognition, thanks in part to a younger generation of writers that includes Cristina Rivera Garza. In 2009, Dávila’s stories from three collections published in the late ‘50s, early ‘60s, and late ‘70s were released in a single volume that also contained five new pieces. The Houseguest and Other Stories is assembled from that 2009 work, gathering together twelve career-spanning stories that, as a whole, resemble a unique group of guests: relatives at a family reunion who have grown unaccustomed to living together but now exhibit an occasionally uncomfortable kinship as they do so again.

Dávila’s output, while not prolific, is certainly profound. Unequivocally adept at ambiguity, she brings a poetic sensibility to each sentence by locating the minimum amount of detail that will produce a maximal effect. But if there is a poetic touch, it is accompanied by the sure hand of an expert narrator. Dávila, after all, is a master of the first line. “He was buying the evening paper when he saw himself walk by with a blonde woman,” begins “End of a Struggle,” a story of a relationship remembered and misremembered that is also a stirring survey of possible selves, humiliations, resentments, and their consequences. “Haute Cuisine,” which concerns a typical delicacy whose production the narrator finds difficult to swallow, starts with a moment of reflection and sinister transposition: “When I hear the rain beating against the windows, their screams come back to me once more — those screams that would stick to my skin as if they were leeches.” The sheer sonic force of this image infuses the story with a vitality that it amplifies to an almost unbearable intensity in just nine paragraphs.

Although in many of the stories we catch a glimpse of eyes — bulging, brooding, probing, or otherwise — it is often a distinctively aural unease that dominates. Acoustics, in other words, overpowers optics as Dávila directs our attention not simply to sound but also to where it comes from and where it is heard. Exemplary in this regard is “Oscar,” which depicts a set of suffering siblings, one of whom is so sensitive to stimuli that he ends up making life unbearably difficult for the others. After a series of scenes describing the increasing toll such an affliction takes on those around him, the echoing laughter at the story’s end has a chilling effect.

In addition to these sounds the stories also render audible the silent struggles of a range of characters — although they are, more often than not, women. Dávila recognizes that what they put up with so regularly does not have to be named directly for it to be understood immediately, for its terror to be felt acutely. Perhaps the most remarkable piece in this respect is “The Last Summer,” the story of an unexpected visitor in the life of a forty-five-year-old mother of six with an unconcerned husband: another child. That guest ends up never arriving, but what does is a sense of guilt that overwhelms this woman who seldom finds any form of support but must instead provide it to others.

This lack of support was something that Dávila knew well from her own experience. “When I told my father that I wanted to come to Mexico City because I wanted to dedicate myself to writing, he told me: ‘That’s stupid, because to write you need talent.’” She rightly told him it was impossible to know because she had yet to begin writing. He then brought up originality, and she voiced the same compelling objection: there was still no way to tell if she had this quality either. Her most powerful response, however, came a few years later when she dedicated her first story collection to him.

The English collection’s title story comes from that first volume, and it contains some of Dávila’s signature strategies, including a blurring of animal and human worlds. In a small town that is “almost dead, or about to disappear” a woman is forced to take care of an unexpected guest her husband brought home from a trip. With “large yellowish eyes, unblinking and almost circular, that seemed to pierce through things and people,” this creature becomes a disturbing presence, one that does nothing to repair the couple’s relationship in which “affection and words had long since been exhausted.” Realizing that keeping an eye on — and out for — this guest is untenable and unbearable, the woman and her housekeeper agree that something must be done:

“This situation can’t go on,” I said to Guadalupe one day.

“We have to do something, and soon,” she replied.

“But what can we do the two of us alone?”

“Alone, true, but with such hatred…”

Her eyes held a strange gleam. I felt afraid and overjoyed.

As they form an alliance against a manifestation of misogyny, the two women set aside class differences. Taking matters into their own hands, they decide accommodations — understood in both senses — will no longer be made.

In Spanish, the word for guest — huésped, and the title of this story is “El huésped” — can also refer to a host or an innkeeper. (This latter meaning reaches back to the word’s Latin root, hospes, which exhibits the same multivalence.) Although one sense clearly dominates in Dávila’s story, this ambiguity at its heart reminds us of the ties between the two positions, of the ways different guests can turn the same person into different hosts, of how each one can make the other either feel at home or experience that sense of something unhomely.

In a later letter about Música concreta, Dávila’s second collection, Cortázar explained that “I wanted to read the book all at once, without those ‘cuts’ that chill the reading climate, and I waited for a weekend when I was sure they wouldn’t interrupt me.” He hoped, in other words, to read it without any guests around — without any distractions — and he remarked that he was happy to have done so since it allowed him to appreciate what he repeatedly and approvingly calls the force of the stories. As in the first letter, he went on to offer some criticisms, but this time he offered a different rationale: “precisely because I sense that you’re so close to perfection, to that point in which the story as aesthetic act adapts to the structure that includes it, and the latter to the former, I think that you can still go a little further and eliminate those ‘excesses’ that I note here and there.” Cortázar seems unwilling to recognize that what one person finds excessive another will consider just the right touch — the detail that makes something just familiar enough — and we might say that he was not the most well-mannered guest in Dávila’s work. Fortunately, we now have the chance to visit it and decide for ourselves.