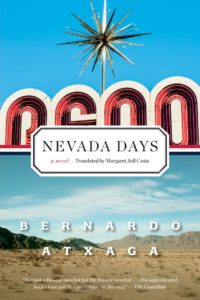 Tr. from the Basque by Margaret Jull Costa

Nevada Days is a quiet and profoundly singular portrait of Northern Nevada. The book, translated by Margaret Jull Costa, is Basque writer Bernardo Atxaga’s eighteenth novel and his fourth book in English translation with Graywolf Press. Much of the source material comes from Atxaga’s 2007-2008 academic year as writer-in-residence at the Center for Basque Studies at the University of Nevada, Reno. The book begins with the family’s arrival in Reno in the chapter “Silence”:

Reno is always silent, even during the day. The casinos are airtight edifices, carpeted inside, and no noise spreads beyond the rooms where the slot machines and the gaming tables stand in serried ranks. You can’t even hear the traffic on the busiest road, Virginia Street, or on the freeways that cross the city, the I-80 and Route 395, as if they, too, were carpeted or as if the cars and trucks were moving very stealthily.

When night falls, the silence, or what you subjectively experience as silence, grows even deeper. The mere tinkle of a bell would put the city police on guard. If a firecracker were to go off in a house, they would race there in their patrol car, lights flashing.

This observation reflects a city tucked within a desolate landscape — there’s no cricketsong in Reno at night and not much birdsong during the day — but this opening is also a foreshadowing of the tone and pacing of the book. In one of several letters to his friend L., Atxaga reports, “Looking at those mountains—far, far, far away, so far that the most distant ones looked like mere maquettes — I was keenly aware of the world’s utter indifference to us. This wasn’t just an idea either, but something more physical, more emotional, which troubled me and made me feel like crying.” Driving through Nevada, you could go a long time without seeing new scenery, and certainly without encountering breathtaking views — unless the sheer expanse would take your breath away — so it’s fitting that the book’s sublimity lies in its setting rather than its plot arc.

A Kirkus reviewer failed to take the book on its own merits when that critic surmised that “Atxaga has taken in a lot about the peculiarities of desert living, but he’s only half-heartedly attempted to deliver a full-bodied work of fiction about it.” Nevada Days doesn’t match up to plot-driven works of fiction — despite its sub-plot of sexual assault and murder — because that’s not the kind of fiction Atxaga has written. It’s a subdued book about place, rendering Nevada as its central subject.

Nevada Days reminds me of Sara Orne Jewett’s The Country of the Pointed Firs, a nineteenth century novel depicting the fictional Dunnet Landing, Maine, wherein nothing extraordinary happens. There’s no central conflict, no main character. Instead, the narrator, who is a writer and outsider just like Atxaga’s narrator, spends the summer learning about and documenting the history and legends of that small coastal community. The Country of the Pointed Firs delivers a series of character sketches and documentation of stand-alone interactions with the townspeople. Nevada Days likewise wanders as a visitor would, one who’d been welcomed in by the region’s inhabitants. Atxaga gives us snippets, history, and mythology of the Basque community as well as embellished reportage of his sojourn in the Western U.S.

Though subtitled “a novel,” Nevada Days reads like memoir.  The book begins with a series of short vignettes — sometimes no more than a paragraph long — as the family settles into a house not far from the University of Nevada Reno campus. Atxaga, his wife and their two children meet the constellation of characters that revolve around the Center for Basque Studies. There’s Bob Earle, a retired professor who donated the writer-in-residence house to the university and takes Bernardo on a series of trips into the desert, Mary Lore, who hosts dinner parties that introduce the Atxagas to the wider community, and Dennis the IT guy, who keeps a black widow in a jar in his office as a kind of experiment. Once settled, Atxaga and his family begin to explore the surrounding areas: the Pyramid Lake Paiute Tribe’s Reservation, the Black Rock Desert where Burning Man is staged, historic Virginia City, Lake Tahoe, and the ghost town Berlin.

As the family’s explorations cover more ground, the chapters also expand and build to more substantial stories, such as the twenty-page series of chapters on the early 1900s Basque boxer Paulino Uzcudun. The writer’s imagination expands alongside the chapters; memory and daydream blend. Twenty pages in, “A Drive in the Desert” is the first major departure from the short chapter and it departs in two ways: first, Atxaga ventures into the desert with his neighbor: finding a stolen FedEx truck with a rattlesnake in the driver’s seat, walking around the ghost town of Berlin, seeing a prison work crew on the side of the road. Second, Bernardo’s fantasies begin to appear. He recounts that when Bob Earle was moving the rattlesnake, it dropped onto the hood of the FedEx truck and started toward him, then he reverses course, saying he made that detail up: Earle successfully relocated the snake to the bushes. As another example of Atxaga’s imagination, between the first and second encounter with the prison gang, Bernardo relays a conversation between two inmates he imagines will jump them on their way back.

Originally published in the Basque language, then translated into Spanish by the author and his wife, Asun Garikano, (who is called Ángela in the book — Bernardo Atxaga is also a pseudonym,) Nevada Days was then translated from Spanish to English by Margaret Jull Costa. The English rendition, then, comes to us third-hand. Jull Costa is a British translator of Spanish and Portuguese. Atxaga’s voice, filtered through Jull Costa, reflects a British vocabulary, like when Atxaga dreams of being trapped in a hospital bed: “I was lying in a narrow bed, surrounded by metal bars, trying to attract the attention of the night carer my family had hired to watch over me,” or when he describes a shopping scene: “We put our shopping in the boot of the car,” or when he relays a domestic scene: “we found an answerphone message.”

Luckily, British and U.S. conventions of measuring distance overlap: distances are such a big concept for Nevada literature. When they first arrive at their house for the year, Atxaga notes “Inside, the habitable space was, at most, 130 square feet. The house was a mansion, but in miniature.” The conventions of measuring distance familiar to a U.S. audience mixed with less familiar British vocabulary serve to remind the U.S. reader of the intersection of cultures layered in this text and highlight the disorientation that comes from the early weeks of an immersion experience. There are moments in the book where Atxaga describes the limitations of his English speaking and listening skills. When ordering a beer, he says, “The bartender — who had a helicopter tattooed on his arm — made a joke when I ordered a Budweiser. I didn’t quite understand and merely smiled.”

If readers are looking for a clear plot and a dramatic arc, they’re likely to be disappointed. This is a book for readers looking for skillful writing with character and place very much at its center. Here, background is foreground, which means that the Nevada landscape and quotidian interactions are recurring themes — not because Atxaga fails to create a “full-bodied work of fiction,” but because this book is a travelogue which seeks to depict a region and its people.