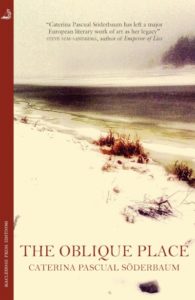 Tr. from the Swedish by Frank Perry

In Caterina Pascual Söderbaum’s literary memoir The Oblique Place the narrator tries, like many of us, to make sense of her place within her family’s history. But as she learns, hers is a history that is linked to some of the most notorious and devastating regimes in modern times. Her paternal grandfather fought for Franco, had a reverence for Hitler, whilst her mother was related to the famous Third Reich film star, Kristina Söderbaum. In our present age, it’s never been easier to search one’s ancestral history, but The Oblique Place shows the difference between searching a familial heritage and confronting the trauma it might contain. Don’t be fooled that this is a story about discovery. It is instead about trying to accommodate what’s been discovered.

Whether or not you think this all sounds like we’re in psychotherapeutic terrain is up to you. But as Söderbaum takes the reader backwards in order to move forward towards an understanding of her life, you might say that she applies a psychoanalytic understanding of time. Lake Attersee is one site of this constant return, a place imbued with both historical and personal importance for Söderbaum. She visits the lake early in the novel and also describes when the Nazis occupied Haus Schoberstein, a place for them to rest that sits above its shore. This is the description of her arrival at the lake:

The lake is a plate of glass, an immense blue-tinted lid of silence, and the evening sky is emptying its light into it, it is the lake that is the source of light, the sky just the reflection; between you and Haus Schoberstein there are now vast expanses of water.

What’s striking here is the image of the sky “emptying” its light. The lake is a motif of concealment, with the water depicted not as an open expanse, but instead as closed, and not just contained, but an actual container with its “blue-tinted lid.” And yet at the same time, this image underpins the expansion of her self-understanding, a place where she will digress and narrate a history that exceeds the confines of her own life.

It is here that we’re also introduced to a recurring and powerful image that represents the experience of confronting history, and helps explain why the lake might be such a source of silence. As she continues to swim she’s deluged by memories and images of her family:

. . . you open your jawbones wide and the scream comes rolling out of the depths like a wave, you are hurled backwards, it is the force of the scream that hurls you backwards as you unleash it

On the jetty afterwards your head is heavy, your legs half in and half out of the water. Sonámbula. Sleepwalker . . .

Considering that the narrator’s sections are told in second person, there’s a sustaining feeling that within this confrontation of self and history, there is something that desires to be expressed, but isn’t. A scream. And so, the mystery becomes ceaseless in The Oblique Place as to whether or not somebody has screamed. Confused by images like this one we ask whether it’s just somebody actually, or trying, or even just preparing to unleash a wail. What’s more, the reference to a “sleepwalker” insinuates that we’re in the realms of battle between the conscious and the unconscious mind: what threatens to be lived consciously here is at the whim of unconscious’ threat to repeat until it is lived.

As she navigates this process of confronting individual trauma, Söderbaum continues to traverse history. But although timelines run beside one another in the novel, it’s as though they’re situated to show that they cannot ever meet and instead must compete for room and voice. A moment when the narrator is young and living with her father and mother encapsulates this tension. As she sits and watches the attempted coup to return democracy to Spain in 1981, her father returns:

the rebellious daughter, in semi-profile, one eye on the intersection of coloured lines on the television screen and the other on him, as if she were wall-eyed though she isn’t, as if she were a painting by Picasso. They slide past each other that way, in full and semi-profile, offering each other only half a face, just one eye just one part, just nothing, no words spoken, no voice.

One can see why her father refers to Picasso and his distorted, cubist portraits as a way of representing how difficult it is for him to come “eye-to-eye” with his daughter. But as I continue to consider the scream that emerges from the collision of history and trauma,  whilst also knowing that it is Caterina who ultimately is turning her gaze to that of confrontation, I am reminded of another artist who could be an abiding presence for her and who did revel in being eye-to-eye with this subject: Edvard Munch. As Sue Prideaux retells in her biography of the artist, relatively early in his artistic life he painted his sister’s portrait as she struggled with her worsening schizophrenia. When he painted her though, he chose to render her “full-faced” and gazing out of the painting. As a result, Prideaux says, he had “looked straight into the eyes of his family’s insanity.”

Now, if we can dilute “insanity” here to mean that which is not known by any system other than one of its own reasoning, we have a compelling image of what it means to confront the past from which we apparently came. Munch went on to paint “The Scream,” but in a way, Söderbaum paints her own version by her similar desire to ask how are we supposed to express all of this overwhelming information about ourselves and of those closest to us? Can it even be expressed? What’s notable about Munch’s famous painting is that when he was apparently inspired to paint it, he was in Ekeburg, where Gaustad, the city’s asylum, was incarcerating his sister. Surely he must have been visiting her, at least thinking about her, when he famously heard “the extraordinary scream pass through nature.”

Yet, like with all of Munch’s thoughts and work, it’s difficult to know whether or not it was a lived or psychical experience. Söderbaum’s dilemma is similar: does the scream — whether or not it is heard internally or voiced — become the modus operandi for our recognition of the traumatic experience, or the instance in which it defeats us? Her grandmother’s reaction to the news of a “massive Soviet attack” on the Blue Division (whom her husband was fighting for), is one such occasion:

Dolores has literally no idea what to do, what she is supposed to do with her hands and the rest of her body, she even knows less about how to go on breathing, she has probably been screaming, but she is barely aware of that, her entire mental focus is taken up with the effort to follow what the voice that goes on talking is saying, as though hanging on every word that voice utters were the only way not to let go and fall into a huge black hole.

This is characteristic of Söderbaum’s long, digressive paragraphs that, in moments like this, not only capture the overwhelming event that’s happening to the subject, but the writer as well. Overload is the burden, rather than any semblance of sense. Dolores, not being able to “let go,” also feels like what Söderbaum is struggling to enact with these thick paragraphs: she is trying to process this. And again, there is in that image of the scream an event that threatens to overwhelm us, and that, if it should let us go, might bring as equally frightening consequences.

It has to be remembered that in the case of Munch’s scream he did not report it as something he did himself; it was something he “heard.” And as with Söderbaum’s narrator’s early encounter with Lake Attersee, it does not seem to be a way to represent his own experience. Another irony then, in a novel that is filled with ironies on a stratum of cruelty, is that the narrator’s own, individual voice struggles for room. The novel is not given the space to be filled with her voice, her art, her history — essentially, be heard. And perhaps one of the cruelest ironies now is that Söderbaum, who died shortly after its completion, will not live to see the international success of this novel today. I sincerely hope that more of her work is translated into English after this staggering novel. But for now, whether you believe the scream that might enable the narrator to look “straight into the eyes of her family’s insanity” has been expressed or somebody’s found a lid and stifled it again, is down to your analysis.