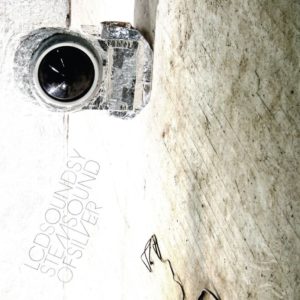 I find it impossible to listen to the fifth track on LCD Soundsystem’s Sound of Silver without the central riff reminding me of the rhythmic rumble of a train on the tracks—a sonic similarity noted, too, by Pitchfork’s Mark Pytlik in his review of the album. There is perhaps no song easier to recognize from across the room, the hall, or the alley.

For a year or so, beginning around when I first heard “All My Friends” in the fall of 2015, I built a small playlist of songs that I came to suspect fit together in some way: each featured a short pattern of repeated notes that replayed throughout the entirety of the song—except, perhaps, for one or two breaks, when each element was peeled off the track, only to be re-layered like a cake, sometimes all at once, other times one layer at a time. Animal Collective’s “My Girls,” “Build Voice” by conservatory-trained Dan Deacon, “Shuffle” by Bombay Bicycle Club, as well as others discovered before “All My Friends,” but added to the category after the fact: Arcade Fire’s “Rebellion (Lies),” Nils Frahm’s “Said and Done.”

The structural similarity between these disparate tracks shapes the songs’ emotional vocabulary. The effect mostly has to do with time. Listening to “All My Friends” elicits, principally, a sense of a loss of control that might seem at odds with the song’s extraordinary structural and rhythmic discipline. The fundamentals of the instrumentation—the iconic keyboard and the bass line—do not change for seven and a half minutes. This structural stability, its utter reliability, is continuous; it appears, like abstract time, to exist independently of subjective experience and its distortions. But the song is simultaneously capable of the same familiar effect as all deeply felt music: the ability to lift one of out of quotidian time and into song-time.

In lyrics that are mostly about getting older, James Murphy relies on the (inevitable?) opportunities for reflection provided by travel—“You can sleep on the plane or review what you said…If the trip and the plan come apart in your hand”—and connects the song not only to the passage of time, as indicated in the song’s structure, but to movement in space as well. This, too, likely has something to do with why these songs attracted me when they did.

In the fall of 2015, I was a student living in Boston but preparing for a semester abroad in China. My room was small and rectangular, on the second story of a house in Medford, Massachusetts. The building to one side housed a state trooper; the other, a group of women who could look directly into our shower any time that one of them happened to be standing in their kitchen. More than any other time in my life, it was a season in which, I preferred song-time to actual time. I spent many afternoons—no one is richer in afternoons than undergraduates—in disciplined idleness. Because my family had no use for it, my late grandfather’s couch sat on the second-floor balcony, and it was there, facing west into the sun, or on a brick wall outside the foreign languages building where the sun was ideal from noon to 4 p.m., that I sat. I preferred to listen in the dark or with my eyes closed. I thought the music sounded better that way.

At that time, LCD Soundsystem had played their last show at Madison Square Garden but had not yet announced their return. For that moment (they would announce the return that December of that year) I found them in the in-between. The band was still something that had happened and would not, people seemed to think, ever happen again. The footage of the Madison Square Garden show, the documentary about it—these conspired against me to produce a maximum sense of nostalgia.

“Build Voice” and Dan Deacon came onto my radar around the same time. Though I alluded to the theme of “All My Friends,” for the most part, I pay no attention to lyrics, so a song’s themes, as far as they are decipherable through those lyrics, generally remain a mystery to me. I cannot recall lyrics to songs I have listened to with pious intensity since middle school. I cannot quite explain why this is, other than to admit that I do not really hear the words—and when I do, I hear the rhythm, the melody, and the harmony before them.

So I have no idea what “Build Voice” is about, but I know that it does the same thing as “All My Friends.”  Deacon, known for his electronic music, builds the song from the ground up. Beginning with just a one-two steady synth-like beat, he layers a player piano gliss and horn jab sequence on top. Eventually, a relentless snare roll brings the song into its cacophonous stage, all of the elements not so much coming as crashing together at once.

Nils Frahm came to me because a different track on the album Spaces, “Familiar,” was used in a ridiculous video behind a voice-over of a poem. But “Said and Done,” from the same album, is the one that belongs to me. Nils hammers a single note around which he builds a series of rising and falling chords. There are no words. The rest of the song rises above and below, thickens and narrows around the line cast by the sustained rhythm. “Said and Done” is especially remarkable because it exemplifies how, after just two or three minutes, the pattern establishes itself in the listener. With 50 seconds remaining, Nils quits hammering and pedals the chords softly. Nearly every song features some kind of suspension like this, though usually the elements return one at a time, beginning with the signature prominent riff. (See 1:44-2:37 in “Shuffle,” 4:22-4:52 in “Build Voice.”) The rhythm passes over to the listener—like a car alarm the previously sustained note beats more or less unabated in my head—as the chords paddle the song quietly to its conclusion.

After an emotionally intense but obviously doomed relationship, I left for China, feeling not less isolated than I was before, but with these songs for company. The characteristic rush of international travel and a violent change of scenery communicated a slowing of time and coalesced into a fundamental ambivalence: the sense that everything has changed unexpectedly gives way to the more sober realization that, for oneself at least, little has. Time resumes its normal course, routines are established, and I adopt the new rhythm of life where I am. The difficult and stubborn thing is determining in what little, imperceptible ways I have been recalibrated. Murphy’s opening lines—“That’s how it starts…You check the charts/And start to figure it out”—capture the kind of personal watershed I sometimes feel I have already experienced and other times feel I have yet to encounter.

Abroad, I am in a language program and forbidden from speaking English, and—weirdly—music becomes the only audible English I digest all day. I sit on the concrete steps outside the building where I am taking classes and queue Dan Deacon, LCD Soundsystem, Animal Collective, and Bombay Bicycle Club. The square expanse of concrete between the steps and the food court is where grandparents often bring their swaddled charges in the morning and afternoon. It is cold in the Chinese city where I live most of the time I am there, and because I have a visa that expires in several months, most days I feel like a ghost. It is almost as if I have been swept or swallowed entirely into song-time, a Jonah whose experience with the music is less temporary, less fleeting than the inebriation that came when I listened to the same songs in the United States. The difference is like that between flying and falling. The visa, like the song, will end, and I’ll be swept back into regular-time. And this is how it is, regardless of how I feel about it. In this lies the lack of control: the reliability of time, nothing but the rhythm.

Daniel Weaver lives in Washington, D.C. His work has been published in Radii and is at danielaxweaver.com.