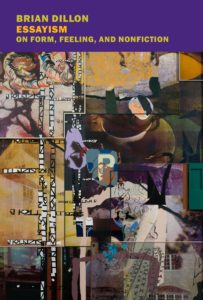 In 1924 Virginia Woolf visited the British Empire Exhibition at Wembley, with its palaces of industry, arts and engineering, its screw-driven “never-stop” railway and its stadium, later home to the English football team. What she saw was a triumph of artifice, to the point of oppression:

The area was too small; the light too brilliant. If a single real moth strayed in to dally with the arc lamps he was at once transformed into a dizzy reveller; if a laburnum tree shook her tassels, spangles of limelight oated in the violet and crimson air. Everything was intoxicated and transformed.

Despite the imperial swagger, says Woolf in her essay “Thunder at Wembley,” notwithstanding the £12 million spent on mounting the exhibition, for all its 27 million visitors, the spectacle is a sort of failure. Nature will have its way, just as history will with the real Empire, with domes, palaces, minarets and pagodas. A storm is blowing at the edges of the site, invading ordered precincts devoted to entertainment and instruction. The massed bands of Empire are marching towards the second city that the exhibition has raised on the outskirts of London, but dust swirls after them, and some appalling catastrophe impends.

The sky is livid, lurid, sulphurine. It is in violent commotion. It is whirling water-spouts of cloud into the air, of dust in the Exhibition. Dust swirls down the avenues, hisses and hurries like erected cobras round the corners. Pagodas are dissolving in dust. Ferro-concrete is fallible. Colonies are perishing and dispersing in spray of inconceivable beauty and terror which some malignant power illuminates. Ash and violet are the colours of its decay.

By the end of the essay the crowd has fled inside frail pavilions, and lightning’s “cracks like the white roots of trees spread themselves across the firmament. The Empire is perishing; the bands are playing; the Exhibition is in ruins. For that is what comes of letting in the sky.” Nature has won against the fake defences of imperial self-celebration. It all starts with a swirl of dust—cobra-like, in that amazing image—and Woolf ’s prose mimics the action of the storm, exploding delicately into flurries of image, sound and metaphor. As so often in her writing, you have a sense of the world becoming particulate, everything airborne and efflorescent or friable, turning to dust, powder, shingle, sand. This writing seems to release spores.

You could make a study of particles in Woolf ’s novels and essays. Fog, rain, mist and dust recur in her writing, working their minute presence, accumulating on furniture and drifting against windows, falling in torrents or oating aloft in the air. These substances are sometimes associated with certain effects of light or its abeyance, perhaps most often with the victory of darkness: a pall falling over the land as she drives through Sussex at dusk, the chilling defeat of the sun in her essay on viewing an eclipse, the shadow that in the latter reaches of The Waves advances without mercy to cover houses, hills, trees, grassy rides and empty snail shells, then snow lodges, running streams and girls sitting on verandas with fans before their faces. When I think of Woolf I think of glyphic dust motes and powdery shadows denoting some vast personal or historical anxiety. We’ll come back to Woolf, most likely many times: her infinitesimal imagination, her rigorous feeling for what is hardly there at all.

I have a friend, a novelist, whose husband studies cosmic dust discovered at the South Pole. Thirty thousand tonnes of extraterrestrial material enters the earth’s atmosphere each year, in the form of irregularly shaped particles or cosmic spherules that have partially melted and so been greatly rounded and smoothed by the time they reach our planet’s surface. Of course most of this stuff would be impossible to isolate, mixed as it has been with the teeming debris sloughed incessantly from that surface itself, shed by the plants and animals that live on it, by the things we have wrought to replace them. But at the bottom of the deepest seas and in the Antarctic—the North Pole being too close to other dusty land masses—scientists can dig into kilometres of compacted snow to find long-untouched strata at which those tiny messengers from the stars have been preserved and out of which they may be extracted. In each cubic metre of snow that is uncovered, melted and filtered, there might be twenty or thirty dust particles, and about half of these will prove to have come from asteroids or comets. Typically they will be composed of silicon, magnesium, iron, nickel and oxygen—though frequently, says the physicist, he finds himself staring at a vastly magnified fragment whose composition is quite mysterious. My friend told me that her husband analyzed for weeks on end one such particle, which was transparent and almost spherical and corresponded, as it sat there on a slide under his microscope, to no substance he or his colleagues had so far come across in their research. And the husband carried on staring at it like this till one day, under the pressure of some test, or simply because it was time, the object disappeared. It had been an air bubble all along.

Shall we take dust as the founding metaphor by which to broach the unruly topic of the essay? For sure, it sounds deathly, as though the form is lost to the world, consigned to libraries and anthologies. (As if those are ever really dead.) There have been times—ours is not one of them, I think I will want to say—when the essay has seemed antique and moribund, fit only for the classroom and to become an object of nostalgia for the improving or diverting literature of the past. Essays, ancient or modern, can seem precious in their self-presentation, like things too well made ever to be handled. Touch them however and they are likely to come alive with the sedimented evidence of years; a constellation of glittering motes surrounds the supposedly solid thing, and the essay reveals itself to have been less compact and smooth than thought, but instead unbounded and mobile, a form with ambitions to be unformed. Which is to say—I can’t prove it yet—that the venerable genre of the essay has something to do with the future, with a sense of constant dispersal and coalescence. And for what it’s worth my attachment to it seems of the same conflicted order: I want essays to have some integrity (formally, not morally, speaking), their strands of thought and style and feeling so tightly woven they present a smooth and gleaming surface. And I want all this to unravel in the same moment, in the same work; I want the raggedness, the patchwork, a labyrinth’s-worth of stray threads. You might say I’m torn.

Brian Dillon was born in Dublin in 1969. His books include The Great Explosion (short-listed for the Ondaatje Prize), Objects in This Mirror: Essays, I Am Sitting in a Room, Sanctuary, Tormented Hope: Nine Hypochondriac Lives, and In the Dark Room. His writing has appeared in The Guardian, The New York Times, the London Review of Books, The Times Literary Supplement, Bookforum, Frieze, and Artforum. He is the UK editor of Cabinet magazine and teaches at the Royal College of Art in London.