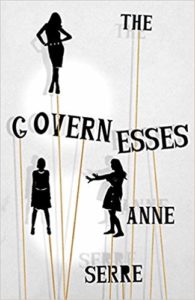 So too, with the eponymous governesses of Anne Serre’s 1992 novel, The Governesses, translated from the original French by Mark Hutchinson. The novel is named after three young women whose pasts have been erased, whose futures are unforeseeable at best, doomed at worst. Under a tireless male gaze (figuratively and literally) they are a single unit, prone to the same flights of fancy and unbridled desires, trapped in a grand estate of their master’s making. Like Picasso’s muses, they are reduced to nothing more than objects (again, figuratively and, eventually, literally) under the Panoptic Male Eye.

Serre lifts the tropes of governesses well-worn from Victorian literature, prominently featured in works like Jane Eyre, Vanity Fair, The Turn of the Screw, and Anna Karenina. These young women placed in well-to-do households were higher in stature than nannies, but neither much older nor higher-stationed than the wards in their care, though they were meant to be beacons of moral fortitude for the young children they minded. According to historian Kathryn Hughes, “The governess was a blank slate onto which all possibilities were open.”

The three governesses in this novel are by no means pillars of morality, according to their employers. Their days consist of party planning, vaguely looking after a gaggle of small boys rolling hoops around the vast acreage of the Austeur manse, and, like sirens, summoning passing suitors to the edges of the golden gates, which simultaneously protect and imprison them. They promptly devour these suitors, or are devoured by them. And though they are individually named, Laura, Eleonore, and Ines operate throughout the book as an inseparable triad of maenads; feelings felt by one are felt by all.

Serre’s language is tight and fabulist, a slim and sensuous fairy tale that reads like something born from an orgy between Charles Perrault, Shirley Jackson, and Angela Carter (hubba hubba). For the most part, the narrative voice of the novel views the governesses with bemused detachment, just like the elderly gentleman across the street who spies on them regularly through a telescope. The narrative is similarly telescopic, often projecting one perceived emotion onto all three of them, particularly their libidinous desires, with puerile pluralism: “Their minds drift back to the stranger: his emaciated face when they had drained all the sap and drawn all the honey from him; his ardent, blind hands searching for something to grasp; his erect member which seemed not to belong to him anymore. They’d love to find him again . . . ”

The elderly gentlemen, exhibiting something of a vore kink, tirelessly watches and yearns to be devoured by them himself. His presence is the clearest symbol of this male panopticon, taking his own pleasures from the governesses without their consent, as they live on as his unassuming playthings, sans memory, sans agency. “They have no family or parents, and not much of a past either, which well and truly died the day they entered the service of Monsieur and Madame Austeur.” Their histories come pre-erased, as Picasso would have wished.

The narrator sheds the same detached and whimsical view as the elderly gentleman does, always at arm’s (or telescope’s) length, never diving into the full interiority of any of them (until one brief turning point — more on that soon).

One cannot help but interpret the narrative voice as an extension of the elderly gentleman’s male gaze, though we know that technically, the gaze is a female one, the author’s. But the narrator restricts him or herself to playing guessing games at the governesses’ emotions: “What unnerves them, it seems, is the excessive silence of the households they wait upon.” They seem to have feelings, though one cannot be certain. Their pasts have been obliterated; like magic, they’ve turned into lovely ciphers:

Where were they from? It’s hard to say. It’s safe to assume, however, that, in spite of their young age, they had experienced some sort of tragedy in their life, at least one. What leads one to believe this is their eccentricity: too much joy, too much grief, a strange frenzy, too much appetite, too much silence. It’s obvious there’s a secret in their past. Nothing out of the ordinary perhaps, but something that has molded their character and shaped the way they move, the sound of their voices, their dreams, their habit of roaming back and forth in the garden with their hands pressed to their temples. The presence of that secret somewhere between the heart and the womb could also be said to have deprived them of free will, but then who can be said to possess free will?

They are reduced even by their boy wards to the trappings of their sex, as one older boy brags that he has “seen the governesses’ undergarments.”

Now, the turning point: the three governesses at last distinguish themselves from each other when Laura briefly emerges as the most valuable (in a very Gilead-ian, blessed-be-the-fruit sense) when she falls pregnant. Still, she wonders, or may seem to wonder, “Why her, rather than one of the others?” Ultimately, the pregnancy is just nine months of distinction, quickly forgotten after the fact, leaving Laura seemingly unchanged. The boy she births is hastily swallowed in the throng of hoop-rolling children, just another assimilated addition to the menagerie of archetypes in the grand landscape of their prison.

The only person Laura’s pregnancy seems to affect is the elderly gentleman. Why? Because she has passed her prime. She is unripe. Withering on the vine. The elderly gentleman resigns himself to the diminishing appeal of the governesses’ folly, “‘One less.’” And then, just as soon as he averts his eyes, they begin to disappear. Almost as if they could not exist without being beheld. If a governess frolics and there is no elderly gentleman to witness it . . . ? The three governesses start to fade, melt away, and become literally objectified.

Picasso believed a woman was in her prime at 17, Hannah Gadsby says. “Do you know how grim that was? Oh, I’m in my prime! Oh, there is no view at my peak.” The governesses of The Governesses are a tragedy, as they never escape the confines of their archetype, their one-ness, their cipher-dom — not to the master of the household, not to the suitors who lay prostrate at their dainty feet, not to Rear Window-y old creeps, and not to the little boys they pretend to raise. They are not just robbed of agency; any glimmer of agency is categorically, mercilessly nixed.

Picasso’s granddaughter said the following of the artist: “He submitted them to his animal sexuality, tamed them, bewitched them, ingested them, and crushed them onto his canvas. After he had spent many nights extracting their essence, once they were bled dry, he would dispose of them.” The very same could be said of the Male Eye that helms The Governesses, a novel whose title belongs to its victims, not its victors.