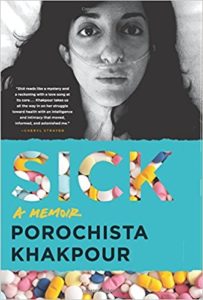 In Sick: A Memoir, author Porochista Khakpour reckons with the history of her body. When she is diagnosed with Lyme disease in 2011, after years of symptoms without clear cause, after hundreds of thousands of dollars in medical bills, after roaming the world without answers and looking for a home in every place she lands, she feels at last that she has been given a reason, that the narrative of dis-ease in her life at last makes sense. Khakpour traces her symptoms throughout her life, from her childhood in Tehran to her family’s emigration to the states, never fully feeling at home in the span of cities she lives.

The memoir itself is segmented by cities, the path of Lyme trailing Khakpour from Iran to Los Angeles, New York, Maryland, Pennsylvania, New Mexico, and beyond. She explains: “It occurred to me that it wasn’t character or plot or even theme that was the ruling principle of its composition, but something far less likely: setting. . . . I’d be destined to never find the bite on the location of my body, just as I’d be destined to never know the location I was in when bit by the tick. The issue of where would be the most mysterious of all.”

In pinning down her body’s reasons, Khakpour ponders if she would have been less sick if she’d had a home. When she emigrated with her parents to the States, she was told for years that the move was temporary, that she oughtn’t think of putting down roots. “This isn’t your home, my father would say when we got to the US. We’ll be going home again one day soon. He said that for three decades. Maybe he still says it.”

“I’ve been an outsider my whole life,” Khakpour stated in an interview with Eye Level Magazine. “I don’t belong to any culture.” Living in America, the proximity of an excellent school system “was all that mattered to my parents, my future still a thing not ruined.” The most heartbreaking parts of the memoir are in her relationships, ever changing, with her parents. As she wrenches through her body’s reckoning, they deny her, disbelieve her, and retreat from the facts of her illness. When the peak of illness takes her over in New York City, she seeks the safety of “a parental component.” Still she must persuade her parents that her illness is real. A letter from the author to her mother reads: “dear mom, i am sorry for any trouble i am causing. I love you very much. I thought we could try one thing that i tried to ask the other night that embarrassed me — i wonder if you would consider sleeping in my room? I can keep your exact schedule. I feel really ashamed and unhappy at all the unhappiness i am causing. Please know i do not want to be sick. It is my dream to be done with doctors. P”

Statistically, women suffer the most from Lyme, and are also the least likely to be believed. Khakpour learns first hand, long before her diagnosis, that empathy doesn’t come easy, especially with a chronic illness about which so little is known like Lyme Disease. Her ex’s mother suffered from chronic Lyme and her boyfriend, when hearing her complaints, “would shrug, and sometimes in his passive indifference to his mother’s state I wondered if he actually believed her. When we had initially started dating, he had told me My mother would do anything for attention. It didn’t seem impossible.”

Though the book is divvied by setting, they could also easily be demarcated by the bevy of white knights in the form of lovers and boyfriends who love her despite and also because of her illness. These men are either non-believers, men who pride themselves on bravely rising to the occasion of loving a body despite its illness, men who insist that they love her even more for it. Luckily she is self-aware of the hordes of men glutting these pages: “I admit to the fact that I remember the years in terms of relationships, that I count the men on my hands like they were truly parts of my body, all in the end that I was made up of.”

By her own admission, Khakpour has never been a “good sick person.” Of course, the public-facing myth of the good sick girl is a myth that Khakpour is intent on breaking throughout her memoir, and her crystal clear intent, the nuance, is successful. “I am not a poster girl for wellness. I am a sick girl. I know sickness. I live with it. In some ways, I keep myself sick.”

Recovery can be a performance too. The end of the journey or end of the story is a non-existent thing as of yet, as Khakpour demonstrates. The illness lives on. Khakpour gamely confesses “you are reading the middle of this story, I suspect, but I’m not sure where or when it will all end, so one might as well tell it now.” The final editing process of putting her book out into the world was stymied by illness, too, even as she struggled to reach an ending, or perhaps a mere completion without resolution, of the story of her sickness.

The journey to the completion of this novel was not a steady and linear one: “in the winter of 2016 I fell into the darkest depression since 2011. That I survived to write this is the greatest miracle of all.” In an epilogue, the journey continues. The book we are holding in our hands is “the Book I Sold,” not a static physical object but a living, breathing document. “The story didn’t end as I imagined so many times: in the end I would make it.” But full recovery can be a myth in and of itself.

Khakpour fights against being defined by her illness and whittling herself down to just the sick parts of her life, nothing more than a vitals chart. As a woman who relies so heavily on her brain and its attachment to her body, the tension of the two being diametrically opposed is a tumultuous experience alone. “The hardest thing for me with those breakdowns was losing the one thing that made me happy: the ability to write. I could not form a sentence, my imagination seemed crippled, plot and characters seemed so abstract, theme an impossibility, all syntax and diction just puzzles that were unthinkable to piece together.” When a nurse researches her list of accolades in writing and academia, she bursts into tears: “‘My God, you had a whole life.’”

In many ways this memoir functions as a reflection to show the author that she is not her sickness. She is in fact “a person whose intelligence had driven her, not a train wreck, a child, a drama queen, a hypochondriac, a basket base. No one is just those things, and sometimes no one is those things at all.” It is abundantly clear that this memoir, ever shifting and never what she planned, may be the greatest and most multidimensional mirror of all, living on inside of her.