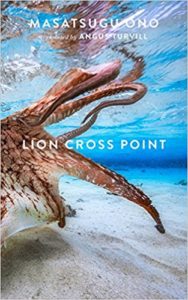 At the same time I read Yasanuri Kawabata’s Dandelions, I also read Masatsugu Ono’s Lion Cross Point, translated by Angus Turvill. Simultaneous readings affect each other, and I was struck by how both writers use quiet prose to hint at things. The structure of their sentences is direct, but meaning is slant. (I say this without claiming this style as some “inscrutable Japanese” trait.) Keeping such a fine balance is a challenge in translation, walking that same dangerous walk as the original, and Turvill succeeds. Lion Cross Point is not old-fashioned, yet not blatantly modern either. In an isolated setting, a young boy is about to be lost, and there’s a sense of being out of time. Contemporary moments, simple as use of a cell phone, are surprising. After the surprise, they are grounding, and Lion Cross Point is about finding ground, safe ground, even if it is painful.

Takeru is a ten-year-old boy spending a summer in the village his mother grew up in, with people who knew her years ago. They are strangers, but together they fall into a rhythm of life, a caring one. Under that care is a constant unrelenting tension. The village is a peaceful place, a seaside where, as it goes with childhood summers, time both stretches and collapses. Incident and absence of incident overlap. For Takeru it is not just a childhood summer, but the summer of his childhood, a center for his life before and his life to come and everything has potential to let the unspoken, the tension, into his life—if he can allow it, if he wants it, if it won’t break him. Those things we don’t know, which Takeru turns from, come with weight. It is a summer where, “The mosquitoes hung in the air, impotent yet threatening.”

Takeru’s mother is nowhere to be found and the people around him hesitate whenever they have something to say about her. His brother—who is older though often presumed to be younger—is never spoken of:

They occasionally brought up his mother, but never his brother. It was strange. It was almost as if he’d never had a brother. Perhaps he hadn’t. Was that the truth of the matter? He wished it was.

Takeru remembers his past, thinks of family, but that word, family, is hardly used, and maybe not at all until halfway through the novel, where it immediately breaks: “he could hear the violent breathing from the tatami room where the family slept (no . . . his mother hardly ever slept with Takeru and his brother).” If she has disappeared now, leaving him alone in this village, before she was only half-there. The reasons for her half-presence slowly become understood, but the reason for her disappearance is pointed at but never spoken. We get to know Takeru and his village life, and we follow his remembrances of his mother and piece her together. We learn little bits about his brother, but they are bare observations, often unclear, that go without explanation. The lack of knowing makes it feel the answer may be a threat to Takeru, to his stability, his peace.

Identifying anything from the past in the book as simply remembrances is an error. The scenes exist between Takeru’s memory and the not-quite-omniscient narrator. The narrative trips in time, narrator and Takeru tripping together, neither in control of when the past will crop up, or when one bit of the past will fall back or forward into another. There, in the past, where his brother should exist, he’s often an absence, even when he’s present:

Takeru was standing at the entrance to the tatami room. He glanced over his shoulder.

Even when the family was together, his brother was meant to be a secret, hidden. We learn this through Takeru’s fear when he understands a classmate’s mother knows his brother exists. His brother takes shape by the way what is said grazes against what’s not—what Takeru sees and remembers but what he doesn’t let himself think clearly—and the larger the absence grows, the more it pushes against boundaries, threatening to become fully acknowledged. What was his brother really like, what challenges was he living with, and what happened to him, where is he?

Lion Cross Point is a story of trauma recovery, but it doesn’t insist on that. For Takeru, a child, the recovery is not conscious, not one of intent or practice, but of life. It manifests not in a physical manner, but at least in a visible one, if only visible to Takeru. He sees, and hears, someone no one else can, someone much like his brother, mentally younger than he is physically. Bunji, a distant relative of Takeru, was a child who died long ago. In the opening pages, Takeru recognizes him in a photo as a person he’s already seen, already dreamt. This figure—a ghost, not quite—will appear, and speak to Takeru, throughout the novel, with the mystery of his fate, his appearance, and the absence of Takeru’s brother all quietly intertwined in a way only Takeru can begin to understand, an understanding he may not be able to escape.

Clarity, understanding, and connection—these are things Takeru’s trauma keeps him from, things he slowly, abstractedly, moves towards. He’s removed and uncertain, discerning facial expressions can elude him, confuse him. One of the tricks that Ono pulls on us to maintain ambiguity is keeping Takeru distant from us, too. Takeru returns home one evening worried about his brother, not his mother, he “sighed as he reached the doorknob—a sigh so harsh and heavy that it hurt.” He enters and

He stepped toward the room from which he’d heard the terrifying voices of his mother and the man entwined together (he probably knew what was really happening). He peered in. His brother was lying on his stomach, half on and half off a futon, sheets and covers in chaos . . . Even if he did know what had been going on between his mother and the man, he was probably still worried about his brother. There was no more pretense in that feeling than in his regret at having left him there alone.

At the beginning of the passage, and for most of the novel, the narrator is fully omniscient, tells us exactly what Takeru is thinking, feeling, experiencing, but a cloudiness passes over. There are moments when the narrative loses omniscience, is impressionistic at best. Sometimes, it’s Takeru’s own unknowing, other times it’s as if Takeru withdraws, protecting himself from the invasiveness of a narrator, or reader. Or is Takeru hiding not from our invasion, but from himself, creating an interior blindness? Either way, translating these narrative shifts is a beautiful effort by Turvill, and like beautiful efforts, can go unnoticed.

Detached from processing his past, Takeru is also detached from everyone around him, but not alone. Ono is nuanced in his creation of a community and family. They slowly open to Takeru, as he does to them. Together they create space where the past can take a new shape in the present, where those fears, that burden of unspoken guilt can open and be something Takeru can carry into a future. Presence slowly replaces absence, in more than one way. Takeru did not have a father, only men who passed through, helping or damaging. In the village, Takeru finds men who are father figures, but they are men aware that this is a little boy without a father, and they become something. It’s these men, and the better angels of his past, who quietly give him space to talk, to think, to question, that clear his way forward. They question, and they withhold:

“No,” said Takeru, shaking his head.

Ken looked as though he wanted to say something else, but left it at that.

Even as they help him, the people of the village are as afraid of the past as Takeru. They’re afraid of hurting him, of wrenching out pain and awareness he isn’t ready for. Guilt and tragedy hover over them all, but so does forgiveness. The guilt may be unfair, it may not be—can guilt and responsibility be parsed?—and the adults don’t know how to expose it. So they circle around it, marking the outline. This only draws his, and our, attention to it, and so he questions it: “For some reason, Takeru thought of his brother. It was strange that nobody ever asked about him.”

These are the people, this is the summer, and this is the place that Takeru needs to listen to that voice within him trying to speak, to extract the past. Like Kawabata, Ono uses the natural world, the landscape, the atmosphere. At times it manifests a looming threat that Takeru feels:

An ant crawling around on the tatami would occasionally fall victim to spit falling from the sky. It would writhe around, waving its legs and antenna. With the air so hot, the liquid quickly evaporated, but even so those ants must still have wanted revenge.

Lion Cross Point itself is both threatening and beckoning. The beckoning eventually wins out, a call that these people he comes to know and who come to know him support. The consequences of his response are his to find and his to face, ours to read between what is written.

P.T. Smith lives in Vermont. He’s the Creative Director for The Scofield and Assistant Editor for Asymptote. He was a Best Translated Book Award judge in 2016 and 2018. Judge him on Twitter @PTSmith_vt