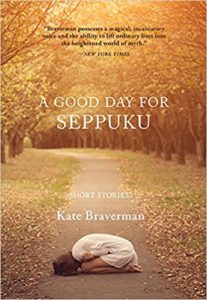 For Kate Braverman, acclaimed author of the new short story collection A Good Day for Seppuku, the kids are decidedly not all right.

A native Angeleno who splashed onto the scene in 1979 with Lithium for Medea, Braverman was the West Coast’s answer to Kathy Acker; a little less Patti Smith, a little more Bob Dylan. Many stories in this collection are love letters to the Golden State (her repeated descriptions of blossoming bougainvillea seem right out of SNL’s “The Californians”), though the locale also pendulates eastward, specifically to the manicured college campus of Northern Pennsylvania and the better-read-than-thou academics who populate it.

These eight stories are in constant dialogue with each other, stylistically (perhaps to a fault) but also thematically. Motifs and characters recur throughout the collection like old wounds opened fresh again and again: mothers pine for their estranged, addiction-riddled daughters; children learn their parents are more unreliable than they ever imagined; professors and intellectuals find themselves at odds with a new generation.

This resistance to the new, the now, shared by both characters and the author speaking through them, creates a compelling if not always intentional tension. Braverman seems for the most part, in her values and in her writing style itself, not to give a damn about immediacy or relevance. Her poetics often forsake pace, and her palpable disdain for a newer generation of writers, waffling from maternal concern to out-of-touch condemnation, wedges a chip firmly into the shoulder of the work.

Lithium for Medea, Braverman’s first novel and the work for which she is arguably best known, is a semi-autobiographical bildungsroman from the perspective of a young, troubled, drug-addled woman struggling to snip the apron strings that tether her to her toxic mother. That perspective echoes still through these stories, though it seems a little staler now all these decades later. Instead, Braverman seems to empathize even more so with the motherly role of eternal worry, hand-wringing, and even contempt.

The stories were written from 2005 to the present day, but reference to modern technology is either notably absent, outmoded, or referenced with disdain. In “Women of the Ports,” estranged friends communicate sporadically throughout the years by “email, fax, and newspaper clippings.” The sundry baby boomers listen to NPR, Aerosmith, Alice Cooper, and jazz. At least two different professors despair at their students’ preoccupation with technology the characters themselves don’t seem to have a grasp on: Mrs. Barbara Stein, in “Skinny Broads with Wigs,” is a rigid professor who spends her spare time searching for her estranged daughter in California. She pontificates derisively about her grad students:

Mrs. Stein doesn’t think there is much field left for the written word. It was once a frontier, a primitive meadowland like the acres of shoulder high Mustard, Purple Thistle, and Golden Rod beyond her apple orchard and gardening plots. It’s become a squalid cul-de-sac, a footpath littered with garbage you can’t find on a map. The quality of books has changed in her lifetime. They’re constructed from a different sort of paper and poorly bound, as if intended to be discarded. They’re like cereal boxes rather than sacred artifacts. . . . In truth, few of her students want to read. . . . Sentences and paragraphs are tedious, irrelevant like fortress walls. They don’t believe books provide revelation. Words are a version of stone. Her students spend afternoon in computer chat rooms, employing aliases, and inventing constantly evolving identities. They exchange texts they mistake for accurate approximations of their values and psychology. They don’t recognize they’re engaged in acts of fiction.

Both “Skinny Broads with Wigs” and “Women of the Ports” make reference to the so-called “global village” (in fact, the young woman in the latter could very well be Mrs. Stein’s estranged daughter in the former). But this global “warehouse,” as they call it, is not a way of uniting the world through mass communication but a way to silo it, “an abrupt compression” in direct opposition to “half a millennia of books.”

In a telling interview with Bay Area paper The Mercury News, Braverman holds court: “People in today’s digital world, [Braverman] insists, no longer listen or read well. ‘Everyone wants the bottom line so they can move on. The nuances and resonances are seen as irrelevant.’ She thinks that women writers are particularly constrained; their stories are often filled with good girls whose transgressions are trivial. Young writers are often ‘stained by a lack of historical knowledge . . . Even worse, the overall culture encourages people to think they can be writers simply because they know the alphabet and how to put a period at the end of a sentence,’ she adds, with emphasis.”

Her resistance to contemporary fiction (populated with these ignorant “young writers” she speaks of) can’t help but tendril through her book like a delayed poison, staling the stories with a retro dew, the product of experimental boomer fiction that may not have lost its bile, but has lost its bite. Besides her political incorrectness (the triple-appropriation of “seppuku,” the Japanese suicide ritual by self-disembowlment which crept into mainstream America in the late 70s with the smash novel and TV show Shogun, is several shades of out-of-touch), her pessimism is ultimately unhelpful, uninsightful, and uninteresting in the contemporary landscape of fiction she so scorns.

Braverman also has little concern for pace or cohesive plotting. Many of her narratives occur in the present as the past looms, encroaches, is expounded upon, detracting from the immediacy of the present moment. Critics have praised Braverman’s capacity for detail, so vivid they “feel like memories,” according to Publisher’s Weekly. In fact, they are more like partially-remembered dreams: when your subconscious tries to focus on the dream image, it shifts in flux, new contexts, new faculties drifting it further from what you thought it was.

This may be because Braverman is never content to describe something once. It’s almost as if she can’t pick her favorite descriptive darling so goes whole hog, her similes piling upon themselves with the intent to get at the exact nature of the thing, but only making the thing hazier and more unclear than it was before. The often-abstract comparison, rather than offering new insight into what they describe, imprecisely overlap, Venn diagrams overstuffed with imagery.

It is almost as if the reader is going through the brainstorming process with the author.  In “What the Lilies Know,” a woman’s communication with her estranged mother is described in a string as “code,” as well as “a network of implications” and also “arrested partial sounds like passwords.” In “Women of the Ports,” time lost between friends is all at once “driftwood,” “vessels lost at sea,” and “a drowned stranger.” In “Feeding in a Famine,” a moment of connection between two characters is waylaid by an extended description of the landscape, “lightning pink and lavender like neon party streamers,” [any other colors?] “rain on fields and horses, everything a sodden dark green,” [is there something like streamers though?] “a sunset that dust has turned into unexpected strands like lava,” [one more] “summer opens like an oven.” [That’s the one.] The line she lands on could do a lot of work for the lines before, and with this final simile she recaptures the reader because it is so true. Summer does do that.

It’s safe to assume that as a maximalist, Braverman is a firm refusenik of the Lish school of concision. Still the shortest story in the collection, “Cocktail Hour,” reads like an unseen draft of Raymond Carver’s “One More Thing” before Lish got his paws on it. In Carver’s story, the man’s wife fixes him with a fierce and disquieting gaze. In “Cocktail Hour,” “the green in his wife’s eyes intensifies.” [How though?] “It is like observing a river coming out of a mist.” [Maybe…] “Or emeralds just professionally cleaned by sonic wave devices in a jewelry store.” [Bingo.]

In 2005, Ben Marcus namechecked Braverman in his Harper’s essay “Why experimental fiction threatens to destroy publishing, Jonathan Franzen, and life as we know it” as part of a crop of writers who refute the standard rigidities of realism, who “interrogate the assumptions of realism and bend the habitual gestures around new shapes.” But with uninformed and out-of-touch scorn for literature as we know it today, a literary landscape she very well may have helped inspire, it seems that Braverman’s once-experimental bite, precision, and resonance has turned bilious and loose. Like a Jackson Pollock of purple similes. [Meh…] Or like darts into jello.