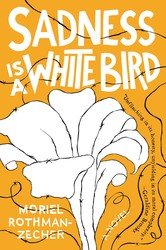 In Sadness is a White Bird Moriel Rothman-Zecher writes about serving in the IDF, the Israeli Defense Forces. But Rothman-Zecher never actually served: when he was drafted he refused and was sent to prison for it. That’s a story he told in a New York Times op-ed, opening it with a dialogue between himself, a conscientious objector, and an indignant right-wing soldier in jail for desertion. The same dialogue appears in a slightly different version in his novel Sadness is a White Bird:

“What are you in for, man?” he asked. The prisoner had mucus in his voice, greasy hair.

I couldn’t tell him the truth. I’m still trying to figure out how to tell you the truth, how to tell myself. I was

too tired to cower, though, so I lied in a way that felt, for a moment, anesthetic.

“We’re doing fucked up shit that I don’t want to be a part of anymore,”  I said.

“No, to the Chinese,” I said. Now I knew myself as someone to be feared.

“Are you some kind of Arab-lover or something?” he said, his eyes bulging like those of an insect.

“Are you some kind of fascist or something?” I said. My lie had gelatinized in my mind enough that I almost

believed, for a moment, that this, all this, was just about politics, Laith.

The difference between the two versions, the op-ed and the novel, is the strength of Sadness is a White Bird. While Rothman-Zecher portrays his own refusal to serve in black-and-white terms, the path of Yonatan, né Jonathan, the main character in the novel, is propelled by the novel’s tragic events, which are at once political and entirely more emotionally complicated than the (false) dichotomy of Israel and Palestine.

Yonatan, like Rothman-Zecher, is American culturally, though Israeli by parentage and birth. He and his family move back to Israel because his maternal grandfather, a stolid Zionistic patriarch who came to Haifa from Salonica during the foundational years of pre-state Israel, is dying of cancer. Yonatan’s mother returns only reluctantly, having left Israel to escape its growing right-wing bent. That is a direction that she attempts to prevent Yonatan from taking when they return by making him learn Arabic and introducing him to the family of an Arab-Israeli friend. Yonatan meets the twins Nimreen and Laith, and the plot of the novel is set: all hearts are going to break. The events of the novel are relayed by Yonatan to Laith in epistolary form, immediately suggesting a distance that cannot be breached, not physically.

Physicality is central to this book. At first jarring, Yonatan’s gaze is intensely male: there are a lot of breasts straining under sweaters for him to notice. But there are also a lot of male bodies that he sees and touches, and this doubling gaze eventually reveals the queer nature of his narrative. Over successive weekends spent with Nimreen and Laith his mostly romantic relationship with Nimreen becomes intertwined with his equally deep but unconsummated love for Laith.

In some ways every work of Israeli literature is about the Israeli-Palestinian conflict, but some of them, like Sadness is a White Bird, are trying to solve it. It’s quite a goal to set, for any piece of writing. Using love as a way to resolve the conflict, love for all bodies, radical love, queer love, interfaith and interracial, might be as effective a strategy as any. It’s definitely one that appeals to me personally (full disclosure: I’m not Jewish or Arab but I am an Israeli citizen, through marriage to an Israeli Jew and a recipient of all the corresponding privilege that comes with that). Yonatan is a character who is thoroughly subsumed by the institutions in his life and the case against them is strong: we see him in grade school in America, at Zionist sleep away camp, in the army in Israel, and ultimately in jail. But probably the most powerful institution in his life is his family structure with his Palmach-veteran grandfather at the top. The only unstructured relationship he has are the Fridays he spends with the twins. While it’s an approach that risks fetishizing Nimreeen and Laith as liberating Others, and also as erotic objects, Sadness is a White Bird manages to avoid doing either of those things, maybe because it doesn’t entirely rely on the friendship, and more-than friendship, to carry all the burden.

As the novel unfolds, set pieces introduce Israeli and Palestinian culture and, for better or worse, their shared history, all with a goal of rejecting the Occupation while still firmly asserting the moral justification for Zionism, if not the one we got in practice. Rothman-Zecher gives equal space for atrocities committed against Palestinians (Nimreen and Laith’s grandmother was present at the infamous Qfar Qasim massacre) and against Jews (his grandfather’s entire family in Salonica, including his gay brother Jacko, like the rest of the city’s Jews, are sent to their deaths in Auschwitz). As the situation worsens, Yonatan himself becomes actor in an atrocity, in a scene that now reverberates with the recent IDF shootings of protesters at the Great Return March. In the novel, it’s a series of events that recall Leslie Marmon Silko’s Ceremony, where Tayo believes that he sees the face of his uncle in the body of a Japanese POW executed in front of him. Similar horrors of war populate Sadness . . . , but the psychic trauma in Yonantan’s case doesn’t derail his life as it does with Tayo; instead it shocks him out of his excessive trust in the institutional.

There is a balance here between the two aspects: the dramatized historical events and cultural signposts, and the more personal love and friendship between Yonatan, Nimreen, and Laith. Readers who, like me, are familiar with a lot of these embedded historical and cultural details might find them too didactic, if it weren’t for the emotional heft that the characters give these events. Sadness is a White Bird has an effective way of actively teaching empathy. It is trying to give voice to a dialectic that is difficult to find outside of the project of Israeli hasbara, the official line of Occupation-friendly public outreach. Hasbara means explaining, and in its own way, Sadness is a White Bird dramatizes a necessary counter-hasbara. That by itself could stifle a book, but Rothman-Zecher avoids it, by grounding the book in a real friendship. So much of this book features laughter, with almost hyperfocus, that it belies the title. Personally, I can account for the particular sound of laughter here that stands out in stark contrast to the way laughter sounds in English, and that may be why Rothman-Zecher gives it such priority. It feels important here, though the source of the laughter, as the jokes and wisecracks these characters make often show, doesn’t seem to warrant the response. I’ve been gone long enough to not be able to say for sure if anyone even laughs in America, but if they do, it doesn’t sound like this. At his lowest point, the same becomes clear to Yonatan, who remarks to Laith: “We were always laughing when we were together.”

They also dream together. They dream of growing into the adults they will become, of being freer than they are, and they dream of one another. It’s a dream infused with poetry, like this novel is. In one part of the book Jonathan and Laith and Nimreen sit on the ruins of what was once a Palestinian village, the hometown of the poet Mahmoud Darwish, now an ordinary Israeli podunk town, and Nimreen recites the words of his poem “Identity Card.” It’s a poem that has recently become controversial again here in Israel; spurring a government backlash after its reading on Army Radio. But it’s another Darwish poem that is felt more strongly throughout the book, “A Soldier Dreams of White Lilies.”

He dreams of white lilies,
an olive branch,
her breasts in evening blossom.
He dreams of a bird, he tells me,
of lemon flowers.
He does not intellectualize about his dream. He understands things as he
senses and smells them.
Homeland for him, he tells me, is to drink my mother’s coffee,
to return at nightfall.
I asked him: and the land?
I don’t know it, he said.
I don’t feel it in my flesh and blood,
as they say in the poems.

The flower motif also fills the pages of Sadness is a White Bird. They appear mostly on the bodies of his Arab friends, but eventually also on the floor of the jail cell where Yonatan will arrive and, finally, begin to live his own dreams in flesh and blood.

Anthony Michael Morena is a writer from New York who lives in Tel Aviv. He is the author of The Voyager Record (Rose Metal Press, 2016) and assistant fiction editor for Gigantic Sequins, a good-looking, biannual, black & white literary arts journal. His writing has appeared in The Establishment, Ninth Letter, Flapperhouse, Hobart, The Mondegreen, and The Ilanot Review, where he has also been a guest editor and interviewer. Find him on Twitter @anphimimor and at anthonymichaelmorena.com.