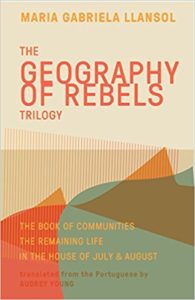 Geography of Rebels gathers three short books by the Portuguese writer Maria Gabriela Llansol, who was born in Lisbon but moved with her husband to Belgium during the regime of António de Oliveira Salazar. There they joined a cooperative in the hamlet of Herbais, taught at an experimental school, and made and sold furniture and food. In The Book of Communities, The Remaining Life and In the House of July and August, fragment flows into fragment with a marked disinterest in any conventional plot that might guide the reader, yet a common tone binds the three works. Names recur, most notably that of Ana de Peñalosa, along with those of several famous, mostly German, mystics from the past. As this group goes on walks, talks, observes the surroundings and writes, Llansol inhabits one mind after another, constantly shifting the view.

The experience is that of reading a kind of poetry, in which the primary objective is not necessarily clarity of content, but rather the production of a certain emotional state. The text itself often splits into a visual poetry of columns, staggers into fragments ragged in unusual ways, and dissolves from solid paragraphs into sections cut by line breaks. The writings, grouped under various quirky titles, read as if they come from a set of personal notebooks, and could extend forever; indeed, Llansol’s Guardian obituary reports that “she leaves a cat, and hundreds of handwritten notebooks and diaries.” There is an echo of Pessoa and his trunks of unpublished reflections on the self, but Llansol is more lyrical and less ironic. A coolness of tone permeates her work, which might be melancholy or serenity:

Her memory ebbed away as if she were old. Or as if she were about to begin another life with new memories forming. The knowledge she had laboriously learned in adolescence and childhood abandoned her quietly, leaving no trace. She was not sorry, nor did she feel the need for it. She then decided she should write, a skill she still remembered, what she thought. The same or a different one. She died, but metamorphosed, taking an absurd transitory form, stitched together by her new memory.

Llansol’s books explore the notion of a mystic view of history. She is particularly interested in medieval Germany, from its peasant revolts to its philosophers. But she is not a social historian engaged with external events; rather, she takes a view inspired by her readings from theology and literature. Nietzsche is one influence, made explicit in phrases like “in the eternal return, Ana de Peñalosa saw Nietzsche coming out of the darkness and suffused with language descending the river, the river of the idea.” This “river of the idea” is extended in explorations of the Tagus, Tigris and Euphrates, and is suggestive of a notion of both flowing prose and flowing time.

In Llansol’s version of eternal return, chronology dissipates such that one thing is not told after another in sequential order. Rather the narration cascades from person to person with a constantly shifting “I,” in the same way that a wave is atoms of water constantly changing while retaining substance as wave. People’s voices come to matter more than specific events, and the “facts” of national and universal history cede importance to an “evolution of interior transitions.”

“It is in exile, in the outside of the outside, that the network of figures, like Ana de Peñalosa, Nietzsche, Saint John of the Cross, Eckhart, Müntzer, Hadewijch, and others, takes root in order to receive the myth of the remaining life, and wonders whether there will be a place in the human body, among their bodies, where fantastic cosmogonic changes correspond to incredibly slow social mutations,” writes Llansol. By “remaining life” she refers among other things to the life that always remains outside oneself, all those other selves possible.

Llansol’s perspective is rooted in her understanding of the historical mystics she mentions, who were able to articulate the relationship between individual body, collective body, God and history. As she enters different minds, all the same I, there is no exclusivity of affection. The materials for anecdote invariably disperse and leave behind traces, as a direct relationship with God means that the writer’s voice can echo everywhere, situation ebbing into situation, contours blurring.

A passivity exists in the organic flow of Llansol’s “experimental mysticism”, but this passivity need not be isolating, as Llansol develops the idea of a community of consciousness. A community is a group that we belong to by choice, aesthetic association, closeness in tone, and preference for levels of hardness or softness, irony and sincerity. What does it mean to think of mystics from the past as not dead personages, but friends still living, with whom you can walk, chat and feel? What does it mean to create a community with the dead as real as if those people were alive?

Llansol describes this community vaguely, through a mist of words that reaches for the intangibly beautiful lyricism of the mystics. She makes it clear that she wants to reinvent language, to speak it from the inside with an abstraction akin to light filling a room, such that the social history of peasant battles and armed struggles form a clanging armour for more luminous truths. Often she reaches for the metaphor of sewing: a way to bring parts together and embroider reality so that the fabric holds together. Writing takes on a special importance as a means to replace old knowledge with more fluid understanding: “Once again she thinks about using the writing that always served as her as laboratory and alchemy.”

Llansol’s method of writing draws attention to her process of reading, in which she does not see books as entities outside herself. When she reads the diaries of others, she incorporates their experiences, assuming them as part of her own life. Names might be understood as allegories for real people (“Neither Hadewijch, nor Nietzsche, nor Saint John of the Cross, nor Eckhart, nor Beatrice, nor Lorenzo de Medici, nor Müntzer were present but they could not be distinguished from celebrated words and real tenderness”) but they are not only this. Drawing from real biographies, Llansol constructs an archetypal landscape in her imagination, in which all figures are present at once, interacting in the most physical way possible.

In what sense are those in the book “rebels,” as the title of the trilogy would have it? To be a rebel is, perhaps, to think about what space and time can do, and to fight for “the demands arising from the final myth: extending the theological dignity of souls to the entire zoologically human body.” For Llansol, the battle takes place on the terrain of language:

It was a pure and verdant language, with resonances of a journey, a well dark in its depths, an animal lying in the water that I took for a reflected white form, with fur, wings, and a strong, agile skeleton where I passed by without finding myself; it was a language still so young and perfectly bright that I used it to begin thinking about what, in the future, I will write to you.

Geography of Rebels is an exploratory text, not the kind of narrative that Deep Vellum usually publishes. Although the editors and translator have not reorganized the content, they have made the editorial decision to publish these three short individual novellas as one tome, and to retrieve this work by a female author interested in mysticism. Whether this represents a hat tip to contemporary trends of publishing women or a deeper interest in such meditative works remains a mystery. The marketing material pushes comparisons to Clarice Lispector, but beyond the common substratum of Portuguese, the two writers really are quite different. Lispector is highly self-conscious, and coy with the desire of her readers; her prose often resembles an extremely sensuous yet detached game of cat and mouse, always coming back to an exploration of her own self. Llansol reads as more sincere, more genuinely absorbed in religion and historical mysticism, less interested in “hooking” the reader or crafting infinite strategies to attract the reader to what she is saying. She does not seem to be interested in the kind of games that Lispector and others play (even if they ironically deny playing them), and she is only just barely interested in the artificial exercise of editing and rearranging paragraphs into neat shapes. Life for Llansol, at least going by these books, seems to have been something more flowing and organic than even an agua viva of the “I” as Lispector defines it. A great part of the appeal of Llansol’s work is the way that it follows the consequences of dissolution to their extreme, as the “I” transforms into other people beyond oneself, the present moment transforms into other histories beyond the present time, and human contact transforms into a wholeness beyond the constraints of the written page.

An Apprenticeship or the Book of Pleasures – Clarice Lispector

Rituals Performed in the Absence of Ganymede – Mike Corrao