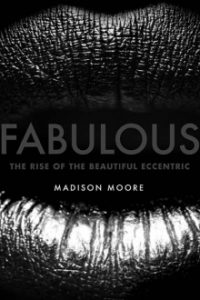 Fabulousness is a visual phenomenon. But it is also a phenomenon of glamour, extravagance, and excess. So much so that fabulousness, while based in our sight, exceeds that visual understanding, jumping out and overwhelming our other conceptions of the world. This is partly what draws me to madison moore’s black and white author photo on the back of my review copy of his new book. His face is serious, glancing at the phone he points at a full-length mirror. Reflected there, he’s sitting on a white chair shirtless, wearing just underwear. While this partly nude author photo is uncommon, it’s probably more honest about the state of undress in which most writing is done. But moore punctures this revealing look at himself with a bit of fabulousness. His legs drape down a white chair to two black high heels, resting gently on the floor. The photo plays with shadows and frames, as moore’s mirror selfie demonstrates the same interplay between the revealingly personal and fabulous exteriors that he brings to all of his subjects and interlocutors throughout Fabulous.

I start with moore’s author photo because it illustrates the descriptive excitement that drives Fabulous. moore builds the book’s chapters around the outfits, looks, and performances he encounters walking down the street, dancing at a club, and scrolling through Instagram. Even his forays into fashion and cultural history proceed with the excitement of two friends catching up over drinks. While the book traffics in rich analyses of the visual, aural, and performative ways in which fabulousness manifests in everyday life, moore’s decision to set all this down in a two hundred-page work of cultural studies, published by a university press, suggests that he might be showing us not just “How to Work a Look” (the title of his second chapter) but how to work a book as well.

How do we write fabulously? Throughout Fabulous, moore explores how the glamourous, extravagant, and material aspects of our world might manifest in language. He peppers his text with bits of dialogue that recreate moore’s world for the reader: “This kid is FABULOUS!” Methodologically, moore adorns himself, like tonight’s outfit, with a dazzling array of aesthetic and historical interlocutors. He invites us into conversations that include economist and theorist of “conspicuous consumption” Thorstein Veblen, a nervous tourist about to get turned away from exclusive Berlin club Berghain, and voguing superstar Lasseindra Ninja. moore moves as quickly between such preeminent cultural critics as RuPaul and Sianne Ngai as he switches from discussing someone’s shoes to the history of nightlife in the United States. Fabulous navigates between the high and the low, in the kind of contradictory synthesis that is fabulousness’s hallmark. It’s that thing that anyone can recognize, but that hardly anyone can pull off.

moore describes Fabulous as inspired by Thorstein Veblen’s Theory of the Leisure Class. Both books study extravagant and fashionable people, who put their time and money toward leisure and pleasure. Whereas Veblen’s account of capitalist waste is damning, moore finds something redemptive in his fabulous subjects. He writes in the book’s opening pages: “But the story of conspicuousness I’m telling here is much more brown, much more queer, and a lot more fun — but the pursuit of fun and pleasure are political gestures too.” Notice how moore repeatedly begins clauses with the contrasting conjunction “but,” signaling his repeated recuperation, first of brown, queer lives, then the political validation of their pleasure from the wholly white history that Veblen provides. moore’s project searches for the places where brown and queer folk might do more than just survive but actually flourish and enjoy themselves. These places include nightclubs, balls, and between the beats of a synth bass, but they are not limited to them. moore’s own practice of writing Fabulous extends his project, creating another, more intangible and theoretical, place for these brown, queer, and fabulous lives.

“Fabulous” describes not just moore’s object of study but his stylistic approach to the book as well. He lets his understanding of fabulousness impact how Fabulous progresses. At one point, moore describes a certain method of fabulousness that he describes as “creative strangeness”:

Creative strangeness is a fashion editorial spread showing a guy standing in a trash can wearing a vintage wedding dress, shaved eyebrows, and rings on every finger, holding a fabulous snake, totally covered in oil, and posing for the gods. It doesn’t make any sense — it’s bizarre, interesting, forcing us to look over and over — but that’s why it works. It’s an exaggerated storyboard of the self, style as theater.

Not just in the “creative strangeness” but in the act of looking “over and over” does moore find a sort of fabulousness. There’s something pleasantly repetitive about Fabulous, like a house beat or another turn on the catwalk. Throughout the book, that titular word repeats over and over, as thoughts, sensations, and feelings glom onto words, ideas, and quotations. For example, in the book’s first chapter, moore draws on ideas from multimedia artist Alok Vaid-Menon, when they ask, “What feminine part of yourself did you have to kill to survive in this world?” This quotation resurfaces later, cited from a tweet by Vaid-Menon. In the same way, moore repeatedly returns to Vaid-Menon’s exclamation, “I don’t want to be boring!” In Fabulous, repetition — “looking over and over” — is not boring. Instead, it serves as the very vehicle that conveys fabulousness to the reader.

At times, it seems that moore asks too much of fabulousness. His conversations function differently when moore turns to his critical and theoretical interlocutors. When moore discusses Ngai’s analysis of “aesthetic categories,” gleaned from careful readings of philosophers like Theodor Adorno, or what Brian Massumi describes as the “just-beginning-to-stir” in Semblance and Event, developed from an amorphous Deleuzian metaphysics, this turn to academic theory tends to restrict moore’s movements, like thrifted shoes that are a size too small. This turn to “high” theory gestures toward the tradition of aesthetic theory valued in academia, but it doesn’t quite strut down a runway. When moore’s use of “theory” fits, it’s most often with that of Jack Halberstam’s “low theory,” developed from Stuart Hall’s cultural studies in The Queer Art of Failure.

Sometimes this application of theory exposes inconsistencies in moore’s work. When moore draws from Ngai’s aesthetic theory, he claims, “writing about aesthetic categories is not just about ‘exotic philosophical abstractions,’ as fun as it can be to think big and play with abstract concepts, but instead a part of the fabric of the everyday. Thinking about aesthetics allows us to share and confirm our experience with others.” In this understanding, moore chooses to understand fabulousness like other aesthetic categories that are embedded in “the fabric of the everyday,” such as in Ngai’s focus on the “cute” or the “interesting,” but in other places, moore wants to claim that fabulousness escapes, disrupts, and maybe even transcends the ordinariness of other aesthetic categories. A key facet of his hope in fabulousness’s potential for queer futurity lies in this very disruption. Fabulousness expresses an ordinariness not from our dismal present but rather from a potential, utopian future.

This approach seems similarly ill-fitting when moore puts his work on fabulousness in conversation with queer theorist and performance scholar José Esteban Muñoz’s thoughts on queer futurity from the book Cruising Utopia. For Muñoz, “it is productive to think about utopia as flux, a temporal disorganization, as a moment when the here and the now is transcended by a then and a there that could be and indeed should be.” moore takes inspiration from Muñoz and responds to critics who think that “the problem […] with notions of utopia is that thinking about an elsewhere does not put food on the table, so to speak, nor does it do much to topple the systems that oppress us every day […] Too much theory, not enough action.” moore claims that fabulousness is one way to embody a no longer merely theoretical future — “fabulousness as queer utopia is about living in the present but carrying an alternative possibility, a certain future, and yanking it into the here and now” — but he fails to fully back this approach. Throughout the book, moore concedes to Muñoz’s critics. He dwells on the fact that fabulousness does not put food on the table nor does it pay the rent, among any of the other things that we need to survive. While these concerns are very real and cannot be ignored by most people, especially queers of color, there’s some use in saving fabulousness from these concerns. At places in the book, moore seems ready to salvage it from the concerns of capitalism, but in others, he frets too much over its ultimate powerlessness.

What moore doesn’t note is that Muñoz’s critics actually ignore an important facet of his understanding of queer utopian performance — namely his focus on that performance as an ornamental aesthetic. A couple pages after the passage from which moore draws, Muñoz discusses Ernst Bloch’s idea of the ornamental as an aesthetic that avoids capitalist cooptation: “The ornamental . . . has an indeterminate use value that challenges the protocols of capitalism, and in it one can view Bloch’s anticipatory illumination of art.” It’s not just that queer utopian performance provides an anticipatory illumination of the then and there that could, should, (and will) be in spite of the demands of our current world, but it actually establishes this futurity because it avoids these demands, intentionally failing to meet the impossible expectations of an unjust world.

It might be nice to imagine that fabulousness might somehow do both — be frivolous, irrelevant, and fun and do the important political work that is our responsibility to create a better future — but I think it would actually be more freeing to say that fabulous doesn’t have to have use value: that it actually saves us by avoiding it. Asking any more of fabulousness ironically limits its potential. Near the end of Fabulous, moore returns to Muñoz’s discussion of utopia, this time in the context of vogue balls:

Performance is the space where queer utopias are enacted, and the stage is the actual platform where utopian visions can be realized . . . On the catwalk—a space that could be at the vogue ball or anywhere we go, even just a casual pump down the sidewalk — we get to shout, for all to hear, that we may be brown, and we may be queer. But we are here, we are creative, and we are fabulous.

It seems wrong to ask anything more.

Adam Fales grew up in Kansas and recently graduated from Fordham University. He is a manager at Book Culture in New York City and has also written for the American Antiquarian Society’s Past is Present, the Journal of the History of Ideas’s blog, and the Los Angeles Review of Books. You can find him on Twitter @damfales.