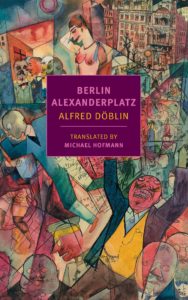 What is Alexanderplatz in Berlin? It is the site where for the last two years the most violent transformations have been taking place, where excavators and jackhammers have been continuously at work, where the ground trembles under the impact of their blows and under the columns of omnibuses and subway trains; where the innards of the metropolis and the backyards around Georgenkirchplatz have been laid bare to a greater depth than anywhere else; and where districts built in the 1890s have managed to survive more peacefully than elsewhere in untouched labyrinths around Marsiliusstrasse (where the secretaries of the Immigration Police are crammed into a tenement block) and around Kaiserstrasse (where the whores make their rounds in the evening). It is no industrial district; commerce above all — petty bourgeoisie. And then, there is its sociological negative, the crooks who obtain their reinforcements from the unemployed. One of these is Biberkopf.

–Walter Benjamin, “The Crisis of the Novel”

“The crowds, the crowds . . . All that stuff . . . Hundreds of shiny windows, let them flash away at you, they’re nothing to be afraid of, it’s just that they’ve been cleaned, you can always smash them if you want.” So thinks Franz Biberkopf, once again an (un)free man, having just been released from a four year bid within the red walls of Tegel Penitentiary and taken the 41 tram into the city, he struggles to instantly transition to life on the outside, walls that aren’t red, movement unrestricted, time unordered: “His real punishment was just beginning.”

Biberkopf’s interior monologue attempts to process a cityscape in chaos, a flurry of advertisements and commodities, a spectacle, a world behind glass where Biberkopf no longer behind bars cannot find a place for stillness amidst a flow of world too hurried to account for him. Franz is lost. Without the prisoner’s number and the daily regimens of stricture that are its corollary accompaniment, he panics, afraid he has simply been forgotten, that authority (herein always some combination between God and State) has overlooked this little criminal. He has slipped everyone’s mind. And even worse still, in a city in which “the facades were never ending,” he fears the slanted roofs are slipping too, an oblique world desperately and perilously unbalanced, imminently poised for calamity.

If worst comes to worst, however, the plucky protagonist still has a plan. He still thinks that he can smash those windows. He hopes he has a hand to play even if he’s been shorted a few cards at the time of their dealing (when was that?). The ex-prisoner fears the elusive power in those freshly cleaned glass panes, because in catching a glimpse of his own reflection, he can only attempt to negate it through a rash act of violence. His modus operandi, Biberkopf continually opts to lash out rather than turn his gaze inward, and incapable of self-reflection (the kind of thing that would be required to position himself in relation to), this novel will simply show his fall and rebirth, substituting the endless self-doubt and handwringing of realism’s interiority for the endless, surging oscillations of a vastly (im/inter)personal Weltgeist where the city and in its inhabitants meld together in an impossibly bitter psychic soup.

Originally published in 1929, translated into English in 1931 by Eugene Jolas (and contemporaneously panned), and translated into English once more here by Michael Hofmann, Alfred Döblin’s Berlin Alexanderplatz sketches the bleakness of Weimar Germany in high contrast, attempting to take in Berlin not as panorama but bricolage. Published in Die Gesellschaft in 1930, Walter Benjamin’s review of Berlin Alexanderplatz, “The Crisis of the Novel,” identifies the formal ground of Döblin’s modernism as an outgrowth of “the autocracy of the authentic,” an attempt to inject the everyday into the text in the hopes of depicting without hypostatizing:

The stylistic principle governing this book is that of montage. Petty-bourgeois printed matter, scandalmongering, stories of accidents, the sensational indictments of 1928, folk songs, and advertisements rain down in this text. The montage explodes the framework of the novel, bursts its limits both stylistically and structurally, and clears the way for new, epic possibilities. Formally, above all.

In Benjamin’s reading, Döblin has finally brought to the novel a form that “corresponds” to the generic forms of the epic. He does, however, note that these formal aspects do not make the narrative itself flout convention, as he traces its lineage to Dickens, “in whose works bourgeois and criminals fit each other like a glove because their interests (however opposed to each other they may be) inhabit one and the same world.”

Döblin’s Biberkopf certainly aligns himself with bourgeois interests. He was a pimp who ruthlessly exploited the woman he eventually beats to death with a whisk (the manslaughter crime behind his entry into Tegel); he flirts with trade unionism but soon turns to selling fascist newspapers, fancying the clichéd sloganeering on behalf of order; he ingratiates himself with a counterrevolutionary Stirnerite who shows up at anarchist and communist rallies only to heckle the workers; and he once again turns to the sex trade before his former gang member murders the woman responsible for Biberkopf’s sole income. Franz Biberkopf is a parasite who does not recognize himself as such, something even more unsettling than Gregor Samsa awakening as Ungeziefer.

The German communist literary press was far less generous to Döblin’s novel than Benjamin. Writing in the communist literary magazine Linkskurve, Klaus Neukrantz proclaimed Berlin Alexanderplatz to be a “reactionary and counterrevolutionary attack on the thesis of organized class struggle.” In this edition’s Afterword, translator Michael Hofmann notes that “negative reactions, like the fury and disdain of Communist reviewers, who either disliked the self-professed petite-bourgeois author Döblin, or couldn’t see a proper proletarian role model in his criminal, and worse, apolitical hero,” ultimately helped the book’s popularity upon its initial run. While the critique which sees Biberkopf as an unfit protagonist because he is not a noble and upright worker has little if anything compelling about it, Neukrantz’s position possesses some possibility as Döblin’s novel is not “reactionary and counterrevolutionary” because it sidelines the proletariat to tertiary characterizations but rather because it fails to examine the lumpenproletariat as anything more material than fodder for a setting in the underworld, a kind of Brechtian set design, emptied out. When Benjamin writes that “even the first of the month seems to have lost its terrors in the area around Alexanderplatz,” he does so in order to position Berlin Alexanderplatz as distinct from the “social novel”; however, the only reason rent has become an afterthought and raggedness of lumpenness can be seen as inextricably entwined with bourgeois interest stems from the literary treatment of this periphery as largely empty of any ability to see itself as a class, a romanticizing portrait of the condition of what Michael Denning calls “wageless life.” While this novel finds itself endlessly compared to the contemporaneous works of Dos Passos, Manhattan Transfer and The U.S.A. Trilogy which all see entry into the lumpenproletariat as a moment for radicalization, Berlin Alexanderplatz considers this entry merely a linkage in the natural chain of progression for those who will soon be Nazis.

Berlin Alexanderplatz has none of that Blochian anticipation of utopia, but a dread of the future, a work wherein that which is nascent only moves in a single, inevitable line, to onomatopoeic beats of the novel’s closing words, “widdeboom, widdeboom,” marching, marching into the horror of order, the horror of Franz’s rebirth as petty-bourgeois: “Biberkopf is a little worker. We know what we know, we had to pay dearly enough for it.”

The great successes of the novel really come from its embrace of formal experimentation, when that technique of montage cuts the reader away from the narrative and characters it has placed at its center and shows us the briefest moments of a helplessly entangled world. These little scenes showcase Döblin’s ability to elucidate the fine details of individual desperation meeting with cosmic cruelty. In telling the stories of four people who board the Number 4 tram at Lothringer Strasse, Döblin crafts the life story of a young boy with a stunningly melancholic brevity:

Unremarkable, except that Döblin compels us to dwell on how the unremarkable beckons for at least a few words. Similarly, we see the last diary entry of an unnamed, unemployed, twenty six year old woman:

14 August. For the past week I’ve been doing very badly again. I don’t know what will become of me if it stays like this. I think if I was alone in the world I would turn on the gas tap without another thought, but I can’t do that to my mother. I really hope I get a grave illness which will carry me off. I have written everything down the way I really feel it.

This brief detour remains all that we see of this woman, the only insight into not only her depressive state but also her writing, a glimpse of the way she really feels it, a few entries from which we must deduce the trajectory of a life to be lived (or not). But the most stunning of these flashpoints arises from the description of a slaughterhouse, Döblin reminding us in the section title that “For as with animals, so it is with man; the one must die, the other likewise.” Beginning in the slaughterhouse and moving through it with great descriptive detail, the second-person appears to alert us that we are the lambs being led to the slaughter. This industrial detachment, this orderliness, possesses a frightening nonchalance towards its utter brutality:

A pale young man with fair hair plastered to his head, a cigar in his mouth. Look at him, he will be the last human with whom you will have dealings! Don’t think badly of him, he is only doing his job. He has official business with you. He is wearing rubber boots, trousers, shirt and braces. That’s his official garb. He takes the cigar out of his mouth, lays it aside on a bracket in the wall, picks up a long-handled axe that was lying in the corner. This is the sign of his official rank, his power over you, like the detective’s badge. He will produce his for you any moment now.

At the end of this scene, Döblin simply remarks upon the day’s production numbers (“1,399 cattle, 2,700 calves, 4,654 sheep, 18,864 pigs”) that come to mark something immeasurably distant from those preceding moments, those few pages when one of these numbers was hailed as “you.” The young man doing the killing, the one with the badge, the one in uniform, the one sanctioned by a higher authority, the one “only doing his job,” the one on “official business,” stands out as an especially horrible figure in a novel densely populated with them. He is the harbinger of futurity in Berlin Alexanderplatz. We know what comes next. Widdeboom, widdeboom.