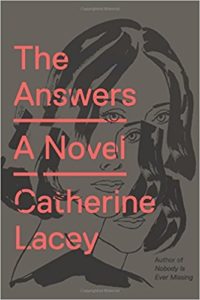 Catherine Lacey’s second novel The Answers is a contemporary tale about scientists’ and science’s meddling with our notion of self and our personal relationships. Contrary to the title, and contrary to scientific research looking to solve human mysteries, there are no answers to be found here. Instead, The Answers underscores the impossibility of arriving at any explanation of what a subjectivity is made of — at least for now.

Most poignantly, the novel explores the complexities of female subjectivity by drawing its readers into the protagonist’s intricate psyche. She defies stereotypical renderings of femininity — she is not emotional but contained, not frivolous but thoughtful and smart. Over the course of the novel, the 33-year-old narrator is trying to figure herself out. She navigates her surroundings uncertainly, as if she had just arrived to planet Earth, or at least to adulthood in a capitalist world she was not raised to thrive in. Her childhood, she is adamant in saying, wasn´t her life. And the time she lived with her Aunt “hadn´t really been a life, more like rehabilitation. And college wasn´t a life at all, just a gestational period, four years of warning and training for this life that was coming, that future thing.” Her life, she says, “began on an airplane, the moment we left ground.”

She is anything but a domestic creature — another stereotypical idea of womanhood. When the novel begins she has already left the tormented home of her upbringing behind. She has abandoned the austere religion imposed by her father, which kept her in solitary confinement. She has changed her name to Mary — a name, says her aunt, that will allow her “to be anyone you want”— and has lead, wholeheartedly, evasively, the life of a fugitive: always flying away from a regular life. But soon she is caught again: indebted, unable to pay the costs of that freedom, and is now suffering from some strange ailment that has turned her body, her “only possession,” into a new prison.

Pain — one that seems to “stretch me from the inside” — leads her to all sorts of doctors who cannot figure out what her problem is. And they continue to send her bills she cannot pay — this is, after all, the US health system. She is again trapped and desperate. Her only friend suggests an alternative-but-expensive therapy she distrusts — the language of energy and vibes resonates like the language of a new religion, and its promise of liberation comes at a very high cost in US dollars. But nothing else has worked and chronic pain is unbearable, unlivable.

Here´s where the novel veers into its strangest: Mary, who has abandoned parents and aunt, who has lost her loving boyfriend, who is unable to connect intimately with her therapist, and whose only (eccentric) friend has disappeared, takes the secretive “income-generating experience” that is offered to her. She becomes a participant in a well-paid neurobiological research project destined to decipher the inner working of feeling.

Joining a group of “girlfriends” who play motherly, intellectual, angry, and other roles, she, the most taciturn among them, is commissioned to play the part of the Emotional Girlfriend, the one who must listen quietly, and be there for a well-known actor who is funding the project. But the man, Kurt Sky, is a narcissist who only cares about himself and only sees his emotional needs, his wants, and is thus easily fooled by the team of researchers, who not only study but manipulate feelings way beyond what is ethical.

The novel steps into no sci-fi scenario, as has been suggested elsewhere. It is in fact tuned up with current research in behavioral neuroscience, which took center-stage with the publication of the human genome a decade ago and is no longer considered to be a “soft” science. And while human subjects had been largely absent in the study of the neurobiological basis of behavior until then, very recently, as neuroscientist Carmen Sandi explains, “the question ‘why do we need mice if nowadays we can virtually do everything in humans?’ is becoming not so infrequent.”

To be sure, the answer to this question, even among scientists, is not at all simple. There is, for example, the concern that understanding could easily lead to controlling. Catherine Lacey´s novel takes up this concern. She reminds her reader that scientists are human beings too. Humans whose enterprise can be (and is too often) energized by unrestrained ambitions they claim to pursue in the name of Science, but nevertheless constrained by social constructions of gender.

Lacey thus situates this contemporary anxiety — scientists envisioning the self in a purely objective manner, thinking about feeling as nothing more than measurable neurochemical reactions — and examining its consequences in the realm of the vulnerable lives of women who need the cash and are willing to put their bodies in the hands of “experts,” to be turned (once again, one might add) into the unknowing dolls of scientific study. The Answers is a novel of great lucidity and actuality, an unsettling book that offers no answers but still provides provocative insight into some of the most frightening ethical questions of our times.

Lina Meruane is an award-winning Chilean writer and scholar, teaching at New York University. She has authored several non-fiction books and four novels. Sangre en el ojo, her most recent, received the prestigious Sor Juana Inés de la Cruz Novel Prize in Mexico and was translated into English as Seeing Red (Deep Vellum) among other languages.