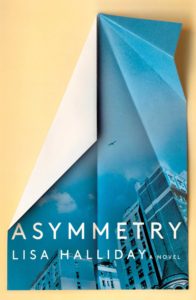 At the very middle of Lisa Halliday’s deftly textured debut novel, Asymmetry — at the hinge between its two faces — one main character says to another, “We’re going to be fine.” He’s referring to their romantic relationship. But Asymmetry’s achievement is to ask, without shouting, what overtones his phrase might set ringing, and on what privilege his assurance might rest. If Ezra and Alice are never, ever getting back together (an open question), it’s not just because Alice no longer wants Ezra to be the “you” to her “me.” It’s mostly because she is beginning to care about bigger, more political meanings of “we” (and “fine”). Her focus on language, here and elsewhere, is not incidental: she is beginning to care about these things as a writer.

Ezra is Ezra Blazer, an aging, Jewish eminence of American fiction, libidinous and witty, with multiple Pulitzers to his name but no Nobel, at least not yet. Alice is Mary-Alice Dodge, a young editorial assistant and aspiring writer, at turns slapstick-impish and deadly earnest. She first meets Ezra on a sidewalk in the neighborhood where they both live, Manhattan’s Upper West Side, and works to maintain a sense of agency and perspective as he treats her to a Wonderland of sugar-daddy sentimental education, equal parts designer fur coats and literary greatest hits of twentieth-century Europe, from the moral ministrations of Hannah Arendt to the scatological musings of Jean Genet and James Joyce.

Many readers will recognize in Ezra the telltale figure of Philip Roth, and some might learn that Halliday worked at the Wylie Agency, which has long represented Roth, in the George W. Bush-era years in which Alice’s section of the novel takes place. But if Asymmetry is a roman à clef tempting prurient or insider-baseball curiosity, the key that unlocks its biographical origins is hardly the most interesting one Halliday puts at the reader’s disposal. The baseball most prominently on display, quaintly, is the kind played by the Yankees and Red Sox, which Alice loves, and on the whole the book is much more than a tell-all memoir about an affair with Philip Roth, not least because it’s not a memoir, it doesn’t tell all, and Ezra and Alice’s relationship is not exactly what “affair” suggests, since no one is cheating.

There is, what’s more, the other side of the hinge. After 120 pages of Alice, the reader is abruptly greeted by Amar Ala Jaafari, an economist the same age as Alice, born high above her native Massachusetts — aboard the plane that brought his Iraqi family from Baghdad to New York, leaving him with “two passports, two nationalities, no native soil.” At the end of 2008, he travels from the US to Iraq in search of his older brother, Sami, who, having resettled in relatively peaceful Kurdistan, has mysteriously disappeared. On his way, he is detained for vague reasons in a labyrinthine border-control facility within Heathrow Airport.

Elaborating on this doubly awful bind in grandiloquent paragraphs, punctuated intermittently by the terse Heathrow interrogations, Amar unfolds for the reader much of his life story. The major turns, in his dextrous, non-linear account, are the breakup of his intense relationship with his white college girlfriend, Maddie; his subsequent career change from medicine to economics, better to suit his anxious, risk-averse disposition; and Sami’s repatriation to Iraq amid ever-increasing turmoil, including personal danger for their politically active Baghdadi Shiite family.

So: one of these novellas is not like the other. The asymmetry, of course, is very much the point, and the contrast is inherently political. Together, the two parts ask, What ‘we’ can hold us? Also, How wide is the lens when you, reader, say ‘we’? Who and what do you leave outside the frame? Who and what, within the frame, do you nonetheless blur or elide? What power, in the framing and the blurring, do you wield? These questions, which find a natural source in the Bush era, echo loudly in our present, though not clearly — if anything, more cacophonously than ever. To Halliday’s credit, she risks adding to the cacophony, speaking past the kind of contemporary identity-politics dogma that prizes the “authentic,” singular “I.” Alice’s section, “Folly,” performs a feminist inversion of misogynist Roth novels such as The Anatomy Lesson, a flip not unlike the one Kamel Daoud makes in The Meursault Investigation (Other Press, 2015), which retells Camus’s The Stranger from the point of view of the character Camus indifferently calls “The Arab.” But with Amar’s section, “Madness,” Halliday discombobulates the whole reclamation paradigm by standing on ground more naturally reclaimed by the likes of Daoud.

These extra layers of provocative questioning would suggest that Asymmetry only really digs in once it leaves Alice’s “folly” behind. But key to the novel’s political provocations, and its literary coherence, is the fact that it never leaves Alice behind. In the book’s very first lines, she expresses contempt for a novel “made up almost exclusively of long paragraphs” with “no quotation marks whatsoever.” Later, she starts “to consider really rather seriously whether a former choirgirl from Massachusetts might be capable of conjuring the consciousness of a Muslim man,” and, at jury duty, she wonders about the absence of a man named Amar Jamali. Tidbits from “Folly” resurface in “Madness”: the music of Leoš Janáček and Chet Baker, quotes from Primo Levi and Stephen Crane, the difficulty of even a not-so-traumatic abortion. We are invited to ask, Did Alice go on to write a short novel that renders the consciousness of a Muslim man in long paragraphs, with no quotation marks whatsoever?

By this smooth metafictional sleight of hand, when Amar remarks, “We all disappear down the rabbit hole now and again,” and, “Sometimes you just want someone else to take over for a while,” Halliday lets us hear Alice thinking and saying and writing his words. His memoir, which abundantly questions whether memoir is anything but another kind of fiction, becomes not only Alice’s novel but also her daring disquisition on the ethics of fiction, be it culturally appropriative or not. And if Amar’s story feels just a bit off — too written and perhaps too well-written, his midair birth too melodramatic — we could understand that to be Alice’s novelistic failing, not Halliday’s, or we could understand it to be an intentional jab at the arbitrariness of what we accept as fiction in a world of outrageous facts and “facts.” Halliday has a keen ear for the chimes of coincidence, and her book surely asks its reader, equally, to consider whether Amar might be a human being in Alice’s universe, rather than a figment of her imagination and research.

In either case, Asymmetry is a remarkably well-modulated novel, drunkenly sober, whimsically somber. It exults in quiet ironies, from Ezra getting his Nobel after all (take that, Phil) to Amar, not Alice, being the one to deliver a first-person autobiography. “Folly” traces a brisk, shapely arc, skipping across a couple years but never losing its vivid immediacy (nor its buoyant, intelligently silly sense of humor, which, yes, slyly recalls Roth). What Halliday sustains more broadly is an exacting control; only very occasionally, mostly in Amar’s section, does this threaten to snuff the life of her language. She has an especially adept feel for pace, and her handling of interpersonal tragicomedy, whether between lovers or between interrogator and detainee, illustrates that timing and tone lie at the core of literary, theatrical, and musical artistry because they lie at the core of social life, not to mention societal citizenship. It’s a relief that the comic tone of “Folly,” which is not above making a recurring gag out of Alice’s dotty neighbor knocking in the rhythm of “Shave and a haircut, two bits,” doesn’t entirely fade from “Madness.” Both sections bring to mind Clive James’s maxim, “A sense of humor is just common sense, dancing.”

James’s line might suggest a celebration of cleverness or one-upmanship. But it has more to do with the bond between wit and wisdom, and with the fact that neither one is worth much without generous sensitivity to other people — you can’t have “common” sense without looking past “I” to “we.” Halliday is onto this, and, if her metafictional deflections and tight rein on the prose betray a certain callow, defensive anxiety, she still generally avoids the kind of cleverness that pats itself on the back. Only in the shorter third section, a transcript of a radio interview with Ezra, does Asymmetry lose its nerve in this regard. Yielding to his indulgent sense of his own wit and wisdom, the book telegraphs through him several tidy takeaways, such as “Our memories are no more reliable than our imaginations” and “Sometimes you just have to let your characters get on with it.” It seems poor service to the other characters not to let them do just that, without giving the solipsistic, famous old white man the last wink and last word. But perhaps even this is a subversive act of generosity. The unlikely chorus to which Halliday has given voice does seem to keep humming underneath, knowing his time will soon be up.

It hardly needs saying that Halliday’s dissonant hum resonates right now, that we (who?) are presently, constantly asking troubling questions about the personal and political asymmetry — and continuity — of disparate lives. Is it politically acceptable for a white, highly educated, upper-middle-class writer to write fiction about an Arab Muslim detainee? Is it politically acceptable — or even aesthetically interesting — for that same privileged writer to write fiction derived from her own personal life, unless she builds in an exhaustively conscientious substructure of self-interrogation?

Halliday manages to honor such pressing questions conscientiously, while also asserting that the identity markers needn’t be all-defining, the substructure needn’t be obtrusive, and the interrogation needn’t be exhausting — or, if exhausting for the writer, at least not for the reader. She has wagered that her debut is challenging enough to get away with being delightful, and that there is value, political as well as literary, not only in the challenge but also in the delight. We should ask whether a writer of lesser privilege or security (immigrant, queer, of color?) could possibly be rewarded, today or tomorrow, by Simon & Schuster or by a broad US readership, for making the same kinds of gambles. But we (who?) should also remember that Halliday is there with us asking the question. Shave and a haircut, two bits: her bets have paid off.

Alec Joyner is a PhD student in English and Comparative Literature at Columbia University.