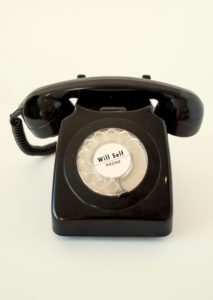 In a 2014 Guardian essay, the British novelist Will Self gave persuasive technological and theoretical reasons for the death of the literary novel. Yes, he knew its morbidity had been remarked many times before, but “this time it’s for real.”

In an interview that same year, Self discussed the consequences for himself:

I haven’t got the possibility of canonical posterity because the canon’s not going to exist in that form anymore. So personally, emotionally, the least good parts of me are pissed. But the better parts of me are excited and amused and think it’s fun to write these full-stop-type books, saying, “Yeah, this is fucking coming to an end; let’s go out with a grand, bravura display of what this form can do! Let’s squeeze the last drop from it and try and do something exciting!”

By “full-stop-type books,” Self probably didn’t mean books for readers of Full Stop, though you are more likely to appreciate his “grand, bravura display” of high literacy than the readers of most reviews. In the interview he was referring to Umbrella (2012) and Shark (2014), the first two lengthy and risky novels of a trilogy now completed with Phone. All three combine modernist stream of consciousness and postmodernist stream of data, internal psychology and external technology, sentence fragments and cultural syntheses. Self has been teaching a university course in Ulysses. Think of his novels as a hybrid of Joyce and the Gaddis of JR, the Pynchon of Gravity’s Rainbow. “Everything is connected” says that last novel, but everything in the trilogy is also chaotic in style and “plot.” There is method to Self’s elliptical madness. His ellipses and indirections reflect different forms of mental derangement or cognitive impairment. Protagonist Zack Busner, a psychiatrist, deals with catatonia in Umbrella, experiments with schizophrenia and hallucinogens in Shark, and in Phone reflects on his schizoid son Mark and his autistic grandson Ben. Self calls himself a “psychogeographer,” and the novels connect the illnesses of their characters to historical, social, and technological material culture.

British reviewers, who may have no multi-volume Vollmann or Danielewski, say Self’s trilogy is one of the most ambitious literary undertakings of this century. Certainly at 617 pages, Phone is hefty, and longer than Self’s earlier novels. But it is smaller in its purview than its predecessors. Because Umbrella is pervasively psychogeographical, I found it more profound than the more psychopersonal Shark. Even though Phone is primarily set in the early years of this century, and didn’t require the historical research of the previous books, Self has unfortunately continued to narrow his focus on the personal.

Phone focuses primarily on two basic personal narratives. The first is that of Dr. Busner, now 78, somewhat demented and fleeing a family in London that wants to put him in a “care home.” Busner has a staff and begging bowl, and thinks of himself as a “Sannyasi,” a Hindu elder who has divested himself of worldly possessions. Waking up after a drunken meltdown with a prostitute in a Manchester hotel, Busner goes to the dining room divested of his pants. His grandson has given him a smart phone with any information Busner might forget, but in trouble with the hotel staff he neglects to answer Ben’s possibly helpful calls. Although it’s kind of sad to see an occasionally heroic character in earlier novels become a conventionally comic senior fumbling with his cell phone, later in the novel Self does give Busner some insightful moments to go with the empathy that his family members claim is bogus. The retired psychiatrist listens to his daughter-in-law Camilla’s complaints and fantasies on the phone, buys computer equipment for Ben, and at the very end of the novel may well be heading to a Buddhist retreat with a couple of psychotic adoptees — if this part is not imagined by the good doctor.

In Umbrella and Shark, Busner was involved with several members of the De’Ath family, who were minor characters.  In Phone, Jonathan De’Ath becomes more important than Busner and takes over the novel. A closeted James Bond type, the middle-aged Jonathan falls in love with a younger tank commander, Gawain Thomas, and conducts a secret affair with him for a decade. Possessed of a savant’s memory, Jonathan is like a human computer (and the autistic Ben). Eventually, Jonathan has to go to Iraq to “save” his lover, who has allowed detainees to be tortured at Camp Bread Basket (a real scandal like Abu Ghraib). Memories of World War I saturated Umbrella, and survivors of World War II made appearances in Shark, but the many pages of Phone about a spy in Iraq seem disproportionate, the author’s exploiting a popular form (Le Carre is mentioned). Self might say, “The mistreatment of prisoners results from the reign of ‘information,’ of heartless autism in government.” I can see this, and yet the Iraq sections feel like Self’s attempt to “save” his literary novel with shocking contemporary relevance that he makes surreal with passages where objects talk. And, to boot, Self makes his calculating spy an unlikely sentimentalist who breaks relations with his lover because one of the detainees, who died, was a long-time friend of Jonathan De’Ath’s.

At the end of Phone, Ben emerges in his own voice as a hacker who says he has only pretended to be autistic to cover his obsessive gathering of information, some of it about Jonathan. Jonathan becomes Ben’s inferior double, for Jonathan depends on “humint,” old-fashioned human intelligence, while Ben is a master decoder of the digital realm. In these last pages, Self seems to imply that Ben is the future, the man of the phone. His face-to-face relations are few, and he manipulates others at a distance through text messages. Self implies the phone is a precursor of computers and suggests addiction to the iPhone may be rearranging cognition and modifying human relations. But the object lacks the symbolic power Self wants to give it with his title. The novel is much more about secrets — Busner’s life increasingly a secret to himself, Jonathan’s secret affair and secret service — than about the influence of the phone which is, after all, a subject of weekly journalistic analysis. More interesting than passages about the phone are the geography of Iraq and the internal terrain of Busner’s crumbling mind.

To Self, the phone represents disembodiment, so Phone programmatically reminds readers of its characters’ bodies. Busner repeats again and again the notion that his toenails will continue to grow after his death. The sexual connections between Jonathan and Gawain are explicitly and continually described. Self is very specific about Iraqi detainees’ mangled bodies. But the primary symbol of embodiment is excrement. “Surely,” Gawain thinks, “you were never more . . . more . . . what was the word . . . ? Embodied — that was it: embodied, than when you were doing a shit.” Busner spreads his shit all over his hotel room. Anal intercourse has more than a whiff of shit. Detainees sit or lie in their own waste. Various settings are described in excremental terms. Bloom has his outhouse in Ulysses, and Slothrop plunges into a toilet in Gravity’s Rainbow, but Phone is obsessively cloacal, Self like a Swiftian Yahoo slinging shit onto the .

Some reviewers in Great Britain have criticized Self’s trilogy for being too diffuse, too difficult. I found Phone not diffuse enough: too narrowed on two basic stories. Not too difficult but too detailed and repetitive in the telling of these stories. As a character says, “Reflect on how boring a film, a fuck or a conversation can be if it goes on . . . too bloody long.” I love what Self calls his “wordsplurge,” the constantly interrupted stacatto of vernacular fragments, literary allusions, and technospeak. But Self often repeats in italics phrases that appear in regular font, a tic he identifies as palilalia. If repetition is a symptom of autism, perhaps Phone was “written” by Ben and is an autistic masterpiece.

In 1989, I published a book called The Art of Excess that praised long, diffuse, and difficult books by Pynchon, Gaddis, McElroy, Coover and others. Like their excessive novels, Phone is radically deformed and influenced by contemporary science. Although not quite as old as Dr. Busner, I have reached with Phone a limit case of the Art of Excess. Self has said that as a literary novelist at the end of a tradition he wants to go out with a bang, but the intentional excesses of Phone don’t blast this reader into some new paradigm as those earlier American novels did, don’t conduct me into a profound psychogeographical mapping of contemporary life. Maybe it’s because I don’t own a smart phone.  I doubt younger readers who do will have the patience for Self’s 617 pages. But I do recommend Umbrella and Shark, and if you find their excesses artful you may read Phone with more enthusiasm than I was able to summon.

The History of America in My Lifetime – Brooks Sterritt