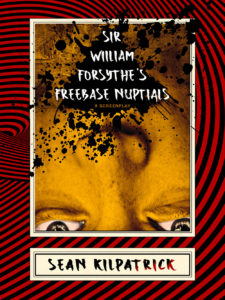 Sir William Forsythe’s Freebase Nuptials is the sixth short book Sean Kilpatrick has published in as many years, three or four smaller chapbooks notwithstanding, capping off a span of publications dating back roughly to 2003. Far more bent than your typically smart, kooky, quirky, safe, and marketable fandango-with-nostalgia, yet not above catering to that capital, this is a threnodial and crackheaded take on, or against, Ready Player One (already in screenplay format) aiming itself at, or around, via an irony that will perhaps disappoint, all the same, in one fell swoop, fans of academic abstraction and enthusiasts of the thick ubermenschen who populated Z grade 80s action flicks. Stuck festering between brows high and low, Kilpatrick’s latest instantaneously ignored struggle with cultural iconography and line quality inflicts (potential) readers with his wang mural on a bathroom stall. Another so-called author falls victim to the technological capabilities of their Word program, as Gary Lutz implied about his neurotically (even more than he is, if possible) fastidious imitators. Between the Lishian consecution saluting everyone from Stein to Beckett to Will Eno inside the stretched rectum of what a sentence should or shouldn’t do, and aside from the crime of adding to that style an intertextual bezoar of fluffed avant-pop maximalism (the wannabe Shakespeare of guitar solos), juxtaposed with a general fetishism of the personal (boy, have poet Kilpatrick and his Byronic belly had some relationship issues, as I’m sure he’d openly and insufferably elaborate after one drink or none), the plot at hand, as a sort of simple, if parodic, Airplane absurdism folded into a postmodern diaper of self-imposed bleakness, holds a snippet of entertainment value, and a collection of snippets is what the book is. It might almost be worth the afternoon Kilpatrick demands of us, if the clock’s ticking never once felt like a porcupine rubbing its quota into your day and if you have the luxury to parse your pet’s feces for the plastic flower they might have swallowed. Again, the man bemoans his lack of love from others as if the expectancy of his own worth has ever earned him anything longer than an uncomfortable hug. The characters herein suffer that reflection atomically.

If you can’t spare the overpriced fee, or can’t con the writer into thinking you will review his work with a positive affectation (not that that’s possible for anyone with taste), here’s what you’re (not) missing: a demonic version of William Forsythe’s character Richie Madano, from the surprisingly effective (and occasionally accidentally marvelous, with its sublime and abject summary execution of an innocent woman mid-traffic, violence portrayed with horrendous moral weight for once in one of these dumb films, setting off a formidable rampage showing more than a little contemporary relevance in its supreme nihilism) Steven Seagal vehicle Out for Justice (made before Seagal was a joke), has been resurrected from his (spoiler!) ill fate at the end of those doings, into some 90s dystopia of retro archetypes gone wild. Demented appropriations of several dead or soon-dead celebrities abound, howling to us from a time when their wild privileges went unchecked across the arts in a hedonistic mania of gratuitous glee, before social media neutered them into a cavity so deep it still brings envious drool to the lips of every Catholic. Infuriated that his beloved has forsaken him to start her own business, taking other lovers, of course, in the process (reason for revenge being, I suppose, if the attractive sometimes stoop to ugly and clingy losers, they should really mean it, really be into the relationship beyond the petty pathologies we all share, or watch out), William Forsythe (later knighted by Michael Jackson, the Prince of Crack, with a crack pipe — yes, this is the kind of loogie we’re held under) finally captures his nemesis, Seagal, lecturing him instead of killing him, in movie villain fashion, but with the more interesting motivation, at least, of going on to track down his (Seagal’s) son to violate its corpse atop dad, to please both Jackson and his (Forsythe’s) cuckolding lover, and to impose himself upon the world. Here I should mention the book is dedicated to Carl Panzram. Suffice it to say, things don’t go well. Even through Kilpatrick’s confusing obsession against the slightest helpful exposition, it is implied that the characters may be alive in a distant future, have educated themselves with the kitsch of found VHSs, and are playing out these dramas as pointlessly as they are written, or as any of us might live them. In conclusion, I’d say hang a portrait of Jordan Peterson above your toilet and try again, but sometimes you can clean your room until constipation becomes a way of life.

This review may place brackets around my personal safety, but Kilpatrick will never be granted, praise God, an inch of power in the publishing field (his silent blacklisting was earned) and bankrolls the type of pathetic chaos in which death threats may or may not live up to their potential (not that he’s a great danger physically, but where there’s a malevolent will, there are endless ways). Anyway, he’ll likely be taken down by a small army of scandalous (half probably made up and the other half given improper and hysterical creed by the internet) stories if more than ten people ever read him. I should mention that the author in question does work on his work, is reformulating these small books into a super edit, a larger reworking (of a very stiltedly-ordered measure) capable of his minor (operative word: minor, but none of his words operate on a reader; they have merely been operated upon), talents, and hopes to publish that vanity alongside those decreasing few who tolerate his existence. Call the FBI forthwith if you find mention of one of his ilk publicly apologizing, or confessing to any recent consumptive uptake in anti-depressants. I, on the other hand, will say sorry on his behalf. Maybe we (or am I the reluctant, sole audience member?) should polish off that prescription for him while recuperating from the taciturn jive and eye strain caused by the next bad boy’s disputation, because this one just aged out of his brass knuckles.