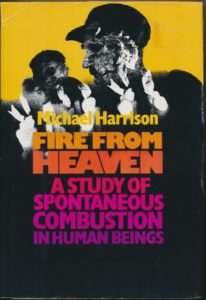 You might be on the way home from work, or nodding off during an early-season rerun of L&O:SVU, or at the kitchen table absent-mindedly tapping your phone. You feel an inexplicable sense of anticipation, like the tingle preceding a sneeze or a rest before the downbeat — and then your body bursts into flames.

As I’m sure many do, I picked up Fire From Heaven because of its bizarre cover art and inscrutable table of contents (“She Died By The Visitation Of God”, “Feedback From The Mirror World”, “Men Only – Partial And Total Combustion” followed by “The Ladies Are For Burning”). This sort of book naturally appeals to a certain sort of reader.

Sometimes described as the most thorough examination of Spontaneous Human Combustion [SHC] available, its pseudonymous author Michael Harrison (Maurice Desmond Rohan, 1907-1991) was a speculative fiction writer and noted Sherlock Holmes scholar whose life ran a meandering path through journalism, editing, advertising, industrial consultancy. . .  a hodgepodge perhaps more in line with today’s digital nomads than his contemporaries. It’s easy to see how the topic of SHC might come to ensnare an author well-versed in Holmesian deduction, as “The Fire” often leaves a neatly-arranged, telltale set of clues which leads to no satisfactory conclusion.

Even in 1976, this book would have probably seemed outlandish and Harrison’s writing anachronistic: his florid, heavily-punctuated sentences might be more at home in the previous century. The size and scope of this work (the later paperback and 1991 US editions each received additional material) speaks to a decades-long preoccupation with this unscratchable itch. And it is, indeed, thorough. Harrison cites dozens of SHC cases, from antiquity right up to the mid-1980s. And in these cases, he dutifully provides the reported circumstances and all available evidence more-or-less historically or journalistically, before reaching further afield with analyses. 58 pages of notes and bibliography await the truly intrepid.

But where Fire From Heaven becomes really interesting (or infuriating, depending on your perspective) is that it takes the position that much of our recorded human experience has either been inappropriately relegated to the realm of mythology, or outright rejected because it appears unscientific by modern standards. Harrison writes from a place of almost complete intellectual agnosticism, freely transitioning between hard science, the paranormal, religion, philosophy, occult, myth; ideas separated by millennia and spanning the globe, frequently mid-paragraph, sometimes mid-sentence.

To be candid, I had second thoughts about praising this analytic approach because of the uncertainty of our harrowing “post-truth” moment. But an important distinction is in order: If Harrison has a particular overriding ethos, it is (in good Holmesian fashion) to rely on the powers of observation above all else. Whereas America’s naked emperor fixates on bamboozling his subjects about the size of his inauguration crowd — Harrison would simply compare the photos, police reports, reportage, and other documentation to state the obvious.

But — like in the case of William Cashmore, a nonsmoker, found incinerated in his chair, with no other signs of fire in the otherwise undamaged room, and nothing unusual reported by the electric or gas utilities — in the absence of any reasonable scientific explanation in the face of hard evidence, perhaps the “obvious” answer simply lies beyond the realm of science.

And so, the reader of Fire From Heaven finds herself immersed in in an endless (and endlessly fascinating) flow of references, from the “alcoholically-inflammabilized-body-ignited-by-electric-spark” theory of Dr. James Conolly (reforming superintendent of the Hanwell Lunatic Asylum), to discussion of traditional ritual foods “from yoghurt to human brains,” to the telekenetic abilities of canned-salmon-poisoned prisoners from Dannemora, NY, to Velikovsk’s “impressive” collection of evidence of a period when the sun reversed its direction and rose in the West, to the uncommonly graceful “slow vault” of the great ballerino Nijinsky, and on and on and on, ad infinitum.

One of the purposes of this is to demonstrate how frequently such “oddities” appear throughout history, and how seriously they were taken until fairly recently. Where possible, Harrison draws from authors who share a deductive bent (like the reporter B.G. Evans, sent to cover the town of Egryn during a rash of “abnormalities” in 1904-05), but found the research to be somewhat of an uphill battle, as “the resolute obstinacy with which the ‘learned’ reject the factuality of the phenomenon is really startling to the striving-to-be-objective historian.”

Harrison’s far-reaching approach to this subject is, in part, fueled by the inconsistent (but consistently poor) manner in which the evidence in SHC cases is handled by modern investigators — coroners in particular — and he’s not above throwing in some catty remarks when he spots questionable work. (“This ability on the part of the authorities to make pronouncements which ignore the insistent claims even of the common-sense accessible to a low-grade moron is a consistent aspect of the mysterious, the unexplained.”) In contrast to these investigators, he dutifully presents scientific theories relating to SHC, including the then-nascent work on “the wick effect”. In particular, he singles out Dr. William Krogman (the forensic expert who worked with the FBI on the case of Mrs. Mary Reeser) for the breadth of his experience in the field and his straightforward assessment of the bizarre facts of this case without attempting to shoehorn them into an ill-fitting explanation.

Skeptics will naturally cite science’s systemic refinement as one of its integral components; the abandonment of alchemy for chemistry, phrenology for psychology, etc. . . . and they will fully dismiss the entirety of this enjoyable and interesting work over Harrison’s conclusions about “The Fire”. (Though ending without a definitive conclusion, Harrison narrows the focus primarily to the balance of energies between the physical and paraphysical/astral/etheric body — he coins the term “ekenergy” — and poltergeist phenomena . . . among other areas.) To a certain extent, Harrison invites this sort of combative response by virtue of his reasoning being scientific and non-scientific in roughly equal measure.

Readers who respond in this way are perhaps missing the central meaning embedded in Harrison’s unusual process. Late in the book, he quotes from an advertisement for The Psycho-analysis of Fire by Gaston Bachelard, and I find the sentiment rings just as true for his own work: The “analysis is a brilliant statement of the mind’s petal-like coördination between fact and myth. Metaphors, he said, summon one another, and through poetic imagination the most diverse images may be fused. The fusion is, of course, often at the expense of scientific knowledge. But our reveries create us.”

In the background chapter of Jessa Crispin’s The Creative Tarot, she draws a connection between historical moments of rational imposition and resultant popular swings towards the mystical. The stripping of arcane, ritualistic elements from the Christian experience during the Reformation begat the mystery cults of the Counter-Reformation (Freemansonry, Rosecrutionism, etc). At the turn of the 20th century, the Occult, Spiritualist, and New Thought movements blossomed as the industrial revolution brought the world into sharp angles. Something similar appears to be happening at present: as we tumble headlong into The Age Of The Algorithm, we can look to the #WitchesOfInstragram, tarot specialists for the queer, trans, and nonbinary communities, or LSD-microdosing tech CEOs to shepherd us in our deep, human need for experiences beyond the rational.

There remains something endlessly fascinating and deeply unsettling about SHC, because its resultant artifacts breech philosophy and discourse in the most shocking possible way. A decade after the final 1991 revision of Fire From Heaven, a paper in the Journal of Forensic Science presented results from a series of experiments related to “the wick effect” in pig corpses; providing enough facts and figures to allow the unimaginative to rest a little easier at night. But in the end, only one thing is certain: While occultists, scientists, and mystics quarrel over the evidence, somewhere a person ignites without warning and burns to a pile of waxy cinders.