The ancient Philosopher certainly gave a wise counsel when he said ‘Know thyself.’ For surely this knowledge is of all the most important. I might enlarge upon this. But grave & serious declamation is not what I intend at present.

Forgive all this egotism but I have to be my own Boswell and it would be a pity for you to lose a little local colour by artificial bashfulness in me. 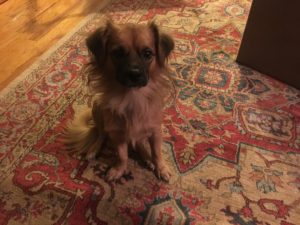 By “Boswell doesn’t know who he is,” I mean a few things. One is that Boswell doesn’t really know his name. This causes us some trouble. When people ask me his name on the street, I explain that it’s Boswell, but he does not yet know this. I further explain that Boswell has not been my dog for very long, that he is a refugee dog of sorts, saved from Hurricane Maria. If they’re still there, I can go on. If I say he’s from Puerto Rico, some people take that as their cue to say hola, to which Boswell exhibits no response at all.

But what I also mean is this: Boswell exists in space, but not—yet—in place. He wakes up in the apartment, goes on walks with me, and accepts food, but with the plain awareness that all this could change in an instant—as for him, in fact, it has. He accepts this interesting new world, but cannot regard it as anything but a vacation. And as long as Boswell and I can’t talk to each other in a language we both understand, both of us will remain unformed in certain important ways.

To be clear: We are not on unfriendly terms. If I leave the house and return, Boswell is certainly very pleased to see me. He follows me from room to room and will lie under my desk as I work. If my relationship to him remains undefined, he knows what it could potentially be. Part of persuading him he has a place here means telling him who he is. With each day, as walks and meals arrive in a predictable order, as I persuade him to walk down the stairs or past the bicycle and no catastrophe occurs, we grow closer together, but he’ll remain a visitor—and thus so will I—until we can talk with one another.

In folk tales, there are ways around this trouble. You rescue a snake and as a reward you are allowed to understand the language of the animals. Then I could just talk to Boswell—we wouldn’t need to learn each other’s languages. But no such opportunity extends itself to me. The only way to do this is the hard way. I will need to teach Boswell how to talk with me, which also means teaching myself how to talk, which means in turn being aware of the ways in which I am talking, already, all the time.

I didn’t learn to think about all this in terms of language from Vicki Hearne, but I am, when I set myself to the task of reading her, delighted to find all my concerns mirrored there. Delighted and, to be honest, a bit cowed. Hearne, an animal trainer and philosopher, loves and understands dogs at a level and with an intensity that make me somewhat ashamed of myself, and she brings a level of intellectual and disciplinary rigor to her love that makes her, in every sense, remarkable.

What Hearne despises is the sentimentality about dogs that seems so much like love. Writing about the use of correction in dog training in Adam’s Task, she comments:

Cooing, “Oh my goodness, what a GOOOOD doggie!” as one training manual actually suggests, is…profoundly cruel, dishonest and dishonorable, the flip side of a beating. Even moderately self-respecting humans grab their hats when addressed in such a fashion. And although dogs are on the whole surprisingly tolerant of our specious doctrines, many of them will, in effect, grab their hats or else, like Cordelia, attempt through precisely administered bites to turn the rhetoric.… Biting is a response to incoherent authority.

Hearne means what she says here, and later in the book praises dogs who have reminded her of her obligations through barks or bites. Her methods of training are sometimes rough (to cure a dog of digging, she participates in the digging, fills the hole with water, and shoves the dog’s head in), but more often they follow the patterns of advice you will get from most dog trainers. And that is to be, above all, consistent. Both in your actions—show up at the same times—and in your enforcement of consequences, however you choose to do that. Speak clearly to your dog. Don’t presume, until you do, that you deserve respect.

What Hearne emphasizes, alongside the language, is that a dog’s happiness will consist not in things but in relationships. A relationship with someone who blows hot and cold, who responds to mistakes sometimes with a shrug and sometimes with rage, reduces humans and dogs alike into nervous creatures with insecure identities. Similarly, in human relationships, spending a lot of money as a substitute for attention or affection isn’t a successful strategy, but when applied to dogs, it’s simply silly.

The relationship between a human and a dog is a curious thing. In its best form, it is closest to friendship. But I am not responsible for feeding my friends, exercising them, educating them, or getting them to the bathroom every day. That reality pushes people toward metaphors of parenting. But that is, if anything, worse—because parenting involves, in most cases, an eye toward eventual independence. My dog will be precisely the same mixture of independent and dependent all his life. He is his own creature, but also my creature. Therein the puzzle.

Perhaps this is why Boswell is Boswell, why the name, when proposed, so immediately fit. If I am honest, I did not have much interest in James Boswell himself prior to the entrance of the canine Boswell into my life. The sort of uneven devotion that spurs a man to produce a substantial life of his much more famous friend, however, is one model of the kind of hierarchical friendship I am developing with this dog. Boswell and I walk the city, and he trots along at my heels, taking note of what I do and say. Though I’m the one writing about him. 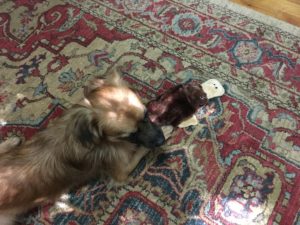 Boswell is a beautiful dog. It’s not just me who thinks so. Every time I walk him, somebody stops to compliment him on his looks and me on my luck. (Women tell me that they want his hair.) They are all kinds of people—construction workers, neighbors, couples visiting from other countries. “We had a cocker spaniel,” an elderly man from Majorca says to me. “She lived seventeen years…. We loved her.” The weight and the sadness with which he said loved still twists my gut a little.

As I’ve mentioned, when I tell people that he’s from Puerto Rico, they often try to speak to him in Spanish. In truth, it has not infrequently occurred to me that Boswell might have “language” in the way I mean it; just not mine. He is perfectly housetrained, for instance. He walks easily on the leash, at least for me. I try reading dog commands to him in different languages. He responds to none of them. Possibly, I am pronouncing them wrong.

So I am teaching Boswell to sit, something another person has possibly already done. We’ve gotten far enough along that is clear that he knows what “sit” means but is testing the boundaries of its meaning and my determination. For instance: Leash in hand, I ask him to sit. Instead, Boswell slowly stretches and then plonks down his bottom. It is a very artful bit of humor, one he repeats another time before he understands that I will not reward the joke by taking him for a walk; the third time, he sits. (Hearne also appreciates the humor of dogs, commenting on how one dog delights in bringing her totally unsuitable objects for a game of fetch.)

Not all crossed communications are so clear-cut. One fine morning Boswell bounds up the stoop to my apartment building. There, I think. That’s something. He knows he’s home. He then does not seem to recognize it for the next few days. Sometimes he seems positively wary of the stoop. Today (that is, the day I am writing this particular sentence) he recognizes it again. But I, as it happens, am always mistaking a different stoop for mine. It is a just a bit ahead and looks, until you are just in front of it, precisely the same. I thought if he knew where he was, he’d always know. But now it occurs to me that I don’t know either.

Maybe this is heavy thinking to put on such a little dog, you’re objecting. A bit wishy-washy and anthropomorphic. Dogs don’t think, they don’t talk, and they certainly don’t make jokes. Dogs don’t “know who they are” because dogs do not have a conception of self. But the truth is many dog trainers—no matter where they fall on other issues, such as correction—talk about dogs in a way that respects them as communicating beings. You in fact do have to have a certain sort of philosophy of the animal to proceed, and if your philosophy is Cartesian, you won’t get very far.

For instance: If you want to train your dog using the Koehler method—which back in the day involved throw chains, which are precisely what they sound like—you’ll discover that the Koehler method doesn’t bill itself in an authoritarian way at all. Instead, Koehler materials emphasize that the method is about teaching dogs how to choose by presenting them with both clear expectations and clear consequences. You don’t punish dogs until it’s very clear that they understand what you want, and punishment must always be followed by praise. This is to say that Koehler probably would not have burst out laughing at Boswell’s joke, but he would have known what it was.

A member of a soft-hearted generation, I am building my relationship with Boswell by means of a clicker rather than correction. The clicker helps me to be consistent in a way I fear I could not be without it. He finds the clicker a bit strange, but is willing—at least for the moment—to play along.

When I say Boswell’s name, sometimes he looks at me and sometimes he doesn’t. It seems fair to say that at this point he—probably—knows I’m speaking to him. In fact, if an utterly strange person says his name, he immediately looks at them. But he doesn’t yet trust me to mean something by it. Of course, we haven’t really known each other that long. Not even, at the time of writing this, two weeks. So we’ll keep on walking together and working together, until the day arrives that he trusts me enough to be not merely a visitor, but a friend. On that day, he’ll know who he is. And so will I.

B.D. McClay is senior editor of the Hedgehog Review.