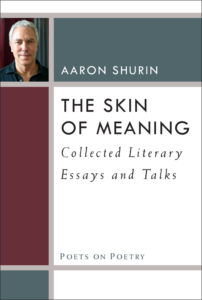 When I was young and fiercely queer (I am still queer but much less fiercely) I had the gift of being a student of Aaron Shurin’s while an MFA student at San Francisco State University.

Now I read The Skin of Meaning: Collected Literary Essays and Talks and experience the familiar torqueing, whiplashed by the exuberance of Aaron’s prose and the litheness with which he ruptures a number of troubling binaries: finite subjectivity, rigid gender roles, life and death, poetry and prose.

The sensation surfaces another memory, a poetry workshop Aaron taught in the late 90’s. Workshops, by the weight of their name alone, are usually a heavy lift: those often young and always fragile egos. But Aaron held us all with such tenderness. We, of course, had less skill and would throw awkward, sometimes hostile comments at one another. One evening we were “workshopping” (why such continual references to work as if art was drudgery) and I — out of fatigue or just orneriness — expressed displeasure at another student’s continuous reference to flowers, a new one each stanza, as if the poem’s, or poet’s, only impulse was to describe disparate flowers, objects of color and beauty to be sure, but somehow divorced from any deeper resonance with nature and sentience. Aaron averted us from a petty and potentially personal critique by bringing us back to the lyric, even romantic impulses of poetry. “It is a duty of the poet to know the language of flowers,” he says.

Perhaps he said this that night, but he certainly says it the afternoon two decades later when we sit down to discuss his recently published collected essays and talks, The Skin of Meaning, narrative, poetics, queerness, teaching, New College, Language Poetry, the life affirming sweetness of fresh pineapple, and a number of other attributes of writing and living.

Sitting in his apartment, I am struck by its elegance, struck anew by Aaron’s. At 70, he has always been good-looking — his Facebook postings on throw back Thursdays prove it — but it’s his ability to create beauty, to literally invoke it, that has most captivated me. He is a Romantic Poet in an era eviscerated of romance. Proffering imagination above reason, protesting against the bondage of rule and custom, he wakes us from our pessimistic and embittered slumber. “Rest assured, I don’t take this terminological influx lying down — even stretched out in wild thyme and woodbine — and “sonal” and “rhymic” make me delirious. I have another lexica swoon, but take the challenge. If there is a poly excess of syllables here, what might we call it? Syllabicity of course. If the syntax overwhelms, what is that? It’s syntaxation.”

Being a student of Duncan, being a gay man in San Francisco during the torrent of AIDS, Aaron writes lushly but incisively about sex, death, love, lust, language. Writing through texts, amidst texts, slipping between the genitalia of narrative itself, Aaron enacts a visceral relationship to the written word.

I imagine a physical world in which I can walk disembodied, a compassionate tale filled with actual horrors, a gigantic mountain shaped like the word “mountain,” and a volcanic core where the fire of life blazes because I say so — and by which I am consumed.

So much living happens in his lines, even when a number of essays in the collection are about illness and death, because the binaries are an illusion, even when grappling with the pandemic of AIDS.

Where the relational body and the medical body use the same skin, the metaphoric implications of AIDS seem inseparable from the literal ones. A recent spontaneous mantra, passing through my regular walks in the park, announces casually, “AIDS has destroyed my life.” Though presumptively antibody negative, to what extent is this a poetic figure, and who will chart the distinctions? The rising sentence has no emotional affect as it tests itself on my tongue, except the started recognition of its effortlessly clean transmission. I blink and scour the hillside. The gnarly pines are there, and the tiny green plums, and Mt. Diablo fudged by the haze.

The matters of fact are material. Among the interdependent life of forms characterizing human experience and the mutable various life of forms we recognize as poetry, the Human Immunodeficiency Virus is also a form of life. Unchosen, unsought, it, too, inscribes a cellular plan, like the DNA code itself is said to inscribe a measure of destiny. Interactive, its dogged conditions are inescapably creative. HIV transforms, even at body’s remove. The complexity of its microscopic purity rages outward. It is writing me.

Sitting beside Aaron, bathed together in the afternoon light, he points to his apartment windows, the structural yieldings to the sky. His current project is a book of two lectures and a suite of poems entitled Flowers and Sky (forthcoming in fall of 2017 by Entre Rios Books). “Poetry saved me, that’s for sure,” he says. “It kept me awake, kept me sane in the sense that it delivered me into meaning when I could have easily slipped away.”

Perhaps it is spring, perhaps it is the madness of the political context we are living in, perhaps it is our own shared experience of dis-ease, that turns our conversation turns toward the sacred. “Poetry is a devotional practice. It always has been for me,” he says.

And the devotion is evident. To date, he has published more than a dozen books of poetry and prose. Looking back on three decades of writing, he doesn’t see any great shifts in his work — at least in terms of the poetic and philosophical impulses that fuel it. Notes Aaron, “the act of writing is both as present and mysterious and powerful as ever. The embodiment of language is such a part of my work.”

If I knew myself well I probably wouldn’t write, but I am a sleeper. I’m drawn to writing poetry to keep me awake. What sins I’d otherwise try to get away with! This way, all I have to do is see them. Who’s out there? The baby’s eyes lock: “Now I’m making sense of the world!” I’m not a model of action, I’m not of princely behavior, but I know what sweet song is, and I can rock you to sleep with it, I’m a sleeper. But what sweet song is also the morning lark’s: wake up! Contradiction is the synchronic view of a dialectic.

What the poem permits me to make is the meaning I am after. There’s a precision of attention that clarifies relations, and when the phonemes slide I am in heaven.

A self-described lyricist, Aaron challenges himself to resist complete surrender to the lyrical impulse. Instead, he trills these melodies while composing for, in and with a contemporary context. “Binaries don’t interest me,” he says, “except for the tensions they produce. One thing about my work, I always wanted those things to co-exist — the intense powers of language — poetry and prose. Their intersection [is what] is so exciting to me. I like the frustration.”

This troubling of binaries is perhaps most explicit in his seminal (both literally and figuratively) essay Narrativity, previously published in the second issue of Narrativity, an online journal. (In a parallel trajectory that is befitting teacher and student, my trans genre piece However, is also published in the same issue.)

I am interested in the utilization of both poetic and narrative tensions: the flagrant surfaces of lyric, the sweet dream of storied events, the terror of ellipsis, the audacity of dislocation, the irreversible solidity of the past tense, the incarnate lure of pronouns, the simultaneity of times, and the weights and balances of sentences. I’m interested in lyric’s authenticity of demonstration and narrative’s drama of integration: lyric, whose operation is display, and narrative, whose method is seduction.

What celebration of the possibilities of language, what foreshadowing of its ruptures. To read Aaron, to read this collection of essays, is to touch the fragrant lure of morning dew and too to feel the stinging hairs of the nettle plants flowering below. It is not the opposition but the apposition of creation and destruction that emerges from Aaron’s work.

I have been marginalized as a poet, homosexual, counterculture protester, drug taker, transvestite and Jew; I am as interested in boundaries for what lies outside of them as in. I would like to drop my “characters” onto the sharpened points of a gemstone, so that the radial fractures would illuminate a comprehensive pluralistic image.

As a mixed race Ojibwe woman, I too am always writing between and across; singularities of identity are, by definition, not possible. But even without the complexities of ancestry, we are multitudinous. In The Skin of Meaning, Aaron provides a wise, generous, and distressed holding of this plurality.

Here a fabricated house open to the wind is both a shelter and a sharpener of the wind’s bite, a house of shadows and a moving shadow that resembles a house. Narrativity, the action not the thing, a happening semblance that is and is not a story, a gift given and taken away so that one must stand fulfilled by transgression. Narrativity, a process of integration not linear but aggregate, circular, partial—and so, complete.

In such gorgeous refraction, we can see, touch, taste, feel the complexity of living, our individual and collective homes.