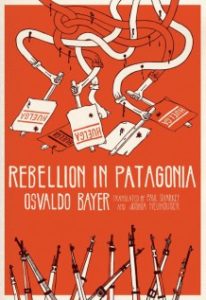 Recently translated to English for the first time since its original publication in 1972, Osvaldo Bayer’s Rebellion in Patagonia unearths a story that the leaders of twentieth century Argentina desperately wanted to remain buried.

Based on five years of research and written in an idiosyncratic, almost hard-boiled style, the book recounts the history of a motley coalition of uneducated Chilote farmhands, exiled European anarchists, and renegade gauchos who went on strike in 1920. For two years, they rode across the cold plains of southern Argentina, seizing ranches, horses and arms from a comically corrupt aristocracy, and struggling to stay one step ahead of both the police and the nationalist paramilitaries. Their story is an epic of moral ambiguity and shifting alliances, and like a good epic it ends in betrayal and cold-blooded mass murder.

In their introduction to this English-language edition, authors Joshua Neuhouser and Scott Nicholas Nappalos do an excellent job giving modern readers context for the Patagonian strikes. To paraphrase:

When the so-called progressive president Hipólito Yrigoyen took power of Argentina in 1916, he pledged to reform a county that had been controlled by a small group of landowners since the colonial era. Parliament was a volatile mix of Yrigoyen’s reformist acolytes, a smaller group of radical socialists, and a rival sect of conservative nationalists who defended the landowners — still in control of Patagonia’s ranches, where wool production was critical to the country’s newfound participation in the global marketplace. Following WWI, global wool prices plummeted. Contracts and working conditions on the ranches, which were always abysmal for the farmhands, became slavelike. Meanwhile, the aftershocks of the Russian Revolution had brought thousands of European leftists to South America in search of work and insurrection. Their agitating soon caused the confederation of labor unions, FORA, to splinter into the reformist FORA IX and the revolutionary anarchist FORA V. Argentina was a powderkeg by the time a wave of revolutionary strikes broke out.

Bayer, an anarchist himself, made no bones about siding with his ancestral comrades. He described the events in Rebellion in Patagonia in a fast paced first person narration that called situations and individuals as he understood them. Concerning the local police officers’ defense of La Anita ranch, Bayer wrote, “And so without hesitating, he firmly beats the Spaniard on the back with his saber. While this is happening, Officer Nova takes two bottles of whiskey from the store for his men.”

But Bayer was also a meticulous historian, having spent five years in Patagonia digging up old documents, newspaper articles, and personal letters produced by members of every side of the conflict. The reader is given adequate (at 475 pages, sometimes beyond adequate) proof of who said what and who lied. And there was a lot of lying — the monocled landowners and their cronies in government were a ruthless bunch.

For every wicked man it exposes, Rebellion in Patagonia also tells the story of a great man. Most captivating are the transcripts from Bayer’s interviews with former strikers, ranch servants, politicians and members of the Argentine military who knew the major players involved on a personal level. Looking back on the trauma of their youths, these men will sometimes judge their onetime comrades with contempt or speak tenderly of their fallen enemies. The result is a series of larger than life character profiles that propel the bloody narrative through layers of human drama.

There was the strike leader Antonio Soto, a level-headed Galician anarchist who some say was a slow witted bumpkin. He refused to halt the first strike wave until the ranchers and government met his list of demands — demands that will seem reasonable to most modern readers.

Soto put his faith in two militant Italian cowboys. The first was known as El 68, named after his inmate number from when he was incarcerated in Ushuaia prison, the Siberia of South America. The other was as El Toscano, “an irrepressible daredevil who has had his fair share of run-ins with the law.” Together they led bands of mostly illiterate and unarmed peasants to take over ranches, hold the ranchers and their families hostage, seize the means of production, and steal whatever they could use. They always left receipts of what they’d taken with the intention of eventually paying for it.

Our first villain, Santa Cruz interim governor Correa Falcón, happened to be a wealthy landowner himself. He used his power to declare a state of emergency in Santa Cruz and gave the go-ahead to the fascist Argentine Patriotic League to engage the strikers with violence.

President Yrigoyen, nervous that the strikes would cause the Buenos Aires working class to side against him, waited until the last possible minute to intervene. Eventually the landowners’ demands became threats, so he dispatched the apparently disinterested Lieutenant Colonel Varela to negotiate. Varela successfully convinced the ranchers to promise fairer working conditions, which the strikers’ agreed to. As soon Varela left, however, conditions on the ranches returned to normal. The strike of course picked up again with greater intensity and the body count grew on both sides of the struggle. That’s when Varela was ordered to return to Patagonia, and this time he did not come as a diplomat.

In the course of a few months, some 1,500 strikers were executed by the army without trial and buried hastily among the fields and mountains of the Patagonian outback, a most cinematic backdrop for a mass murder. Bayer, like most modern historians, suspected Varela acted on orders from the progressive president Yrigoyen, who gave those orders with the tacit consent of a liberal confederation of trade unions.

Either way, the news of the massacres eventually spread to Buenos Aires by way of the anarchist press. Varela was thrown under the bus by the government and later assassinated by a German anarchist. A resulting general strike became the first pretext by which the nationalist aristocracy was to re-impose its will on the Argentine people for the better part of the twentieth century.

Rebellion in Patagonia revealed a tragedy of the highest order, no doubt. But it’s in the story of the book and what happened to its author that we find the farce. By the time Rebellion in Patagonia was published, the events it described had been erased from national memory, just as the events that followed the book’s publication have been buried beneath the rubble of the Dirty War. Through their detailed dissection of this world historical irony, one could say that Neuhouser and Nappalos are now doing for Bayer what Bayer did for the strikers.

They tell us how in in 1974, the same year a film adaptation of Rebellion in Patagonia won the Berlin Film Festival’s Silver Bear Award, Isabel Perón’s regime took power. No doubt owing to the fact that Bayer’s book implicated her late husband in the massacres of 1922, Perón immediately banned the film and the book, forcing its author into exile for fear of his life. The governor of Santa Cruz was thrown in jail for allowing the film to be produced under his watch. Even after Perón was deposed in 1976, Lieutenant Colonel Gorlieri ordered all remaining copies of the book to be burned, “so that this material cannot keep deceiving our youth as to the true good represented by our national symbols, our Church and, in sum, our most traditional spiritual heritage, as synthesized by the motto, ‘God, fatherland, family.’”

As the new introduction to Rebellion in Patagonia concludes, “And so history had repeated itself.” Those of us in the English-speaking world do well to heed the gravity of this message.

John Farley is a writer from Baltimore. He is moving to New Mexico next week.