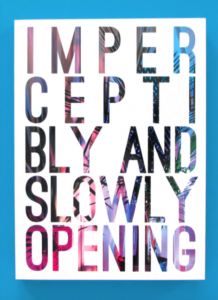 If it is “easier to imagine the end of the world than the end of capitalism,” Imperceptibly and Slowly Opening imagines an outside via the outdoors. The collection of essays, poems, artworks, and drafts imagines this speculative future via Plant Studies, which considers plants beyond their human use-value as inspo for ways to be vegetal: “beyond humanist and state-centered politics,” value-systems which rank beings via species and ability. Instead, everyone could be sun-drenched, and slow. But while this promises to be ecology through disability — “human” as entangled with and dependent on the 400,000 plant species that currently inhabit earth — Imperceptibly instead embraces Object-Oriented Ontology, or OOO, which could be the Young M.A. song but isn’t. Coined by Heideggerian philosopher Graham Harman, who blurbs Imperceptibly’s inside flap, OOO (according to Wiki): “rejects the privileging of human existence over the existence of nonhuman objects. Specifically, object-oriented ontology opposes the anthropocentrism of Kant’s Copernican Revolution whereby objects are said to conform to the mind of the subject and, in turn, become products of human cognition.” Against po-mo claims that everyone sees plants in their own (socially conditioned) ways, OOO seeks the “plant in itself.”

Imperceptibly’s title comes from Clarice Lispector’s Learning to Live: “patience: to observe the flowers, imperceptibly and slowly opening.” Against frantic precarity and overwork, schedules measured and surveilled for maximum value extraction, Lispector’s time scale is slow and vegetal, expressed “through parts of plants and through the milestones of germination, maturation, or decay” and “seasonal change, which is equally bound to the rotation of the planets and to the most appropriate periods for sowing.” Lispector’s ecology-time melds her with nonhumans and their concerns. “My tiredness comes often because I am an extremely busy person: I look after the world . . . With my glance, I must look after thousands of plants and trees and especially the giant water lily. It’s there. And I look at her.” Lispector’s attunement to “nature” is exhausting, but she can’t help it. Literally everything is alive. As Giovanni Aloi points out in “Animal / Human / Machine / Plant?,” capitalist consumption trains us to see plants as dead objects that only exist for us to consume, an anthropocentrism that he traces to Christianity. “Be fruitful and multiply,” says God in Genesis. “Fill the earth and subdue it and have dominion over . . . every living thing that moves on earth.” In Animacies, their now-classic New Materialist text, Mel Chen dubs this an “animacy hierarchy, which conceptually arranges human life, disabled life, animal life, plant life, and forms of nonliving material in orders of value and priority.” In “A Botany of Words,” Michael Marder describes how animacy hierarchies are inscribed into the etymology of “plant,” whose Latin root, “plantare,” means “to drive with one’s feet, to push into the ground . . . hinting at the sole of a foot.” This etymology, he argues, has structured a “mind-boggling number of assumptions” about plant/human interactions, including: that plants are inherently passive, domestic, can only exist as a product of human cultivation, and that they are stationary. Chen’s animacy hierarchy is literalized, not just because plants are lower than humans, but because they most come into contact with the lowest and least animate part of the human body: feet.

Imperceptibly seeks to topple this “animacy hierarchy,” arguing that plants are cognizant and sentient. While the ability to think is used to justify humankind’s domination over other species, “Cognition and Decision” by Steven Shaviro points out that cognition is intrinsic to “all forms of all life, and to all cells . . . Even literally brainless forms of life are capable of the basic operations of thought: sensation, interpretation, cognition, generating meaning and making decisions.” Bacteria gather, process, share information, and make decisions on the basis of it, while slime molds can “solve mazes . . . optimizing network patterns by working out the most efficient pathways between multiple food sources.” Plants also move, just, again, more slowly — they don’t jump or run, they grow. Compared to humans, plants also have a much better sense of light; after all, they feed on it. This photosensitivity plays out in Imperceptibly’s black and white photographs, whose monotones accentuates sunbeams lilting through grass, off the waxy top of a leaf.

Imperceptibly is strongest when it decenters humans without erasing that human/plant interactions are a result and reflection of power. Providing a much-needed “feminist intervention” into OOO’s cis white male field, Katherine Behar looks at plants via Object-Oriented Feminism (OOF), which looks at the nonhuman world via three main tenets of feminist thought: ethics, erotics, and “histories of treating certain humans (women, people of color, and the poor) as objects.” OOF shapes Behar’s art; in “High Hopes (Deux),” she fastened potted ficus plants on top of two roombas who roamed across a strip of Astroturf, moving “freely” but also while laboring, since Roombas vacuum as they move. In “Impatient Flowers,” Lin Hixson and Matthew Goulish write that the “plant-machine hybrids create a sensation — an illusion, perhaps, of double sentience: that the plants either pilot the cleaners or simply ride like passengers on their backs.” In a later interview with Eben Kirskey, Behar describes using “High Hopes (Deux)” to create “a nonhuman system for plants and machines to play and care for each other, an experience that would be censored in the typical domestic setting,” in which machines only exist as functions of human use use-value. If the fantasy of automation is that machines can be infinitely worked and “don’t require care” (which they in fact do — cleaning, part-repairs), then this conception of the mechanical can be easily “transposed onto humans as well — [such that] immigrants and women are seen as having different biology, as being more ‘machine-like’ as a way to justify exploiting them.” With the plant/machine playtime engendered by “High Hopes (Deux),” Behar hoped to both foreground and trouble versions of the mechanical used to justify the exploitation of “entire classes of people.”

Taking OOF’s interest in nonhuman erotics, “Plant Parenthood” by Joela Jacobs describes how vegetal sexuality threatened to destabilize the naturalization of nineteenth century (and yet still existent) gender and sexuality norms. Carl Linnaeus’s famous plant taxonomy divided plants into “twenty-four different classes according to their reproductive organs and types of procreation,” revealing that “the binary was not a ‘natural’ concept, since it didn’t actually exist in the natural world.” The freakiness of plant sexuality led to anxieties that observing vegetation would induce people to have sex beyond the bounds of marriage and procreation. Unsurprising: in addition to being multi and mutable gendered, plants masturbate and have interspecies sex. In Hans Heinz Ewers’ satire The Petition, a priest tremblingly describes “how the bugs, bees, bumblebees, after they have smeared themselves in one blossom with the male pollen, now fly on to the next blossom to wipe of the disgusting powder on the female pistil there and pollinate it this way! Truly, even in a brothel, you could not entertain more abominable conversations!”

Considering its interest in analyzing plants beyond OOO-spiced metaphysics, it is disappointing but predictable that Imperceptibly’s gaze is predictably white — as, predictably, are most of its contributors and featured plants. Ignoring the global varieties of plant life featured on Twitter accounts like @NatureIsWeird, Imperceptibly skews towards the minimalist potted plants of New American brunch spots and gentrification apartments, a vegetal version of “relaxed” upscale whiteness: tidy, structured, pretty; imperceptibility and slowly claiming to be the only kind of plant. While plants can be touched, smelled, heard, and tasted, Imperceptibly’s flora are mostly analyzed through sight, a “hegemony of the visual” with roots (ha, ha) in Puritanism and white spectatorship.

Instead, Imperceptibly could have looked at Black and Indigenous scholars and their contributions to the nonhuman turn. For ecology though Black Studies, Imperceptibly could have looked to a recent talk by Fred Moten and Saidiya Hartman, given as part of a lecture series titled “The Black Outdoors,” in which they argue that blackness has always sought an “outside” of multiple, horrifying forms of enclosure (the plantation, prisons). Moten and Hartman point out that blackness is itself an outsideness, operating apart from and beyond white forms of sovereignty, citizenship, and the public/private divide. The black outdoors is a site of both enslavement and refuge. Escaped slaves fled to the Great Dismal Swamp, an act of maroonage that led to one of the earliest and certainly one of the longest-lasting autonomous communities within the United States. Instead of a hyper-focus on plants as singular beings, Imperceptibly could have situated them where they mostly grow: on stolen indigenous land. Such a move could help Plant Studies think of a human/plant relationship based on “reciprocal relations and obligations” instead of just resource extraction, a way of living and thinking central to indigeneity.

Finally, it is disappointing but unsurprising that Imperceptibly does not do more to critique OOO itself. OOO’s very fantasy of examining “objective nature” with human eyes feels like a response to capitalist exhaustion and alienation, for a “pure space” in which we could finally be free, and rest. The despair motivating this philosophical pastoralist feels violent, and real; so does, unfortunately, the settler colonial legacy of looking for “an untouched frontier.” An extensive critique of OOO — from Behar, but also from scholars like Mel Chen, Alexander Weheliye, Achille Mbembe, and Che Gossett — could deflate the smooth, mistaken fantasy of nature outside the social operating under, as Gossett recently tweeted, the predictably humanist assumption of a “‘democracy’ of objects.”

Haley Markbreiter’s work is in or forthcoming in The New Inquiry, Mask Mag, the Chicago Review, and Real Life Mag. You can find them on Twitter at @dotmovfile and on Instagram as @frogenyozurt.