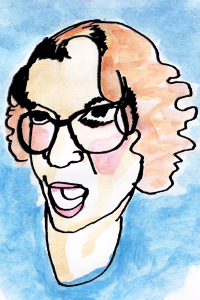 Catie Disabato writes an irregular column for Full Stop about the contemporary and sometimes not-so-contemporary literature she’s been reading.

Doesn’t it feel like the cultural currency of pop stars—and those who love them—is rising? Perhaps it’s because their bodies of work are getting more robust. In the early 2000s, pop performers like Destiny’s Child, Natalie Imbruglia, the Backstreet Boys, and Britney Spears put out hot singles but albums full of blah cuts; now, Carly Rae Jepsen writes more than 200 songs to ensure that all 12 tracks on her album E•MO•TION really fucking bang. (The first 2000s Top 40 pop album that consisted entirely of hits was The Fame Monster by Lady Gaga; then Loud by Rihanna did the same; now the practice is standard.)

Or maybe it’s because, culturally, we’ve finally (finally!!) reached the collapse of the arbitrary distinctions between highbrow and lowbrow culture (distinctions that were built on classist, racist, and misogynistic foundations), allowing for a more widespread public embrace of the pop stars’ work. Or maybe it’s because the people who make pop music, which has always been in our ears, are now in our eyes more often, through social media outlets that are increasingly veering towards the visual rather than written, as Facebook and Twitter give way to Instagram and Snapchat.

Whatever the reason, as the influence of pop stars and the music they makes expands, they inevitably must become subjects of our literary works, because literature still serves as one of our best cultural sphygmomanometers (you know, those blood pressure machines with inflatable rubber cuffs that squeeze your arm) and cultural mirrors.

“I think writing about pop culture is important, full stop, because we’re so deeply immersed in it, and we have such a weird incomplete uncomfortable understanding of what that might mean,” said Zan Romanoff, author of Grace and the Fever (out today from Penguin Random House), when I asked her if she thought writing books with pop stars at characters was important work.

“How could it not be important to write about a set of figures we interact with, at the very least by listening to the radio and the background music in drug stores, pretty much every day!” Romanoff said. “How could it not be important to interrogate the instinctive emotional reaction we have to the constructed facade of celebrity persona?” As my own novel (The Ghost Network) also took a pop star as its subject, I can’t help but agree.

Romanoff’s Grace is joined this spring release season by Katie Heaney and Arianna Rebolini’s Public Relations, just out from Hachette imprint Grand Central Publishing, and Morgan Parker’s poetry collection There Are More Beautiful Things Than Beyoncé, out in February from Tin House Books. To celebrate the release of these three fantastic books, let’s explore the new canon of pop star novels:

The Love Song of Johnny Valentine by Teddy Wayne (2013)

Kicking it off with a barn burner! This book has all the heat and energy of a three-minute pop smash. Wayne based his novel on the story of Justin Bieber’s rise (and completed it shortly before Bieber’s train wreck-y downward spiral), but his genius creative invention was Johnny Valentine’s singular first person perspective. “The voice is really a combination of a preteen innocent grammar, run-on sentences, emotional comprehension of a child colliding with this savvy, marketing cynical voice of a veteran branding executive,” Wayne told NPR in February 2013. Love Song is the gold standard of books written from the voice of a pop star. It was so fascinating and absorbing that, to this day, it’s the only novel I’ve ever read in a single sitting.

Between You and Me by Emma McLaughlin and Nicola Kraus (2013)

Of all the ink spilled about Britney Spears since the moment paparazzi photographed a recently self-shorn Spears attacking a gray SUV with a green umbrella, the ~68,000 words that make up Between You and Me are some of the worst. McLaughlin and Kraus had all the ingredients to make a bonfire of a novel, but they let every potential flame sizzle out. By making their POV character, Logan Wade, the estranged cousin and new personal assistant of their Britney-pastiche character, they could’ve captured the frantic energy that every passionate voyeur of Britney’s flameout felt with every new US Weekly story. Instead, they inexplicably focused on the quiet, well-oiled PR-machine-Britney that preceded the train wreck and climaxed in the early stages of Britney’s spiral. At the end of the novel, I was left wanting more. Leave this one on the shelf.

In Kill the Boy Band, Gold Moldavsky shifts the focus to the fandom surrounding pop stars, specifically to the throngs of girl-fans who literally and figuratively surround boy bands like the book’s One Direction stand-in, The Ruperts. What Moldavsky gets right, she gets very right; the pace of the dark, delightful romp is perfect, and she manages to strike an irreverent, satirical tone while also keeping the character relationships grounded and heartbreakingly realistic. However, Kill the Boy Band has a conceptual problem: even as Moldavsky satirizes the band members, she also positions the four female fans at the core of her book as stand-ins for all of fandom and knocks them down like bowling pins. The problem with this approach is that Moldavsky is punching down, and as a result, her novel’s heart is rotten. She’s leaning into the lazy and anti-feminist idea that teen female music fans are frivolous and vapid, instead of savvy consumers and kingmakers, ideas deeply explored by Alexandra Pollard in her The Guardian article, “Bands who bemoan their ‘teenage girl’ fans are missing the point of music,” and by Brodie Lancaster in her Pitchfork piece “Pop Music, Teenage Girls and the Legitimacy of Fandom.”

Like McLaughlin and Kraus, Zadie Smith makes her POV character (her first first-person ever!) the assistant to her pop star, but that’s where the similarities end; where McLaughlin and Kraus sink, Smith soars. Smith’s pop star, Aimee, is a Madonna figure: an aging, wealthy, out of touch white woman obsessed with a broad idea of “doing good in Africa.” The complicated dynamics of racial relationships are played out constantly by pop stars, but of all the novels with pop stars at their core, this is the only one that takes them on. With this, Smith wrote the most real-feeling pop star novel, one that isn’t blinded by the fake glitz of fame and, nor doesn’t pretend that grime is more realistic. She captures the slog, the mundanity, the frustration of having to spend your life caught in the gravity of a pop star’s orbit.

Katie Heaney and Arianna Rebolini shift slightly from the assistant-as-POV-character model to focus on the young publicist of a solo male pop star, Archie, a combination of Bieber and Harry Styles (of the boy band One Direction). Overall, Public Relations has less to say about the space pop stars take up in our cultural minds and hearts than the other novels on this list, but the gauziness of the more-central romance was so pleasurably executed that once my feet left the ground, I didn’t worry that I was floating away from Earth.

Zan Romanoff viscerally understands the unquiet mind of a confused but passionate teenager staring through the screen at the pop star object of their affection, and her imagination of the turmoil this mind would endure if they were presented with the pop star in the terrible flesh feels just as grounded in real emotion. In Grace and the Fever, Romanoff writes in close third from the perspective of her fan, Grace, but also communicates the complicated group dynamics of being a member of the hottest boy band, another One Direction pastiche (the best one on this list) called Fever Dream. Every moment of this novel is urgent and tense; while you read you’ll white-knuckle the edges of your book. Romanoff doesn’t demure from invoking the troubled-female literary canon, as in this early scene that harkens to no less than Play it As it Lays: “She puts on her sunglasses against the glare and drives fast, California-rolling through stop signs, whipping across lanes on the freeway. The familiar physical rhythm of driving soothes her. By the time she eases her way onto the 405 she’s feeling almost entirely like herself again.”

Though all these novels share a pop star as a central character, they are otherwise diverse in tone, focus, style, and genre. The pop star novel isn’t a set of hallmarks shared by various writers; it’s a motif that captures the texture of our lives among the stars. Romanoff’s examination of the relevance of pop star lit ends with a remark relevant to the core of literature as a whole: “Does it help us understand what it’s like to be alive right now better to write about pop stars? I think it does. So yeah it’s important. What else are we doing here, other than being interested in what it’s like to be alive?”