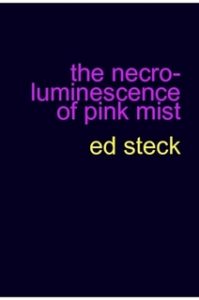 In 1990, the Belgian chemist Ilya Prigogine published the paper “Time, Dynamics, and Chaos: Integrating Poincare’s ‘Non-Integrable Systems’” through the US Department of Energy. This text expands Prigogine’s concept of “dissipative structures.” Dissipative structures can be defined as self-organizing thermodynamic structures that actively exchange energy with their environments while functioning outside of equilibrium. The uncertainty of these structures is dictated by “dynamic chaos,” which, Prigogine argues, manifests itself in even the most basic forms of evaporation and fluid mechanics. Entropy is the manifestation of energy that is ‘dissipated’ through a dissipative structure, which maintains its amorphous integrity by the expulsion of chaotic energy across the environment it inhabits. Therefore, these structures appear stable on the whole, while internally spinning constantly out of control. “Macroscopic order as manifested in non-equilibrium is the outcome of dynamical chaos. Even the approach to equilibrium becomes the result of dynamical chaos. In all these cases, therefore, we have ‘Order out of Chaos.’” 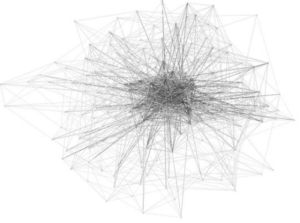 Visualization of a gradient topology. Source

I originally accessed Prigogine’s research through the US Department of Energy Research & Development Accomplishments page. The text was poorly scanned, almost illegible, and uploaded as a pdf. I struggled to decipher the warped lettering, and unpack Prigogine’s concepts with smeared graphs and obscured formulas. A few days after my initial download (and the selection of Rick Perry to serve as Energy Secretary for the incoming Trump administration) the text was no longer accessible online. “Something Unexpected Happened!,” the page stated. “You have received this page because the website has been redesigned, the URL may not be available (please check the spelling of the filename), or something unexpected happened.” I thought about all of the scientists feverishly copying and stockpiling US weather data, as if preparing for a long, hard winter. In such a conspiratorial season, I couldn’t help but consider how damning the situation seemed.

A Nobel laureate who sought to wed major concepts of natural and human sciences, Prigogine’s theories have found applications within information philosophy, media studies, bioethics, and architecture. However, in light of his theoretical work, many answers remain pursued: how can one best navigate through a rapidly dissipating structure on the horizon: inherently chaotic, morphing, fractaling, constantly destroying and transmorphing itself? Similarly, how do we manage and cope with the undoubtedly permanent ramifications of nuclear acceleration, environmental degradation, and impending arms wars? Can the entropy dictating the exchange of energy be harnessed to illustrate the quantum, or at least be better implemented to understand and criticalize human relativism?

Ed Steck’s latest book of poetry, The Necro-Luminescence of Pink Mist, opens with a handful of epigraphs, namely one from Virilio: “The pursuit of forms is only a pursuit of time, but if there are no stable forms, there are no forms at all.” Throughout Pink Mist, Steck dispatches poetic meditations on a “negative geography”: an environmental non-place enmeshed within a Prigoginian superstructure. This superstructure is the Pink Mist – a looming entity that haunts a blurry postapocalyptic atmosphere with cryptic, iridescent  language.

The ambient ominousness of implied trauma (both physical and psychic) constantly pervades the space, and Steck occasionally escapes this realm through slippages in time. By puncturing Pink Mist’s chaotic camouflage with various portals and memoryscapes, the text is launched into shattered deluges through various catalysts: cherry blossoms, a mandible, an apricot, a swimming pool, a dead dog. In a sense, Steck crafts an experience which feels similar to my chasing down Prigogine’s initial essay: an essay that shifts frequently in levels of readability, and, in my case, deletes itself before one can fully digest it.

Frequently, Pink Mist responds to Virilio in attempting to answer: How can poetry express a form that is really no form at all? The radioactivity of Steck’s landscape is palpable, and from its wreckage, a new body, and new potentials of remembering, emerge.

The text develops a romance of attrition, an erotics of a mutually assured destruction, and the psychic space of such dreamlike propositions is just as compelling as it is disturbing. The “facelessness” of any suggested characters seems important, as Steck never directly engages specific traumas, instead veering into spaces of violent synthetics — an amalgam of idealized Nature and the pristine prosody of the mechanical. More often than not, the apparent aim of these cataclysmic experiments is to destabilize these binaries and dissolve their solidity.

falling onto petals, my face

melting into fractions, or, I,

the pleasantry of dihedral gore,

narrate a fantasy: we, both ash

in the background, in the rear

view of a dissipating pink mist,

a fantasy of ash, a symmetry of

Chiaroscuro suggestions of relation perform a language of the diffused present; the horror of the immediacy of now is made apparent, in which “pre- and post- are frozen . . . ” The text becomes shards of incidents which engage themselves in alchemical spastics on the rippling surface of a field or swimming pool’s ur-space. In Pink Mist, tenderness falls victim to dissembling doubts of reality, the realization of the desperation and claustrophobia within a fugue or death state, seemingly interchangeable “fresh blood spray . . . ” and “spectral cataclysms of time.” “Hands are no longer hands,” and the very humanity of language is called directly into question, instead reflecting the form of dissipating mist, hovering over the horizon and devouring memories with the ferocity of a storm cell.

cast in its own evaporation, obsessively dusting.

Objects as well as bodies fall victim to the mist, or “the midnighting process,” where all is combined in the dissociative mainframe of non-memory. In the section titled “I am Sleeping,” there is an envelopment in the hazardous water-treading of polymorphism. The environment of an in-ground swimming pool, littered with apricots, becomes a place without time, a zone of meditative stasis that simultaneously confines and conforms. These mutations are effectively rendered with care and precision in Steck’s lyric:

A pink mist of your blood spray triggering kaleidoscopic memories of the lost, subtle daydreamt lofty memories of unmentionable pleasure: twisted locks of hair and tufts of skin, pulling taste into touching illuminations, deconstructing boundaries of sense and experience into a myriad of splattered mutual anomalies, backs of knees pressed into grass leaving indentations and nudged soil, uncanny blends of interpersonal perspiration spreading backwards over innumerable facades of the body, and the endless genteel wash of familiar skin feeling new.

Steck’s rendering of corrupted flesh reflects the Prigoginian notion of ‘controlled’ chaos: things dissimulate, associate, and recalibrate, but to what ends other than the ungraspable? And yet Steck also seems to be constantly at odds with the text, wrangling through the surging chaotic sets of images as they collide, at times formulating moments of sublimity that speak out as if across a great sea of data:

I thought: memory is the intersection of reality and fantasy.

And: fantasy is a process.

I can no longer live in the density of fantasy.

Kissing your eyeballs and licking into the socket — tasting the salt of the cavity.

Escher-like decompositions of selves, objects, bodies, places, and moments congeal baroquely, but there is nothing speculative or futuristic to this world. In fact, the world of Pink Mist feels chillingly contemporary: a collapsing of present and future, myth and memory. Steck’s deletion of the pastoral (or invoking of the necropastoral) is a practice in vibrant architecture gone awry. Previous distinctions become blurred by a disastrous hyperconsumption.

The daydream meshes with the memory in kaleidoscopic patterns, jamming self-awareness against imagined material suggesting feelings of knowing – trails growing in spurts of translucent framework, filling in gaps with sensed recognition, and utilizing the memory as scaffolding for fantasy.

Steck is a surgeon of memory, incising and restructuring vague and foreboding fictions into integral architectures of mnemonic engagement. It goes without saying that many readers will find the text abject, unnecessarily violent, perhaps too indulgent in its compilation of catastrophe. However, many of these aspects are what Steck does well, and in Pink Mist, the poet begins to address the complications of his poesis, however oblique these confrontations may be, amongst the surging post-sonics of a destroyed world or malfunctioning mind.

I am that observation extinguishing

softly, softly everything together

with the green light that I am.

We begin to see a slippage within the slippage of Steck’s established apocalypse: an acceptance of this space bordering on total absorption, a return to the internal. As much a formal inclination as tactic of survival, the final mirrored room is exposed: what role can this text and its author play other than an agent of the titular pink mist itself? 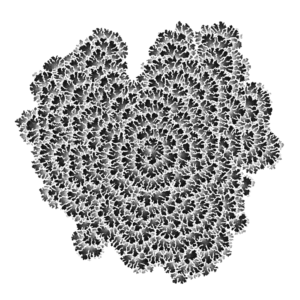 The Necro-Luminescence of Pink Mist speaks directly to the ambient anxieties of our current moment, both an internal whisper and a general knell of caution clipping across all surfaces and screens, once so well-known, now growing obscure in the mist, slowly being sucked back into the process of dissipation: the swell of an uncertain, destabilized future.

Note: Prigogine’s paper has been re-uploaded and is currently acceptable on the DOE website here.

Barrett White (http://barrettwhite.info) lives in Seattle and is an editor for Tagvverk.