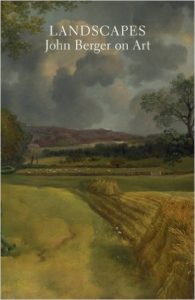 In John Berger’s 1995 novel, To the Wedding, hero Jean Ferrero sets out on a motorbike (Berger is English, after all), to attend the wedding of his daughter, Ninon. The story is narrated by a blind man, who relates the terrain traversed by Ferrero — “he is burrowing through the darkness like a mole through the earth, the beam of his light boring the tunnel and the tunnel twisting as the road turns to avoid boulders and to climb . . . what they are climbing through is becoming more and more desolate. In blackness the desolation is invisible.”

Berger is nearly 91, the subject of celebrity-studded documentaries, and he has produced a vast and varied body of work — poems, polemics, novels, creative collaborations, television series, and criticism — that documents and examines Europe, postwar and beyond, as a physical entity but also as a cultural imaginary. He has reached a point he himself has previously ascribed to other thinkers, a point of being “almost as large as nature,” and he has worked so rigorously that he has created a corpus as real as any boulder.

Landscapes, one of four books being published on the occasion of Berger’s 90th, compiles thirty-five essays, originally published between 1954 and 2015. The book is constructed in a style that doesn’t focus on its own chronology; it’s not a greatest-hits record so much as it is documentation of its own timelessness. The texts are divided into two sections titled, “Redrawing the Maps,” and “Terrain.” This division is particularly deft: What’s happening in Landscapes is an interminable materialism, wherein the land has always been here, the terrain is the same, but the lines on the map have changed. Berger traces over geographies new and old, communities imaginary and real. He writes during the height of the Cold War, during the fall of the USSR, during the ascendancy of financialized late capitalism, and during a time when even Goldman Sachs has been forced to question the efficacy of said capitalism. The topography — of craggy and riven inequality, indifference, and inhumanity, alongside outcroppings of renewal and generosity — remains the same.

Part I: Redrawing the Maps consists of a selection of essays wherein Berger analyzes and examines his own influences. In “Gabriel Garcia Marquez: The Secretary of Death Reads It Back,” Berger links the recent suicide of a close friend to the work of Marquez to the Rembrandt painting, Aristotle with a Bust of Homer. “The tradition of storytelling of which I am speaking has little to do with that of the novel,” writes Berger, “The chronicle is public and the novel is private.” This distinction, between public chronicle and private narrative, is a useful one when examining Berger’s work as a whole.

The credo of Part I (and one of the most important essays in the text as a whole) is “The Ideal Critic and the Fighting Critic.” Writing in 1959, Berger attempts to navigate the expectations of art criticism ­— its perpetual parade of posh-ish poseurs and dilettantes — vis-à-vis his own Marxism, hinging his argument on Francisco Goya’s The Third of May, 1808.

The painting is of a massacre, set during the Napoleonic wars; it is one of resistance without glory, a group of disheveled and rag-tag rebels about to be shot by a shining, uniformed firing squad. The Third of May has since inspired a tradition of its own: Pablo Picasso’s Guernica  and Massacre in Korea, Eduoard Manet’s Execution of Emperor Maximilian, Kathe Kollwitz’s The Prisoners; these tableaux are their own iconography of suffering. (Berger once wrote of Kollwitz, “Just as History was indifferent, she was caring. Yet her horizon was no narrower.”)

Through the lens of influence, Part I of Landscapes orients the reader towards the deeper ideological questions of Part II. Much as Berger’s famous BBC series Ways of Seeing taught a generation how to look at art, Part I is Berger effectively guiding the reader on how to view their own surroundings in a time that can feel like quicksand.

Berger is a writer and thinker who traffics in continuities, and Part II: Terrain, focuses on the recurrent histories within his purview: the topography of Part I’s geography. Sometimes, Berger draws the comparison, as he does in “The Soul and the Operator,” he links the Revolutions of 1989 with his memories of the Prague Spring of 1969. In other instances, history does the work. In a review of the 1958 Biennale, he writes that “Thousands of works now at Venice . . . have one image in common: the image of muck, of garbage. One walks from gallery to gallery to look at forms of decay and the dirt of putrefaction.”

A postwar tableau, a testimony to deconstruction, a Biennale that opened to mixed reviews: Berger’s quip about garbage is a crisp bit of criticism that might otherwise be an unremarkable note in the Berger oeuvre (he was not the only critic to cover the Biennale that year, when Berger reports it was panned as the Venice “Banale,” or any other year), were it not for his extraordinary prescience.  Nearly sixty years later, the entrance to the 2016 Venice Biennale, curated by Chilean architect Alejandro Aravena, was constructed from more than 90 tons of garbage.

Landscapes is the companion to 2015’s compendium, Portraits: John Berger on Artists, also edited by Overton. Through its focus on individual artists, Portraits addresses landscapes in vivid and thoughtful ways as well, offering a kind of preview to Landscapes. A passage on Diego Velazquez in particular focuses on the painter’s native Spanish steppe as a materialist influence on his practice:

The broken promises, like the fallen stones and the salt gravel, appear to guarantee that everything will be burnt to dust, turning first black and then white. And history? Here one learns that history is no more than the dust raised by a flock of sheep.

But while Portraits concerns itself with the métier of individuals, Landscapes is concerned with ideas. As a trafficker in continuities, Berger routinely must return to his own work to update it with afterwords and prefaces, often finding the conditions he decried decades earlier not to have been alleviated but exacerbated. The “Historical Afterword to Into Their Labours” presents a eulogy for the peasant, and narrates the shift from cultures of survival to cultures of so-called “progress.” Here, the concern with history re-emerges, and Berger writes that:

the historic role of capitalism . . . is to destroy history, to sever every link to the past and to orientate all effort and imagination to that which is about to occur. Capital can only exist as such if it continually reproduces itself; its present reality is dependent upon its future fulfillment. This is the metaphysics of capital. The word credit, instead of referring to a past achievement, refers only in this metaphysic to a future expectation, on the other hand, for capital, land, unlike other commodities, is not infinitely reproducible and investment in agricultural production finally meets a constraint and yields decreasing returns.

Indeed, in the Anthropocene, land itself appears to be depleting as rapidly as it is receding. There is little mention of climate change in Landscapes; instead, the text remains focused on its very human cause: greed and exploitation in the era of financialized capital. In “Ten Dispatches About Place” —the most powerful essay in the collection — Berger discusses the meaning of place in a time of mass statelessness and migration:

Month by month, millions leave their homelands. They leave because there is nothing there, except their everything, which does not offer enough to feed their children. Once it did. This is the poverty of the new capitalism.

After long and terrible journeys, after they have experienced the baseness of which others are capable, after they have come to trust their own incomparable and dogged courage, emigrants find themselves waiting on some foreign transit station, and then all they have left of their home continent is themselves: their hands, their eyes, their feet, shoulders, bodies, what they wear and what they pull over their heads at night to sleep under, wanting a roof . . . we can take account of how a man’s fingers are all that remain of a plot of tilled earth, his palm what remain of some riverbed, and how his eyes are a family gathering he will not attend.

The thirty-fourth essay opens with a mention of Eqbal Ahmed, who is introduced as easily and described as vividly as Jean Ferrero or Ninon. Ahmed was deeply influenced by the work of Franz Fanon, had dedicated his life to resistance, and Berger tells us that the first time he met Ahmed, it had been at a bar in Amsterdam, that Ahmed had told Berger the story of how he became revolutionary, and that now, in the wake of Ahmed’s death, Berger would return his name to him, but not before recounting for the reader his last encounter with Ahmed: a chance meeting, decades later, in Ramallah, Palestine. Ahmed exhorts Berger to “Look at the stones!” a command that Berger sees as if it is “an SMS on the tiny screen of my imagination.”

Berger doesn’t so much look at the stones as he looks beyond them. “Stones (Palestine, June 2003)” weaves together the ways in which even the trees of Ramallah have internalized the trauma of the 1948 Nakba. He tells us that before this, newly married couples planted roses in Ramallah “as an augury for their future life together.” This idea of augury, of the near superstitious embedding in the natural body of the world, pervades Landscapes: “Today there is not a wall in the town centre of Ramallah . . . which is not covered with photographs of the dead, taken when alive and now reprinted as small posters.” In addition to playing host to decay, the built environment is often a construct and an enforcer of violence.

Readers of To the Wedding find themselves in a setting that seems to be shifting, constantly, a perpetual flattening, a semi-permanent liminality: “Land is getting flatter,” he writes, “losing its folds like a tablecloth smoothed out by the hand of an old woman. In her other hand she holds plates and knives and forks. As the land gets flatter and flatter, its distances increase till a man feels very small.”

This smallness, this flattening of history as if it were no more than the dust kicked up by an old sheep, is the real work of Landscapes, for it makes clear to the reader that history has not arrived at its terminus, so much as it has always been here, wide as the horizon at daybreak.