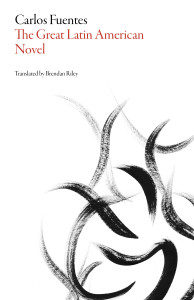 The late Mexican novelist Carlos Fuentes, in his ambitious project, The Great Latin American Novel, traces the evolution of the Latin American Novel from its origins in the Spanish conquest of the New World to the various present-day democratic states. Oppressed by the burden of reclaiming authorship from their former masters, the authors of the novels under consideration could not disentangle themselves from the task of reimagining history. Fuentes acknowledges the long shadow cast by this undeniable fact, and in these profound readings, he transforms these works into historical records with fictive elements.

This is a dense, erudite collection, with rangy metaphysical flights, a fierce appetite for the esoteric, and the bold (sometimes reductive) identification of individuals as symbols and ciphers. The overall effect of this scattered work, with its meandering chapters, its feverish heaping of ideas upon ideas, his agile and sometimes overextended reach for the clever allusion, is a dreamscape of ideas. Fuentes marches confidently into the realm of the abstract by way of extended (and often overextended) metaphor: on Borges’ “Library of Babel,” he writes that in the short story, “the reader is the wound in the book he reads: through his reading he bleeds all idea, totalizing possibility from the library in which he reads, from the books he reads, including the possibility of one single reader who is all readers.” He is mindful to the point of fussiness over matters of ancestry and inheritance. Everywhere we find collections of names, an obsession over lineage: in Bestiario, one of Julio Cortazar’s books of stories, we find “the latest descendants of what was seen, heard or dreamed by Fernandez de Oveido, Pedro Martir, Juan de Cardenas, Gutierrez de Santa Clara, Lopez de Gomara, and other chroniclers of the Indies . . . ” What is most characteristic of this collection is this hunger for interconnectedness, a genuine belief that books are rewritings of other books, that the novel is not so novel. The novel, viewed through Fuentes’ Darwinian lens, evolves only by gradual increments, by refinements and tinkerings rather than revolutions.

Fuentes’ complex reading of Gabriel Garcia Marquez’s One Hundred Years of Solitude is characteristic of his loosely defined formula for unpacking these works: the description of the author’s narrative method followed by the manner by which the narrative subverts the conventional telling of history. Fuentes writes that in our first reading of the novel, we are witness to a chronology of events, a telling of the rise and fall of Macondo, as determined by the author Garcia Marquez. But at the conclusion of the first reading, we discover that the gypsy soothsayer Melquiades has participated in the narrative one hundred years earlier (he is a sort of wizard, one defying death) and having written the record on a sheaf of papers, he is actually the narrator of the entire Buendia saga. The revelation that Melquiades, who had accompanied the town at is origins, has simultaneously lived these events disputes the factual nature of the initial reading. The second reading throws the fatalism of the chronology of events into question. As Fuentes writes, what was the concrete, unassailable record becomes only a “probable order of things.” For Fuentes, the “probable order of things” is no different from myth, which he defines as “the representation of the founding act.”

What is significant is that myth aspires toward a totality denied by an imperiously official, magisterial history. Myth encompasses rumor, legend, fable, among other elements of civilization, often deemed inconsequential by history-makers. In Fuentes’ reading of Marquez, fiction is more than a mere artifact of its period, something to be coldly appraised for its insights into a well-defined historical record. For the Latin American, whose history has either been abducted from him or vanished into a void, such works of fiction are necessary acts of recovery. Paradoxically, when the novel functions “as an act of knowledge, as a negation of the false documents of the civil state which, until very recently papered over our reality,” fiction becomes the only means to truth. In this way, Fuentes writes us into a place where the novel is act of self-determination, a matter of life and death. Passionately, he reaffirms the very root of fiction, facere, or literally, “made,” or “to make.”

Earlier efforts at confronting the anonymity of the Latin American and the impoverished state of his legitimate history vary between the desire for creation of hermitic universes as in Borges and Cortazar and the more explicit retelling of the encounters between man and unspoiled nature, as in the works of Alejo Carpentier. In Borges, Fuentes observes that totalities are often tragically pierced by a comic, quotidian incident showing that an all-encompassing universe cannot exist. In “Funes the Memorious,” Borges describes the savant who can remember everything, an individual who “always knows what time it is, without needing to consult the clock.” But as Borges writes in the original text, Funes “was not very capable of thought. To think is to forget a difference, to generalize, to abstract.” In the “Library of Babel,” the existence of a reader with his unique reading of a text collapses “the possibility of one single reader who is all readers.” Fuentes recognizes that just as there are an infinite number of readings of a single text, there are always multiple versions of historical events. The acknowledgement of this fact, the allowance for multiple readings of history, is ultimately an appeal for present-ness because, as Fuentes writes, “We only read history in the present moment.”

One shortcoming of this work is an echo of Rosalind Harvey’s charge leveled against the current male hegemony over translated Latin American authors in the English-speaking world. Fuentes’ compilation is no exception to a dearth of translated female writers, and the few tributes he does offer to authors such as Margo Glantz and Angeles Mastretta, though intermittently perceptive on topics of the mother figure and machismo, are relatively cursory. This acknowledgment of the works of a few Latin American women reads as an obligatory survey hastily appended to impassioned investigations of their male counterparts. In light of this, the “Great Latin American Novel” remains hazily defined, yet still approaches a representation for a distinctive tradition of writing rather than the defense of individual, authoritative works.

It is a testament to Fuentes’ power as a critic that he follows distinct threads in such a diversity of works. What is consistent in this compilation is that the novel both replenishes and shores up collective memory against oblivion. For Latin America and its tenuous, unwritten history, the novel itself is a form of salvation and a necessary mode of survival.