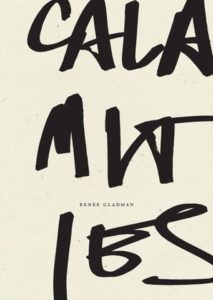 Insofar as any book could be a “beach read,” Renee Gladman’s Calamities transports the reader into the kind of peace from which possibilities radiate, prone to dissolving in the sun, the way one finds oneself on the sand, capable of taking the day in any direction, none of which compare to lying there. Nothing compares to time stolen away to be spent beaming over Calamities, each section of which begins with “I began the day.”

Gladman is the author of ten books as of 2016 and Calamities, number nine (Morelia, from Solid Objects Press, will be number ten), is transformative, not escapist. It does not provide a scintillating buzz that fixes the reader to the spot on vacation; it brings that dazzling peace to the reader wherever the reader may be. Calamities accumulates in the gaps of a day as Gladman’s diaristic dispatches illumine and expand the mundane and specific into the pulverizing and sigh-inspiring. Gladman brings out the suspense, the unease of entering a meeting where she does not seem wanted. She lets in the golden day, trapping the meeting’s attendees under a sunbeam.

Gladman’s wizardly way with spaces puts readers squarely somewhere between her and themselves: the languorous condition of Calamities.

I was a serious writer; there was nothing inherently sensual in the act of writing (hands tapping keys). So when out of nowhere I felt her pressing against my back I had to put my pen down. “What are you doing?” I asked an empty, flaming room.

Calamities achieves this condition not by taking the reader into a fantasy realm; the book is concerned specifically with the person who “called [herself] ‘Renee’ for a time” and her prosaic, earthbound business. Snickers bars monopolize her time while she tries to vacation with her mother and sisters. She explains to her girlfriend what it was like to be a lesbian in the nineties, thinking, “They didn’t remember the 90s in the way I did and didn’t have fourteen bridges built over one piece of water and didn’t have water.” She gets unceremoniously, frustratingly dismissed from her job in a scene that, inexplicably, stingingly involves the president of the university using the phrase “slam dunk.” In Calamities, the everyday details — the uncharacteristic weather in New England, the position in which she sits across from a ceramicist — are heavenly: aptly, as Gladman locates heaven in a spell in bed slipping between Eileen Myles’ Inferno and sleep.

Languorous, see? Which can’t be achieved, or is not worth remarking upon, languor, were it not for calamities. The distress generated by a calamity is either “lasting” (Merriam-Webster) or “sudden” (OED), qualities that Gladman’s Calamities shares — as sudden as the reader absorbs it, its effects have a reach and they are stunning.

Those effects are immensely pleasurable, and of the many circuitous pleasures of Calamities for devoted readers of Gladman’s work is the raveling of something, maybe Houses of Ravicka, about Gladman’s nation-state of Ravicka where her novels Event Factory, The Ravickians, and Ana Patova Crosses a Bridge — among some of the earliest titles from Dorothy, a Publishing Project — take place. Readers who were moved by her Dorothy books to dwell in Gladman’s prose have a home here in Calamities.

Of Ana Patova, Gladman describes its writing as having

moved through my life so fast, so crisply that I couldn’t find in my body any feeling of having written it—I found the memory with no problem but nothing in my muscles or in my breath that could tell me something of what it was like to have written that book . . . I wanted a duration in which the book I had written . . . a book in which fatigue made me break the line before it had reached the requisite length for a novel — it was a novel, but one tired of the form . . . I thought perhaps the reason I struggled to remember in my body this book that flashed through me was because immediately upon finishing it I went straight into drawing.

Finding writing outside, the way the reader does, entering it, Gladman rounds out the book with The Eleven Calamities, in which she brings the act of writing into the world, brings the reader into that sensation of detecting a pressing against one’s back from out of nowhere. “Language was beautiful exposed; it was like a live wire set loose” writes Gladman, “a hot wire, burning, leaving trace. If you looked into language this way, you saw where it burned, the map it made. The wire was a line, but because it was electrified it wouldn’t lie still: it thrashed, it burned, it curled and uncurled around itself.”

The subject of drawing leads Gladman to twelve, thirteen, fourteen calamities as one inspire the other: “My sentences had changed somewhere between coffee and drawing, and then I was writing to try to catch up with the change but all the time making more change because to write was always to add to something that is going its own way. You can never describe what is there, only what you see, so that what is there — if this is something you want to hold onto as well — gets its own language, somewhere underneath or throughout yours.”

What one wants to hold onto gets its own language: that is a pretty fitting description of the form of the essay in Gladman’s hands. Like Annie Dillard’s essays in her book The Writing Life, Calamities depicts the ways in which the writer’s life is romantic, sensual in spite of the “empty, flaming room” one spends it in (and in spite of the romanticized, unguaranteed results of having written). Dillard’s essays, which soar, announce themselves as such, but Gladman’s cast a welcome floodlight on the form. The essay needs Gladman as readers head into 2016, inundated by essays after essays that exercise the same muscles in the writer and the reader.

In BOMB, Gladman told writer and fellow Dorothy author Amina Cain, “I’m in the process of writing a long statement on my poetics called The Eleven Calamities. This will be a series of eleven mini-essays on my eleven favorite words or compounds that organize my thinking about writing.” Wave Poetry calls Calamities, which depicts the utilization of those compounds as Gladman writes her way through life, as “metapersonal essays.” And when The Paris Review ran an excerpt of Calamities titled “Five Things” as nonfiction, Gladman clarifies how her discovery, featured in the excerpt, that “‘the person in the world’ was not a philosophical placeholder, as I had been treating it for the last twenty years, but was actually a student in my class of eleven silent girls,” was because, as a writer, she was able to see it. Readers would do well to see what sudden, lasting effects Calamities could have on their lives.