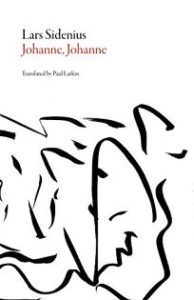 Johanne, Johanne, a new book by Lars Sidenius, translated by Paul Larken, is written in text messages. It’s not written as a text conversation, however, in which two voices dialogue in the ether, but shows instead only one side: Johanne’s. Johanne’s is the only voice we hear, the only text messages we see, as she talks to Jonah, the man with whom she’s having an affair.

The book opens at the start of their relationship: Johanne, a married book editor with a young daughter, meets Jonah, an older, single father of an adult child. A month and several coffee dates after they meet, they begin sleeping together. As the book progresses, so does their relationship — into arguments, health complications, and the weighing of large decisions. Should they buy a house? Should she leave her husband? Is their apparently fantastic sex worth the trouble?

With its single speaker and absent responder, Johanne, Johanne lives in the world of epistolary writing; but unlike the letter, which can perform as a sort of public diary, an expansive space for one’s thoughts to roam, to develop, to form argument or narrative, Johanne’s statements lack introspection, keeping the reader at a distance. Although the relationship moves quickly from casual sex to talk of moving in together, the messages themselves stay largely the same: mostly, Johanne says she misses Jonah and then says some NSFW things about what they’ve done or might do. There is nothing to say that her view of the world is the world except that Jonah keeps responding, which we only know because she complains when he doesn’t. She is, quite literally, in conversation with nothing. So, the reader becomes the silence, assuming Jonah’s place. It’s both all plot and plotless — driven entirely by what happens next while dodging description and self-reflection, leaving the reader to fill in not just Jonah’s responses, but the particulars of their relationship and of Johanne’s life.

By contrast, consider Chris Kraus’s semi-autobiographical but labeled as fiction I Love Dick, another book in which a woman writes to her non-responsive lover. The main character, also named Chris Kraus, discovers she has feelings for her husband’s friend, a man named Dick. (His name is true to the real-life art critic Dick Hebdige, whose last name is never used — called instead “Dick ____”, a.k.a. Dick Blank — but who was later identified.) Dick bears a notable parallel to Johanne’s lover, Jonah. But while Jonah serves as warped reflection of Johanne — even his name mirrors hers — Dick serves as something to mentally, emotionally, and physically fuck. When Chris Kraus and her husband, Sylvère Lotringer, write letters to Dick, he doesn’t write back, and it seems that they, too, are writing to nobody, to nothing. In fact, they are writing to each other, to themselves; in their letters, they speak about his place in their relationship, about their thoughts, and about the ins and outs of their lives. Chris, in particular, who writes most of the letters, writes as a cultural critic, and the letters develop into a critical text, examining her position as a woman, a self-professed failed filmmaker, the wife of a critic, overlooked at parties. In these letters, she writes what she has no space to say.

Without response, the letters become less missives than journals. In one of her letters, Chris writes to Dick, “I guess in a sense I’ve killed you. You’ve become Dear Diary.” Sylvère, too, identifies this, writing, “The fact that you don’t return messages turns your answerphone into a blank screen onto which we can project our fantasies.” Johanne’s texts, on the other hand, say little, and what they say, they repeat. Unlike a diary or a letter — an intimate glimpse into the mind of its writer — the texts keep the reader at arm’s length, establishing their relationship as a closed system, a secret affair that leaves out even the reader.

While Johanne reveals little about her life, what she does discuss is sex, and, also, motherhood. When she isn’t proclaiming her love for Jonah’s skills in the bedroom, she’s discussing the mundanity of raising a young child: when she has to pick up or drop off her daughter, when her daughter sleeps or wakes, how her daughter’s presence will or will not affect their lovemaking, what her daughter said about Jonah. There’s the time, for example, when Johanne compliments her lover for handling it so well when her kid pees all over his floor.

It is always, still, even in 2016, refreshing to see a sexually enthusiastic mother represented in fiction, and Johanne is certainly that. The flatness of the text messages, the straightforwardness of each statement, and the lack of description highlight these two aspects of her character, refusing to let them melt into the background of her life. But the coincidence of sexual enthusiasm and maternal affection alone does not make an interesting character. In fact, sexual mothers should by now be utterly mundane. And, indeed, the reader is reminded of the relationship between intercourse and (most) babies early on, when Johanne becomes pregnant by Jonah mere weeks into their relationship. What is interesting here is that while she is ostensibly in two sexual/romantic partnerships, the reader only sees one. Her husband, though mentioned occasionally, is largely absent, and the relationships that Johanne juggles are with her lover and her child.

Just as I briefly entertained surprise at Johanne’s mothering and sex drive, so I fell into mistrusting her. She asks Jonah why he’s ignoring her, and I wonder if he is, in fact, ignoring her, and if so, why she’s still with him. Given the lies she tells her husband, I wonder if she’s also lying to Jonah — and thus to me, the reader. And herein lies the trap: I slipped easily into doubting this woman, the bulk of whose character depends on her sexuality as played out through an extramarital affair. As a reader, I’m tricked into disbelieving her because there is no corroborating evidence. I have nothing but her word, so it becomes a he said, she said, and though — or perhaps because —  the he is absent, Johanne’s story becomes suspect. This line of questioning links Johanne’s word inextricably to Jonah’s, a linkage that happens all too often to women whose word is only trusted if it’s verified by a man’s account.

While on its surface Johanne, Johanne depicts the tale of a young mother’s affair, its core conflict is that of a woman telling a story that the reader can’t confirm. It is precisely because I Love Dick delves deeper into the psyche of its main narrator that the narrator seems more believable. More facts arise, more details surface — and, of course, there is her husband there to provide his statement, in the form of his own letters. Johanne, Johanne offers no such worldbuilding, so it falls only to Johanne’s brief messages to provide a story for the reader, a story that revolves around a central lie. With nothing to put Johanne’s narrative in perspective, her story, and even her character — like the messages — seem to exist in the ether, unsubstantial and unsubstantiated.

Galen Beebe is a writer, multimedia artist, and co-founder of Etc. Gallery. She received her MFA in Writing from the School of the Art Institute of Chicago and is a contributing writer at the Bello Collective.