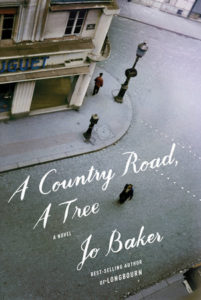 Had Irish novelist and playwright Samuel Beckett been of a less pinched, less despairing mindset, he might have turned his and his eventual wife’s World War II perils and privations in occupied France into a page-turner every bit as suspenseful, romantic, expansive and/or darkly wacko as books about that war by Hemingway, Heller, Mailer, Bowen, or Vonnegut. For the couple’s life-on-the-run and –in-hiding from 1939 through V-Day was certainly the stuff of a novel.

However, the quiet Irishman was not of a War and Peace outlook. After the war, he wrote, not a cinematic novel, but, instead, three classics of the existential, anti-novel genre, books whose woolgathering main characters spend inordinate amounts of time getting into and out of bed, rooms, wombs . . . and on and off bicycles.

Next, Beckett wrote a play — a teasing, absurdist work called Waiting for Godot. Arguably the most discussed play of the Western mid-century, it featured two tramps going nowhere. It was a play in which “nothing happens, twice.”

So now, some seventy years later, in A Country Road, A Tree, Belfast-born Jo Baker has written the wartime Beckett bio-fiction that he never wrote. And, remarkable to behold, she does it with heart and insight.

She begins her novel in 1939, when against his mother’s wishes Beckett (then 33) returned from Ireland to Paris, where, for the prior two years, he had been living the scapegrace, bohemian existence of a struggling writer. Also, in Paris he had recently been stabbed by a pimp. Those were two good reasons he should have stayed in Dublin. A third was this: because France had just declared war on the menacing Germans.

Back in Paris, French police were sweeping foreigners into vans and driving them off, who knew where. True to form, Beckett hadn’t yet gotten his papers in order, and was for that reason vulnerable to such sweeping. More worrisome still, the problem of incomplete documents would only worsen if the Germans ever marched in.

To no avail, Suzanne Deschevaux-Dumesnil, the French piano teacher (then 39) whom he had been seeing since the time of his stabbing, went with him to the Ministries to see about his papers. She also cleaned his sheets and hung curtains in his windows. They briefly discussed his returning to Ireland — until Beckett put in, “I certainly can’t write there.” “Well then,” Suzanne answered, “you must stay, whatever comes.”

What came, of course, was the Germans. Baker tells the story of the marooned-by-choice couple’s subsequent wartime travails in a mesmerizing, brushstroke present tense that makes palpable their ceaseless physical discomforts and nervous anxieties as they freeze, and starve, and twice flee Paris: the first time in the biblical exodus of bodies and baggage that left the city in advance of the Germans’ entry; the second time, as a solitary, targeted couple, wanted because Beckett had been carrying and translating reconnaissance messages for an underground cell discovered by the Germans.

Yes, the writer whose name would in the 1950s become synonymous with existential paralysis actually acquitted himself rather heroically in the war. He ran messages, and towards the end of the struggle, he also ran explosives. What’s more, he looked out for others. In the time of German food rationing, he reached into his and Suzanne’s already barren pantry to give to the desperate family of Paul Léon, the Jewish friend and amanuensis of James Joyce (Beckett’s friend too) who was arrested by the Nazis and who eventually died in Auschwitz.

The book’s other hero is Suzanne, his long suffering, purposeful companion. She too was put at grave risk by Beckett’s anti-Nazi activities, yet she little balked, save to remind him that she needn’t know the details of his stealthy comings and goings. Meanwhile, on the domestic level, she supplies several of this book’s more affecting scenes, among them, one in which she improvises a dust-cloth tent in the middle of their frigid apartment — a tiny, body-heated crawl space into which they could slip fully clothed at night. In a less convincing scene, she knits her sidekick fingerless gloves so he can carry on with his writing during the war (something he little does).

Of the four big Beckett questions that have long beguiled Beckettians, Baker’s novel takes discerning throws at three (omitting only the issue of his quarrel with an absent God, no small omission given Godot’s touchstone usages in that question’s regard in the mid-century’s cultural conversations).

As to how it was that the bookish and endlessly folded-in-upon-himself Beckett rose to the improbable levels of action and charity to which he ascended during the war, her fiction ascribes cause to his sympathy for the Jews (whose Book-centered, Word-centered lives both he and Joyce admired), to instinctive stirrings of conscience in situations so appalling only a rock could remain idle in them, and to his need to prove himself to his mother. As Beckett had readied himself for his return to Pairs, she had lastly badgered him, “And what possible use do you imagine you would be” in a war zone? With these of the fiction’s answers, no scholar is likely to quarrel, for they are the answers that scholarship itself has here and there advanced. Nor will anyone object to their rendering in scene and incident in Baker’s pages, for those pages are well-imagined, well-researched, and convincing.

As to how it was that Beckett suddenly found his writer’s voice in 1945 (after many years of false starts and halting progress before and during the war), Baker’s answer is, again, not to be quarreled with, for this time her source is Beckett himself. Spoiler alert: He found it in a vision in his mother’s house, a sudden flash of self-knowledge and aesthetic insight that came to him towards the end of the brief Irish interval that separated his leaving France at the end of the war and his getting back there as a driver and warehouser with the Irish Red Cross a few months later. Baker renders the scene in which he has this epiphany in a mild Irish gothic — cousin to, if not sibling with, the sturm und drang-ish scene suggested by the Krapp’s Last Tape passage with which the scene is routinely associated. Fair enough this re-lighting, given the Irish penchant for the gothic (think Maturin’s Melmouth the Wanderer; think Stoker’s Dracula; think Yeats when he wrote fiction).

Lastly, Baker’s novel takes on the most intriguing question of all, that is, the question of Beckett’s and Suzanne’s relationship. Of what was it composed? Some combination of habit, affection, resignation, dependence, and hostility — as is the relationship of Waiting for Godot’s Vladimir and Estragon? Or of the abusiveness and servility suggested by Pozzo and Lucky’s tethered togetherness in the same play? Or, to be scarily complete in our speculations, of the abusiveness and servility suggested by any number of appallingly fated character pairs in Beckett’s fiction and drama (think imperious father Hamm and care-taker son Clov in Endgame; think, too, of the titular hero of Molloy contemplating chaining his son to himself.)

Of these two options, Baker very emphatically chooses the more benign first choice and makes it yield several of the novel’s more affecting scenes. Among them, the already mentioned one in which Suzanne constructs a tent in the couple’s freezing Paris apartment, and among them, too, the late-novel moment in which she gathers in the uniformed eyeful that Beckett is when he comes back to her unannounced at the end of his Red Cross tour: “And in uniform! Trust him to spend the war in hand-me-downs and hedgerows and then deck himself out in conspicuous uniform just as everybody else is shedding it.”

However, Baker is no sop and her Beckett no saint. For days and weeks at a time, he backslides into the torpors and connivances that would become his oeuvre’s signature male posture. Baker’s Beckett is constitutionally an impervious-to-love lover, and in one late episode of the novel she pictures him doing things that forecast the singular circumstances in which he and Suzanne finally married in 1961. No, the saint in Baker’s novel is not Beckett, but Suzanne. On the eve of humankind’s deadliest war, she throws in with a hopeless writer-tramp going nowhere. And she stays in. That the two go nowhere once allied — well, that’s not Baker’s understanding of what happened.