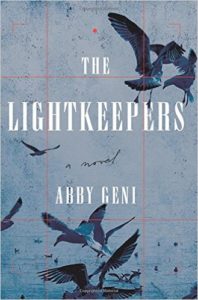 Abby Geni’s The Lightkeepers begins with escape. In a Hitchcockian scene that conjures menacing birds — not sweet twittering creatures but vengeful, predatory and territorial ones — Miranda leaves the South Farallon islands, relieved and anxious.  As Geni’s novel makes explicit from its earliest pages, the islands are dangerous, and they emerge immediately as a character, vivid as the protagonist despite having no voice of their own. It perhaps is no small coincidence that Hitchcock’s movie about predatory birds takes place in Bodega Bay, not far from the islands. There is something about the birds here, and about three-quarters into the book they wreak their havoc in a brutal manner. It’s enough to bring out latent ornithophobia in anyone who only ever thought of birds as cute, fluffy, or inconsequent.

After the prologue that begins with Miranda’s escape, the book starts to slowly build narrative, flitting between past and present. It is a murder mystery that invokes some common mystery elements: a group of strangers brought together by similar goals or interests to live together in one house, willingly (in this case) sequestered in a dangerous, outlying place, and a death that might not be accidental. It also utilizes Gothic tropes: ghosts, hauntings, paranoia, loneliness, dreams, nightmares, and a narrative framework structured through the letters the main character writes to someone in her past, her dead mother. Miranda is a nature photographer who has lived a peripatetic existence; she lost her mother when she was young, and this event has colored her life since. She has traveled from place to place in service of her art, camped out in tropical rainforests and in the Arctic. She goes back home every few months to the family house her father still lives in, where the two of them orbit around each other like roommates who avoid talking too much lest they discover they have some serious unfinished/unsaid business that will burn the house down. From what we learn of her, she has only fleeting sexual encounters and has not sustained a long-term romantic or platonic relationship with anyone.

Because the islands are secluded, a hazard to get to, and a thriving ecosystem in sea and air, the only other people there are five biologists and an intern. Two of them, the oldest and longest-residing person, Galen, and a younger man named Forest, are described as otherworldly: “The elderly one could have been cast in a movie as Poseidon — a thatch of silver hair, a weather-beaten face, an air of gravitas. The younger man was as slim as a sapling. He had calloused, muscular hands. A minor deity, perhaps. A sprite with limited but surprising powers.” This form of writing, layers upon layers of description, is characteristic of Geni’s style. The result is a book that brims with descriptive writing interspersed with narrative in which events on the island occur in a cumulative manner. Among the central occurrences on the island is Miranda’s rape, narrated in hazy, surreal prose that attempts to capture the fragmentation of time and space that occurs during a traumatic event, the way it ruptures one’s stability and sense of self. Soon after, her rapist is found dead through what becomes the central mystery of the story, and the intern named Charlene is injured. Towards the last quarter of the book, there is another death.

From the start it’s clear that Miranda is a character that comes to us at a tilt, not in full view, like a technique in photography she favors: the Dutch angle. A Dutch angle, Miranda explains, is “used for dramatic effect”, and it can “convey disorientation, unease, intoxication, even madness.” We learn that Miranda is called Melissa by the others through some misunderstanding, and that she doesn’t correct them for a long time; in fact, not at all. It is Galen who finally reminds everyone of her actual name after federal agents arrive on the island to question them about the circumstances of the first death. Additionally, after writing character sketches about the people in the house, Miranda abruptly introduces the intern, Charlene, whom she has not mentioned even once for a long time. This delay in talking about Charlene is odd, and indicative of a narrative where it’s never certain if anyone ever knows anything at all or is willing to reveal what they know, if they do.

The novel is narrated almost wholly from Miranda’s point of view. She writes about how her memory of the days immediately following her mother’s death is empty: “I blinked. Time passed. I was standing outside, on the pavement, in the clean wind. This kind of thing happened often, for a while. Blink, and an hour would elapse. Blink again, and a whole afternoon might go by. It was as though someone were slicing at my internal calendar with a pair of scissors, removing time.” Miranda is damaged, and the trauma she endures on the islands after being raped by Andrew will also contribute towards a block in her memory. Her island-mates are similarly distant and shut-off scientists who, in the face of the full wrath and brutality of the specimens of their study, consider human lives not very interesting. That’s why they study birds and sharks and whales; or perhaps, studying the cycles of nature through these animals, they have grown to find human lives ridiculous, almost negligible. In any case, Miranda moves through the fog on the islands and the fog of her trauma without much intervention from anyone besides the kindness of one colleague, Mick, and the cryptic attentions of the island’s resident Prospero, Galen. The same non-intervention the biologists practice on the island — not to leave a human mark on the fragile ecosystem and thus to merely observe, even when a baby animal is dying and could be saved by a small push in the right direction — is extended towards each other.

Geni has taken her time to build up to a closing revelation, and the passages of nature writing, of which there are many, are fascinating; some can evoke both the mystery and the menace of the wilds, demonstrating how people can simultaneously be enchanted by and terrified of unknowable and impenetrable life. The gothic elements that introduce the psychic unknowns, the destabilizers of reason, and the fear that emanates from a secluded place and stories of ghosts are put to use here to render self as uncanny, or figurally multiplying; in Freudian logic then, self cast as a marker for the return of the repressed. The ghost that haunts the islands might be a clue about Miranda’s sense of self, a sense of loss that is not only about her mother but the loss of some key aspects of herself after her mother’s death.  That the reader can’t be made aware of the gaps in Miranda’s memory until the final pages, when the story is summarized by Galen, is a hint that the scientist’s dispassionate observations about both the human interactions in the house and the wildlife on the islands might be more truthful than the subjective, highly-personal narrative Miranda produces in her letters. The metaphor of her life’s work of photography and it’s relation to memory work, in framing a moment in time for posterity, is laid on thick by Geni throughout the novel; Miranda comes to the conclusion that photography is, at its root, a “wonderfully violent” practice, and often disembodied and fractured. It rarely gives the whole picture: “I have always thought of photography as truth-gathering. I have imagined my pictures to be immutable and honest, as sure as the ground beneath my feet. But now I see that truth and photography are fundamentally at odds.”

In this sense, Miranda has a fundamental thing in common with another narrator in recent contemporary fiction whose version of events become uncertain after a lapse in memory is revealed, Julius in Teju Cole’s Open City. That Julius is a man and Miranda a woman puts them at opposing spectrums in society structured by gender difference and male supremacy; in matters of heterosexual relations depicted in both books, one is the oppressor, the other the oppressed. However, Miranda isn’t entirely innocent; whether or not her actions should be judged by the law as such, as a response to gendered violence, is a matter that the novel answers in its own way. Miranda’s lack of self-awareness is chilling and troubling, especially as she departs the islands to pursue what she believes will be a more a stable and grounded life, but it is possible, even necessary, to empathise with her. This narrative, steeped as it is in Miranda’s shock, trauma, and (later) ennui, moves forward by a series of events. The Lightkeepers, despite its ghosts and horrific birds, is not a conventional plot-heavy mystery or horror story. And it is not definite that the language, attentive as it is to details and gloriously wild on description, or the admittedly conventional ideas on matters of death, violence, and photography, or even the core emotional affects here, are enough to elevate this to a prose work where plot conventions don’t, or even can’t, matter. Structured as a gothic mystery but eschewing its conventions, The Lightkeepers inhabits a vague space like its protagonist: absorbing and compelling, but unable to leave a stronger impression.