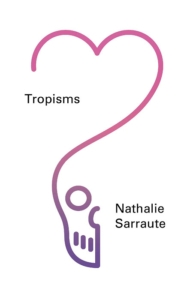 Tropisms borrows its name from a biological phenomena frequently associated with plants. The word refers to the spontaneous growth or physical turning of living organisms in reaction to an external stimuli. An example of this is hydrotropism, in which movement is in response to water or geotropisms, in which gravity affects the direction of growth. Nathalie Sarraute imagines our subconscious, irrational energies to behave in a similar manner. How would you draw the shape of your unconscious, the frontiers beyond what you may sensibly know? Sarraute visions these pulses as fleeting, indecipherable, diffident movements — so rapid we are unable to comprehend them in present time. She helps us to see by protracting time, stretching it until seconds transform into entire plots. She would perhaps not use that exact word — most reviews point to Tropisms’ plotlessness, how it resembles more so blurred, slight moments than a novel proper. It’s true that Tropisms deliberately avoids traditional approaches to the novel as defined by nineteenth century French conventions. The book turns away from Balzac, Flaubert, Stendhal, Maupassant. There are no named characters, no linear progression that includes a rising-climax-falling structure, no sumptuous descriptions of setting and place. In an interview with The Paris Review, Sarraute explains:

I knew it seemed impossible to me to write in the traditional forms. They seemed to have no access to what we experienced. If we enclosed that in characters, personalities, a plot, we were overlooking everything that our senses were perceiving, which is what interested me. One had to take hold of the instant, by enlarging it, developing it. That’s what I tried to do in Tropisms.

Sarraute is often grouped with the Nouveau Roman, a loose association of French writers who in the fifties and sixties sought new expressions of the novel, in reaction against what they perceived to be a suffocating literary inertia. Other writers included Claude Simon, Alain Robbe-Grillet, and Marguerite Duras. For various reasons, these authors and others regarded the novelistic form with suspicion, indifference, and disdain. Duras called for a turn towards wildness; a writing yearning to be more inscrutable. She writes:

I think that what I blame books for, in general, is that they are not free. One can see it in the writing: they are fabricated, organized, regulated; one could say they conform . . . Even young people: charming books, without extension, without darkness. Without silence.

In warping characters, their motivations, and time, Sarraute undoes narrative cohesion in favor of extending silences, instants, that which cannot be easily rendered. Like Duras, Sarraute is uninterested in mere technical precision. She pushes writing into other realms. Writing becomes sensing, not the reporting of what was sensed. It is tempting to thread a correlation between Tropisms’ unwavering pursuit of sudden moments and our current frenetic instant gratification culture; however, this connection seems incomplete. Seventy-seven years later, Sarraute’s writing continues to unnerve and interrogate our readerly expectations. Whereas our contemporary instants promise distraction and ease, her instants ring out prolonging, effervescent stillness. What can be learned from our descent into the text’s gesticulations?

Twenty-four tropisms unfold across fifty-two pages. In removing the noise of the novel’s conventions, Sarraute instigates a journey into internal frontiers, a vibrating communion between reader, writer, and text. We must weave together meanings through repeated readings for Tropisms does not provide any overt exposition. Why does the text resist our efforts to mindlessly consume? Despite its briefness, one leaves the novella awed, exhausted, percolating. Sarraute’s prose bubbles with a potency but it takes concentration to clearly apprehend their intangible forms. Take, for example, the first tropism, which begins:

They seemed to spring up from nowhere, blossoming out in the slightly moist tepidity of the air, they flowed gently along as though they were seeping from the walls, from the boxed trees, the benches, the dirty sidewalks, the public squares.

The description gives an impression of overgrowth and sprouting, as if they refer to weeds or insects. Reading on you realize that they make “knots” before shop windows, they stare at displays of linen and mechanical dolls, they have children who “listless, waited patiently beside them.” Unlike most figures in the stories to come, they do not seem to be able to extravagantly spend without thought. They wait before the windows – “an offering” – silently in rhythm with a doll whose eyes and teeth light up and out. Why do these figures prolong their departure? Why must we spend time absorbed in their suspension? In purging the text of identifiable features, Sarraute shifts our attention to subtler concerns. Characters are reduced and replaced by sentient sensations. We are to focus not on they as individuals, but upon their ability to clog the streets with their glow of “desperate satisfaction.” Thus, our interest lies in they as an emotive force. For Sarraute, nineteenth century understanding and construction of character is too neat, too practical, too automated. Her text seeks what occurs below the surface of character development. How to describe those impulses, desires, processes that exist before speech, before comprehension, before consciousness?

An author can write a novel that is a marvel of invention and technical ingenuity. But what does it mean if they remain separated from the movement of living itself? If it is always explained from the outside rather than embodied through the interior and/or collective? If it is naturalistically rendered, but devoid of those mystifying textures and shudders that resist logical explanation? Sarraute presents us with glimpses of familiar characters, settings, and plots: despondent housewives, romantic servants, triumphant “sensible men”, isolating urban environments, bourgeoisie obsessions and affairs. A woman gossips in the kitchen with her cook while their family member, nauseated by their boorishness, fantasizes about their demise. An elderly man aches for “fresh, young creatures” to torture, unaware these young woman view him as sour infantile fool. A group of friends masochistically bend to the whims of a sadistic male acquaintance. Swarms of women go from shop to shop in never-ending search of the perfect outfit. Each of these scenes contain moments of rupture, instances where unconscious energies burst forth to reveal combustible truths.

In Tropism IV, a man and a woman converse. We do not know where they are nor the exact contours of their relationship. All we know is that the man is frightened by her mildness and bulging eyes. He imagines what it would take to break her smooth surface:

“Well, then!” How are you?” He would dare to do that. “Well, then! How do you feel?” he would dare to say that to her – and then he would wait. She should speak, make a move, show her real self, let it come out, let it finally explode – that wouldn’t frighten him. But he would never have the strength to do this. So he was obliged to check it as long as possible, to keep it from coming out, from spurting from her, curb it in her, at any cost, no matter what.

He talks maniacally to keep her explosion at bay. Why is he so afraid to hear? He sees her sitting and immediately must “divest himself, give her everything” in the attempt to keep her just as she is: silent, still, mild. The very thought of knowing her intimately sends him to the “verge of panic.” The text’s characters have been trained to only respond to masks, to the surface of things. When confronted with uncertainties, all that we do not know, figures frantically distract, placate, repress. Where does this fear originate?

In her essay, “Age of Suspicion”, Sarraute remarks that every tropism requires a force, or partner, to bring it out from beneath. This can be a person, object, or situation. One could describe tropisms as a dialogue between external stimuli and our subconscious movements. With this in mind, I find the social settings of these vignettes to be compelling. As noted, these “inner movements” occur in apartments, in dining rooms, in universities, in shops – in other words, stereotypical middle class markers. Tropism X details, with shattering wit, ladies who spend their afternoons in tearooms picking at decadent sweets. These women resemble birds kept in a cage: “They, they, they, they, always they, voracious, chirping, dainty.” They speak of their metamorphosis, how this or such outfit will dramatically change their personality. Throughout they maintain their cheerful appearance, painted on with the help of make up and persistence. Their conversations consist of the same things, meaningless hearsay, repeated until it becomes a kind of ritual:

These women remain unaware, they pick apart and chirp, all the while kneading violently the unfulfilled parts of themselves. What do they truly need? For Sarraute’s figures this question is more menacing than any potential answer. What could one need when awash in material comforts and societal privileges? The conventional morality of the ruling class, the impersonality of the city, the ruthlessness of social relations – Sarraute finds these stimuli to be at constant odds with our deepest instincts. More troubling, though, is our cycle of complicity. Why do we silence our limitlessness? The penultimate tropism begins with a woman denouncing her class as hollow, old-fashioned clichés. Despite her repulsions, she cannot fully remove herself. Their smooth surfaces confine and surround:

Little by little a certain weakness, a certain slackness, a need to approach them, to have   them approach her, made her join in the game with them . . . very docilely, like a good, amenable girl she gave them her hand and walked in the ring with them.