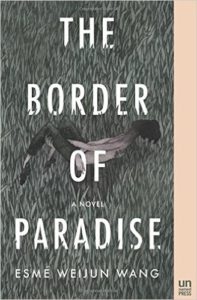 Literary stories identified as being about the experience of mental illness frequently include somebody wandering from their recognizable life, through a border, and beyond that into a wilderness of disordered moods and persistent delusions. They find out the name of the beast that goes with them and if it can be endured. Consider The Bell Jar and Girl, Interrupted. Esmé Weijun Wang’s debut novel The Border of Paradise is a different kind of narrative about mental illness.

Wang, who lives with late-stage Lyme disease and schizoaffective disorder, has written essays about how shake-ups in the psychiatric profession affect people with mental illness, the persistent cultural lenses through which schizophrenia is viewed, the relationship between having a mental illness and appearing ill, and, breathtakingly, the experience of psychosis, most notably in her essay for The Toast titled “Perdition Days.” With The Border of Paradise, she demonstrates that her creative powers are comparable in magnitude to her critical ones.

In the novel, which publisher Unnamed Press describes as being about “the inheritance of madness,” the titular borders are defined by physical locations and cultural expectations, and the people who cross them wind up lost. The great heights of postwar Brooklyn give David Nowak, the heir to a piano factory fortune, vertigo. Free from obligations, David travels and decides Taiwan could portend something radiant. And because he decided it, it does – but the person onto whom he projects those expectations is Jia-Hui, a madam’s daughter, surrounded by men who come in without the means to buy a woman’s affection for more than a brief time. David can afford a lifetime. They move together to Polk Valley, in the Sacramento area, in a gold rush for domestic bliss. There, David stumbles into Marianne Orlich, a girl from the Polish-American community he grew up in. He pursues the happiness he thought she promised in their youth. In the end, it is understandable when David’s daughter, one of the two children that survive him and Jia-Hui, quits the story by torching their house.

Something is wrong with David. But instead of diagnosing him, Wang introduces the events of the novel through David’s point of view and focuses on how his illness informs his perceptions and decisions. David envisions paradise as a wife, kids, and a domain of his own. When he reflects on his family in the beginning of the novel, he sees them as an idyllic unit from whom he must keep secret the tragedy of his deteriorating state as he hides in a hotel, contemplating what brought him to his end. But what is even more important is what David doesn’t or can’t show. That he has always been unsettled, that something has been festering in him since his youth in Brooklyn. That on the other side of the border of his fantasies, in reality, his family is not something out of a midcentury advertisement. David refers to Jia-Hui as “Daisy,” his “Oriental lamb.” He does not demonstrate that he hears her or acknowledges that she is in fact a ferocious woman who he has caged, who he keeps isolated. Or that he is alienated from his son. Or that his daughter is the product of an affair. He should have this perfect family, so he does. The reality that he does not presses into him until he commits suicide.

The Border of Paradise is ultimately multi-phonic. Wang maneuvers deftly between voices, and the played-out, tepid pretentions of David’s voice are shown to be just that – purposefully familiar and affected – when Jia-Hui’s voice starts scorching the page.

My mouth hurt from speaking English. The muscles around my lips and my cheeks ached. In my dreams voices stretched into long, silly words that meant nothing, and I woke up saying “milk” or “glass” before tumbling back into the sleep of nonsense dreamers. Soon I vomited over and over at the side of the road while David reached over and rubbed my damp neck, and then I craved all kinds of things: hot buns filled with pork, cold and briny seaweed, red bean popsicles.

The reader discovers that David’s coming to Jia-Hui is not a wooing. She is restless and bored. Her experience of being with David and his mother is full of holes, individual words she can’t recognize and drops out of conversation. Jia-Hui’s whole experience of America becomes about exposing the lacks in the life David is trying to build with her.

The sudden craving was monstrous like a thing already in my mouth that could not be tasted or swallowed but just between my frozen teeth with a jaw stuck open, and my longing for these foods was not a longing in my stomach but something jammed deep in my throat. I awoke in fancy motels with mouthfuls of blood, the insides of my cheeks chewed ragged and raw, and I spat and spat into porcelain basins while clutching my belly. I was inconsolable in the most beautiful of hotels and I sobbed on a ledge of the Grand Canyon, where I was sure that my longing would push me in. David said, over and over, “Oh, sweetheart.” He understood the vomiting as morning sickness and something that all women experienced in pregnancy. He understood the mood swings as common, and understandable for a biological process that would result in the production of a human being who was our baby and our joint accomplishment. He washed the blood out of my pillowcases. He stroked my hair, and I loved him.

After David and Jia-Hui have their son William, David sires Gillian with his childhood sweetheart Marianne Orlich while she is in a convent. Jia-Hui tries to overcome the horror of having to take care of Gillian by re-contextualizing Gillian’s place in their lives as a tong yang xi, who would be raised expressly for the purpose of being their son’s wife. Jia-Hui’s childhood best friend Fatty was a bad tong yang xi, abandoned by the family into which she was adopted. The best hope for Marianne is that it is at least possible for her to be a bad tong yang xi. Both David and Jia-Hui fit their lot into what they believe they ought to have based on their respective cultural milieus, and it is the madness ignited by their reactions to those expectations that make Wang’s novel a different kind of narrative about mental illness. The border of paradise is the line they cross in pursuit of what they think they should have, when reality becomes infected by ideals.

The borders of William and Gillian’s paradises are drawn by their confinement to their childhood home in Polk Valley, California, where they are a country unto themselves. Marianne cannot figure Gillian out as she articulates some of their characteristics and manners. Gillian is beyond categories, and even as Marianne dreams of making her the daughter she is supposed to be, to her Gillian is as fit to be that as Jia-Hui was to be David’s “Oriental lamb.”

And yet I continued to vomit everything that I put into my mouth, my throat hot as my eyes watered and burst blood-shot, until finally I pushed away a basket of french fries that sat before me in a blue-and-white checkered diner, where the flies landed and rose, and I was resolute: I would not, and could not, eat those french fries, hamburgers, or bowls of chili any longer. If I continued, I would vomit until the baby, whom I suspected was a boy due to his sense of entitlement, dried up in my womb. But how could I explain this? Instead I said, “I am not hungry.” In fact, I was hungrier than I had ever been in Kaoshiung.

The section with William and Gillian, their parents dead, coming to their fate as tong yang xi, is reminiscent of Jean Cocteau’s Les Enfants Terribles, or more specifically the media it has inspired, including Gilbert Adair’s The Holy Innocents and Bernardo Bertolucci’s film The Dreamers. In all cases, strangers puncture the world of the siblings enjoying their furiously enmeshed incestuous relationship, intrigued and reviled, wondering for a second if they have not gotten it right by hiding from the world and making each other’s problems the only problems, the biggest problems. This section takes place in 1972, in Nixon’s America, when historically low voter turnout kept him in the White House. Dates are given, fixing the characters in a specific American landscape, but after the catastrophe of the world wars, which take their toll on David’s family’s piano business, nothing gets in.

By this point, William and Gillian do not need cultural expectations to demarcate the borders of the place they ought to be. They are lost in their own paradise. The novel’s borders isolate the voices of the Nowak and Orlich families, the stark differences between them unmistakable, the potential for them to find paradise in one another impossible. Wang is working with such incandescent equipment as a writer, and the ambition that informs The Border of Paradise is exhilarating. Her perspective is vital, and the innovative way she applies that perspective with this novel should be recognized.