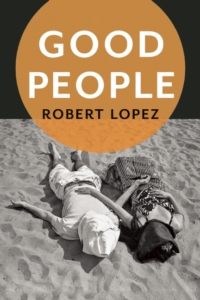 In Robert Lopez’s collection of short stories, Good People, the narrators are affected by malaise so paralyzing that it has become a terminal condition. There is the sense that they are no longer participants in daily living and they have been institutionalized, ostracized, or otherwise confined in solitude. They are condemned to marginal lives, either because of lack of self-awareness or their acceptance of a hostile world.

These are stories whose art depends on the selective exclusion of detail. The protagonist of the elliptical story “Goodnight Maybe Forever” prepares to hang himself and narrates something of a suicide note: “I’ve been planning to hang myself for a while now. Countless others have done likewise and I’m no different, not by any measure. I have, over the years, been badly beaten.” “Goodnight,” like many of these narratives, obsessively revisits earlier traumas. These circular stories are never organized into tidy sequences of events. Rather, they collect data around certain catastrophic experiences that remain nebulous and unknowable.

Teasingly, Lopez allows us to glimpse the outlines but often the heart of the business remains withheld. For instance, the narrator of “Essentials” deliberates over which of the participants to include in her account of an incident at a party. Before we may know the nature of the event, the story concludes with the narrator in the midst of an interrogation by two police officers. In this way, implicit in the monologue form, our limited understanding of these incidents (and their manic narrators) is gathered piecewise as if by hearsay. The traumas about which these narrators centripetally revolve are no different from voids papered over by self-pity, justification, and deflection. No doubt Lopez would agree with Rilke’s claim that “shattered people are best represented by bits and pieces.”

One issue with these narratives is that often the stakes have been lowered to such an extent that, especially truncated as they are, some never achieve much beyond intriguing character sketches of pathology. For instance, the playful “Essentials” remains an exercise in his highly oblique style, a story in which the author’s penchant for omission seems fetishistic. Other less successful pieces have all the usual character listlessness and apathy on display but theatrically carry their obsessions to their ends without the suggestion of any deeper significance. These become tiring experiments that are too self-involved, more concerned with the comic repercussions of certain sexual predilections than the enlargement of our understanding their marginality.

The more compelling “Good People,” framed by a conversation between two coworkers, is one of the few instances when we are not trapped in the neurotic mind. Instead, while each man guesses at the other’s thinking, the author discloses their private fantasies. One of them, a compliant office worker, “bored with everything,” visits transsexual prostitutes and dreams of committing unmentionable crimes. His married coworker consistently spies on his own wife undressing from underneath the bathroom door and carries on a casual sexual relationship with a salesgirl at the office. For both, the reprieve from inertia is represented by the transgression of sexual and moral boundaries. For the former, virginal, menaced by the slightest social interaction, such behaviors may offer excitement: he doesn’t tell his mother “that he’d visited two transsexual prostitutes during lunch breaks, doesn’t tell her that they’ve touched him and that he wants to do it again.”

Still, his interior life remains obscure. His coworker looks “for an indication from the other one, something that would telegraph his intentions.” The married man is made more transparent: he is suspicious of his appointed role as husband and for the most part disenchanted by his marriage. We confidently read his infidelity as a reaction to emasculation at the hands of his wife: “Before, when he was single, he would go to a store only if it was absolutely necessary. Now he lives in them. He tells his friends that it’s awful, that it’s the death of some essential part of himself, but he does not actually mind. He knows he has to do something. He is a man.” He is typical of Lopez’s narrators in that he doggedly seeks proof of his masculinity. It is true that the married man is suspicious of his coworker’s enervated manhood, but what disturbs him most is the other’s inscrutability. Even his own wife disturbs him: he can hardly predict her reaction to his uncertainty about having children. It is when their surroundings are felt to be unintelligible that these narrators understand themselves to be alone.

The tragedy in these stories is found in the futility in which these maimed creatures struggle to overcome their loneliness. In “Big People Everywhere,” a frequent visitor of massage parlors misinterprets the innocuous signs of a married neighbor. He hardly cares to admit the failed connection: “I’m not sure what this proves, if anything. Maybe this is an example of me being good, or maybe it exemplifies something else.” So the expectation of disappointment in his endeavors for any intimacy generates in him a resignation to a life drifting between brief carnal pleasures. In the farcical “A Regular Day for Real People,” the jaded narrator kidnaps a friend in order to bully his sister into a high-stakes tennis match. In “Welcome to Someplace Like Piscataway,” a poker player, wedded to a foreign woman just met a casino table, recounts the nature of his estrangement from his sister.

This is a collection that religiously conforms to the belief that form must mirror the instability of the narrator’s mental state. It is a consequence that some of the characters seem impenetrable and at risk of remaining lifeless on the page. One thinks of these men as anesthetized, each desperately after intense emotional experiences. Though they have been defeated, almost all of them wistful for their unrecoverable pasts, those not completely inaccessible remain somewhat heroic and somewhat human in their doomed projects at recovery.