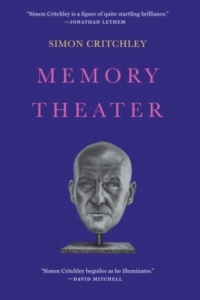 Simon Critchley’s Memory Theater, published in the United Kingdom in 2014 and now published in the United States by Other Press, is a riddle of a novella, one that offers a host of questions and few answers. The protagonist is a philosophy professor named Simon Critchley, who has essentially the same resume and biography of the author, the first of several bluffs and blinds. The plot is simple, even if the ideas it addresses are complex; Critchley discovers, in the papers of a dead colleague, charts that organize major and minor details about a series of philosophers’ lives, and among them one about himself that seems to predict his death. Upon closer inspection, he discovers that these documents are unerringly accurate concerning events that occur long after their creator’s demise; the rest of the novella describes how Critchley copes with the fact that he will die on June 13, 2010, at 3:51 P.M., in the Dutch city of Den Bosch.

Of course, Critchley survives, for he goes on to write the book the reader has before them, so the charts are in a sense a McGuffin, the means by which Critchley the author can smuggle in the ideas upon which the story is built. The memory maps are the outgrowth of his colleague’s work on interpreting Hegel’s Phenomenology of Spirit as a memory theater, a device that can be used to attain a total recall of human memory. The idea of a memory theater is inspired by and explained in The Art of Memory, a 1966 book by the art historian Frances Yates.

Critchley summarizes Yates’s book with admirable ease, and presents the evolution of mnemotechnic systems, from Plato’s time up to the Renaissance and beyond, with the fluency one would expect from a professor of philosophy. The beginning of the novella can at times take on the aura of a lecture, and while many readers might be put off by the prospect of a flurry of allusions to philosophers, theologians, writers and poets, it is a little like being served an artfully composed salad to precede a steak — it is good for you, and sets the scene.

There are two existential dilemmas presented by the text. The first is the extent to which memory makes up a man; the narrator reveals during his discourse on the memory theater that he suffers from memory loss associated with past trauma, an accident in a machine shop that crushed his hand. The second is the extent to which knowing the exact time of one’s death will affect the time one has left. The two concerns become mixed up as the novella proceeds and the narrator continues to go about his life, albeit anxiously, as he acknowledges with a distant horror that he is fulfilling the prophecies contained within his death chart. Then, he receives a package sent posthumously by the creator of the charts, which contains a manqué of a memory theater drawn up according to the designs of Giulio Camillo. Upon receiving this package, Critchley immediately begins to go mad, a madness that evolves into a monomaniacal quest to build a full-scale replica of the manqué to pursue the total memory recall promised by the idea of a memory theater, just in time for the appointed hour of his death.

The two dilemmas are resolved, as it were, simultaneously, and it is a testament to the care with which Critchley has organized the ideas in the book that when they all fall into place in the conclusion, the reader is left with few answers and a number of tantalizing questions. The most important of these questions, perhaps, is how successful the book is as a work of fiction. The prose, on the whole, is mostly workmanlike, with flashes of self-deprecating humor. The only glaring problem with it is that Critchley at times shows he is capable of a more lyrical mode, such as in a dream sequence in which he flies through a Gothic cathedral packed with nightmare visions straight out of the mind of Hieronymous Bosch; or when, after listening to a shipping forecast on the radio, Critchley produces lines whose rhythmic resonances echo the character’s frame of mind and mirror his mood:

Moderate or good, occasionally poor. Poor, becoming moderate. I lay in the steaming water and mouthed the other regions of the sea: South Iceland, Biscay, Fitzroy, Trafalgar. Bliss. It was an incantatory memory poem. Recall the sea and retain the land. Jede Englander is ein Insel. Appropriately enough, the late-night forecast was always followed by the national anthem. The islands were safe. We could all rest.

Conceptually, it is tempting to see the work as a fictionalization of a philosophical puzzle, or a slim and spare fiction that answers a “what if?” posed by a philosophical premise, both of which would warrant a hearty “who cares?” in answer to the question of the book’s success. Neither of these interpretations does the work justice. The way Critchley balances the many uncertainties he introduces in the text — through the narrator’s flawed memory, his cresting insanity, his alternation of past and present, and his ultimate failure and cluelessness — against the philosophical backdrop suggest that the book is a far more slippery creation.

Perhaps the one certainty about the book is that its fundamental focus is not memory, nor philosophy, but death. Critchley (the author) is a founding member, along with the novelist Tom McCarthy, of the International Necronautical Society, a semi-fictitious organization whose manifesto declares “That death is a type of space, which we intend to map, enter, colonise and, eventually, inhabit” and that “there is no beauty without death, its immanence.” The narrator of the book refers mysteriously to his “necronautical activities” and says, in the “glossary of potential obscurities” in the back of the book, that the members of the I.N.S. are “legion.” It is the immanence of death that the protagonist struggles with, from the opening lines (“I was dying. That much was certain. The rest is fiction.”) until the end, where he embarks on a project to construct an impossible work of art that fulfills the promise of the memory theater. In this context, the book might fundamentally be a cautionary tale, warning the reader against a fear of death so totalizing as to preclude any normal human activity.

Yet of more interest, at least to this reader, is what the book implies about literature and fiction. It is clear by the end that there is no perfect memory theater or memory machine, that the protagonist’s attempt to create a perfect work of art is a fool’s errand, but there are hints that a single work of literature has come close. It is significant, particularly in the current age, that the most extended interaction the protagonist has with a computer is during the height of his madness, and he believes that it is attacking him. The computer, and by extension the Internet, would at first seem to be the perfect physical manifestation of a memory machine, yet the possibility is never raised. Critchley does note “Socrates’ denunciation of writing as form of artificial, external memory,” which could be extended to a hard drive, perhaps, but the protagonist ends up finding solace in, of all things, Ulysses, and uses Bloom’s walk through Dublin to explain how cities could be viewed as vast memory theaters all on their own.

It is this idea of a city explored through literature as a memory theater, a fiction that can withstand an examination similar to Critchley’s colleague’s treatment of The Phenomenology of Spirit, that indicates the high regard he has for fiction, and explains why he chose fiction for this specific project. It should be noted that while this is not Critchley’s first book, it is his first foray into fiction, and it is remarkable that, for all his clarity in explaining philosophical concepts, he is also so adept at the use of ambiguity to create an aura of mystery that invites speculation long after the book is done. Perhaps it is because the clarity philosophy can provide only serves to heighten the little truths ambiguity can root out, which is, in the end, the special province of fiction. It will be interesting to see what Critchley finds there in the future.

Adrenochrome Supplements for the Postmodern Condition