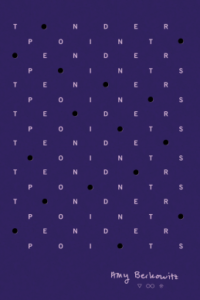 What do you call an illness of indeterminate cause that primarily affects women and for which there is no cure? Historically we’ve referred to such afflictions as hysteria, chalked it up to overstimulated nerves and weak constitutions. We’ve still not done near enough to understand or measure women’s pains in the traditional medical sense, relegating them instead to the psychology of emotion and denying the direct relationship of that to physical health . . . and that’s when we can be persuaded to believe they exist at all. In one highly contested view, the singular diagnosis under which many women’s myriad ailments are now messily lumped together is fibromyalgia, “an invisible illness with uncertain causes and imprecise diagnostic criteria . . . largely defined by its mystery.”

In Tender Points, Amy Berkowitz wields short form prose like a hammer, carefully but forcefully pounding away at layers of personal experience to uncover her resilient core in spite of our culture’s hypocrisy about authority, power, and pain. With wit and grace she describes her own experiences of sleep loss, of muscular hurt and trauma, and the restrictions these have placed on her daily life. She details her experience of being prodded and poked, of having at least 11 of 18 “tender points” on her body identified, warranting a diagnosis of fibromyalgia. She reads that the illness which leaves her constantly aching and fatigued results from over-activation of the fight-or-flight response housed in the nervous system, one which makes it hard to reach REM and interferes with hormone release, leading ultimately to muscle pain. But she can not ignore the fact that the pain started immediately after the resurgence of a formerly repressed memory, one in which she is a child alone with her doctor and her doctor is raping her.

How perfectly cruel, then, that those with the power to diagnose her and explain away her pain are doctors, most of hers men, the same class of person to which her rapist belonged. How hypocritically sadistic, then, that one whom she consults about vulvodynia (vaginal pain) suggests she attack it by surgically removing the nerves that feel it, as if the feeling of invisible, unexplainable pain must be its own causal indictment or signify its origin. There are few clearer reflected images of society’s victim-blaming tendency. It’s no wonder, then, that Berkowitz is able to relay the particulars of her story yet proclaim so simply that “I’m writing about the violence of patriarchal culture” with both ease and conviction.

In referencing popular blog posts, musicians (most notably Kathleen Hannah of Bikini Kill, Le Tigre and The Julie Ruin), and pop culture phenomena like the TV show Twin Peaks, Berkowitz pulls from far and wide to explain her frustration about who lays claim not only to power but to pain, who gets to name it and who is believed when they speak to it. That, and how shameful it is that the experience of sexual violence be one of the most persistent ties between women; how much more time we might spend conversing and sharing about art, literature, science and sport were it not for rape and other forms of abuse.

In this short but expansive book which reads sometimes like poetry, sometimes like philosophy, and always like resistance, Berkowitz encourages us to become authoritative about our own experiences. With necessary rage and introspection, she urges us to understand our personal, physical, and emotional pain not only as our own, but as incompletely distinct from that of culture at large. Pain may be literal, localized, explainable: a broken arm. It may be everywhere, always, unknowable: a feeling. But it is only all the more real because expressive, or symptomatic, of our surroundings. This assertion comes through with confidence, powerfully, and is bound to leave us wondering at the stinging in and around our own tender points.