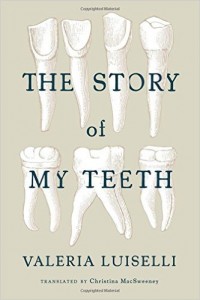 The art business features with conspicuous regularity in some of the acclaimed literary fiction that has emanated from the United States over the past couple of years. Rachel Kushner’s The Flamethrowers (2013) told the tale of a young Nevadan woman’s journey into the heart of the New York art world. The protagonist in Ben Lerner’s 10:04 (2015), pays a visit to an Institute for Totalled Art, an exhibition dedicated to artworks damaged in transit — a none-too-subtle commentary on the fickleness of value and meaning in art, all the more pointed for appearing in a novel replete with reflexive, self-ironizing gestures. In a similar vein, the latest book by Valeria Luiselli, The Story of My Teeth, is a jovial little tale about an auctioneer who has sussed out the secret of success, that if you attach a good story to a piece of tat, people will pay good money for it. Again, the allegorical connotation hardly needs elucidating: This is a story not about teeth but about the process of cultural production, and the constructed and chimerical nature of narrative itself.

The New York connection might have something to do with it. Though they hail from different parts of America, all three of these authors are New Yorkers, so one supposes that the art scene would loom large in their respective milieus. Geography aside, it is entirely understandable that a novelist might take an interest in the lot of the artist. Writers and artists have certain dreary habits in common, among them a certain beleaguered preoccupation with their own relevance. The art critic David Hickey’s oft-quoted remark about painting, that it “isn’t dead except as a major art” and would persist as “a discourse of adepts, like jazz,” was echoed in a 2014 article by the British novelist Will Self, who observed that “the literary novel as an art work and a narrative art form central to our culture is indeed dying before our eyes,” but maintained that it would survive “as an art form on a par with easel painting or classical music: confined to a defined social and demographic group, requiring a degree of subsidy, a subject for historical scholarship rather than public discourse.”

The recent proliferation of so-called “autofictions” — novels, such as those by Lerner, Sheila Heti, Karl Ove Knausgaard, in which the autobiographical and the fictive are mischievously intertwined — suggests an attempt to embrace this very quandary. (This is not by any means a new phenomenon: The canon of modern fiction abounds with embedded autobiography — think Proust or Bellow, to name just two of the more obvious examples. But in its contemporary iterations there is arguably a more pronounced sense of wantonness, of the subversive gesture as an end in itself.) The Story of My Teeth, though superficially quite different, arguably belongs in this company. On the face of it, there is little autofiction here: Luiselli’s protagonist is not Valeria herself but a man called Gustavo, who goes by the name of Highway; the story makes little claim to realism, a skittishly absurdist farce about selling molars to affluent collectors in a Mexican church. And yet it has, all the same, something of the feel of an autofiction, so pronounced is the pastiche, so brazen the satirical flaunting of liberal arts touchstones. The author looms ecliplitcally large; the work is every bit as autobiographically earnest as any brooding introspection. The Story of My Teeth crams into its 150 brief pages a plethora of allusions — classical, philosophical, literary, and 1960s pop cultural. Highway sells teeth that once belonged to Rousseau, G.K. Chesterton, Montaigne, and Virginia Woolf; he has an uncle called Marcelo Sanchez Proust and a cousin Juan Pablo Sanchez Sartre; we encounter, briefly, a security guard called HoChiMin. Though there is enough humor and exuberance to keep it from being insufferably academic — a hilarious rumination about morning erections is a particular highlight — this is storytelling very much in the art-school-prank mold. Luiselli is winking at us the whole way through. At one point, Highway encounters a frustrated writer who laments that:

There are already too many things . . . too many books, too many opinions. Anything I do will only add to the great pile of trash every person leaves behind. Am I making sense?

He is. She is. But it does rather beg the question: At what point does this kind of thing (a) overreach satire into self-indulgent navel-gazing and (b) become boring and repetitious? The Story of My Teeth sets out to make you think about the nature of authorship and meaning, and it cannot but succeed in that modest aim. I daresay if I were to fall into the trap of remonstrating that it is not really a novel — but, rather, a sort of fabulatory jam session that has found its way, by some happy accident, to being printed and bound and distributed and displayed on the shelves of purveyors of fiction — I would be frittering energy on a moot quibble. It doesn’t, I suppose, really matter what we call it.

Indeed, Luiselli is quite candid on this point. Where Lerner and Heti made fictions of their writer selves, Luiselli has taken things a stage further by actually crowdsourcing the composition of this work: An appendix to the The Story of My Teeth reveals that some of its vignettes had been written by Mexican factory workers who were invited to contribute to the novel. For this reason, and because the book also features a graphic timeline contributed by her translator, Christina MacSweeney, Luiselli calls this text a “collective ‘novel-essay.’” One is reminded of the dust jacket of the US edition of Tom McCarthy’s novel Satin Island, published earlier this year and similarly fixated on questions of authorship and narrative: The words “a manifesto,” “a confession,” “a report,” “a treatise” and “an essay” appear crossed out, before the artist settles on the subtitular “a novel,” in a playful allusion to the dubiousness of its taxonomic status.

This is all good, clean, victimless fun. Here, though, is the trouble with in-jokes generally: They are pretty dull if you’re not in the gang and are not au fait with its argot. Has this book — and others like it — been written principally for other writers, or for the wider community of readers? (Besides which, there is the awkward question of Why. If you have something to say about fiction, non-fiction — i.e., literary criticism — remains by far the more congenial medium for communicating it.) Valeria Luiselli has written a smart, whimsical, and thought-provoking text-thing. But the wider current to which this book belongs probably cannot sustain many more publications of this type without incurring some sort of backlash. It appears increasingly to be an altogether rarefied pursuit, a kind of collective Creative Writing self-help bubble that threatens, with its eloquent narcissism, to bear out the gloomiest predictions of literature’s marginalization.