The Collapse of the Ancien in Thailand 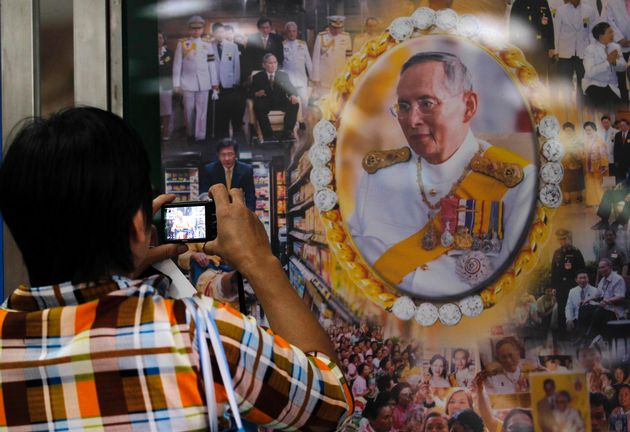 In April of last year Thailand was going to the polls, and on election day two friends and I flew to Bangkok and took a cab to a park in the new city. The park had become the center of a political protest that on occasion, it was reported, threatened to shut down the entire city. At the time it was mostly confined to the park. The driver seemed not to understand our interest in protest tourism; he deposited us a block away. A week before in Cambodia (my friends and I were on a short regional tour) a stoned New Zealander warned us that Bangkok was a war zone. “Like Syria,” she said. None of us had a very clear idea of what Syria looked like, and in Bangkok, instead of finding a war zone we happened upon a Zumba class. The park sprawled with rows of tents, bathrooms spilling over with people, stalls selling kitsch with the King’s face emblazoned. Many people sported yellow: the color of the royals. Others seemed more negatively oriented: a banner railing against recent privatizations unfurled down from the side of the overpass just beyond the protest’s main stage.

On the main stage, at first, lectures were being conducted in Thai. Then a group of spandexed fitness freaks ascended, commandeered the microphone, addressed the crowd in English, and uprooted everyone from their picnic-style spots on the ground. The protestors were all at least 40 and were very enthusiastic about Zumba. They shook, they lurched, they twirled, they chanted, they laughed, and occasionally they deadpanned. It was one of the happiest, sweetest moments I’ve ever been slightly a part of, and after a few minutes my friends and I decided to go get coffee.

It was difficult, during that brief historical moment a little over a year ago, to feel anything but ambivalence when examining the current round of global political protests. The various European anti-austerity demonstrations had quieted down; the marches and direct actions in America, in the wake of Ferguson and the murder of Eric Garner, had not yet begun; the summer uprisings in Turkey and Brazil had been silenced for a semester. Instead the headlines obsessed over Ukraine, with marginal notes on Thailand. Russian nationalism versus European neoliberalism: the options weren’t ideal. In Thailand the situation seemed similarly designed to preclude the possibility of identification with anything. The apparent options there, framed indelicately, remain old guard versus new, capital versus the King, city versus country.

Thaksin Shinawatra, Thailand’s prime minister from 2001–2006, was born in a village in the northern province of Chiang Mai. His father’s family came to Thailand from southern China and proved their worth in business, beginning as cattle traders and graduating to silk, until Thaksin’s father vaulted mid-century into further industries. He owned a café, orchards, two movie theaters, a gas station and a car dealership. He grew rich. Thaksin inherited money, became a police officer, and like his father cobbled together a diverse constellation of businesses, all of which failed. He then quit the police. He launched new business ventures and this time had success: he became a wildly prosperous telecom tycoon. Then, as tycoons sometimes do, he entered politics.

What followed, as Kesian Tejapira argues in a 2007 New Left Review article, was a Thaksin administration that consolidated Thai political power under the direct management of capital. Government for capital, by capital, and led with ostentatious smugness by a man who styled himself as Thailand’s CEO. “Capitalism,” Thaksin once said, slipping into stationary, mystical, just-back-from-the-retreat Silicon-speak, “needs capital, without which there is no capitalism.” His speeches pitched a worldly, fat Buddhism, swaggering between religion and money. Thailand’s growth rates zipped along at 7 percent.

During the earlier boom years, extending from the ’80s through much of the ’90s, the state’s entrenched old guard looked after big capital’s interests, presiding over a wave of globalization that broke disastrously in 1997. Post-crash, certain capitalists grew impatient with the bureaucrats and seized power for themselves. Thaksin’s regime pushed through all the corrupt deals and stripping away of the state one might expect from the marriage of money and government, but matched it with something more politically stunning. From its inception, Thai democracy meant a vote-buying patronage system, mostly performed in the populous, agrarian north. Now the rural north was being absorbed legitimately into the democratic fold. Thaksin won over poor farmers not through fleeting election season bribes, but through policy: subsidies and microloans that, by some measures, helped reduce poverty in the country by half. A new politics emerged: democracy in the countryside, oligarch capitalism in the cities. But this kind of division frames too neatly a blurred and interwoven political scene. Financial speculation, according to a survey cited by Tejapira, left 500,000 farmers landless, transformed into people who sell their labor, if no longer their votes, in a money economy they previously lined the margins of.

If power had gone to the capitalists, or to a few capitalists, it had been wrested from the old elite and its appendages: the King, the military, and the state bureaucracy, which Thaksin had trimmed in corporate fad diet style. Add in the urban working class, whose stability turned precarious after neoliberal trade agreements, privatizations, and the reallocation of money to the provinces, and suddenly there’s a protest movement. The Palace began issuing agit-prop innuendo, protests and counter-protests mirrored each other like Groucho in front of Harpo, and in 2006 the military pulled a coup. Now Thaksin lives in Dubai, fleeing corruption charges.

The military junta tried returning to democracy, but quickly realized it couldn’t prop up the old guard: a new round of elections slotted Thaksin’s sister as prime minister. My first time in Bangkok, walking through the park on election day, the Zumba classes were charged with an anti-Thaksin and family fervor. The impression was of a fading order, not without its own clamorous, King-blandishing support base, that nevertheless had become exhausted by a democratic system skewed toward rural voters in the north.

The old regime has since decided to cling on by rejecting democracy; a month or two after I left, Yingluck Shinawatra, Thaksin’s sister, was likewise removed from office by the military. I have the sense globally that such authoritarian turns aren’t retrograde anymore, that they have perhaps as much claim to the future as democracy. But in Thailand’s case the old guard really seems doddering. The King, revered with enough unanimity to hold together a disparate anti-Thaksin protest movement, is dying. He plays the jazz sax, the trumpet, the piano, the clarinet, and the guitar; has terrible depth perception but has still won a gold medal for sailing on the international circuit; designs boats; paints; composes; wrote a biography of his dog, an allegorical work on proper social protocol, which instantly sold out; has his picture everywhere, from 7-11 to huge, flowering roadside shrines; possesses multiple patents, one for a waste water aerator; and now has spent much of the past few years checking in and out of the hospital. His son has been divorced twice, was caught partying scandalously on a boat (celebrating, by the way, his own dog’s birthday), and was accused by a top Singaporean official, in a Wikileaks cable, of having a gambling addiction bankrolled by Thaksin himself. He is markedly less popular and is next in line for the throne; hence the impression of a drooping ancien order, rollicking in perplexed desperation toward an inevitable collapse.

I returned to Thailand this past December. The King had just had his birthday and his face was even more omnipresent. Tuk-tuks flew yellow, royalist flags, the protests had vanished, and the city’s surface was barraged by a yellow storm of invented harmony. Happy Thailand, ruled by a military junta, and happy birthday, even as everyone worried over the King’s health, the grindingly slowed economy (now 1.5 percent growth), and over what might happen next. For my part, when thinking about the next act, and about the royal drama revolving around Thaksin and the prince, I couldn’t lose the image of Falstaff and Prince Hal. It’s not a precise, allegorical fit, but imagining an alternate ending to Henry IV, Part 2 — where King Henry still dies, Prince Hal still ascends, and then doesn’t reject but actually sweeps Falstaff to power alongside him — conveys one of Marx’s maxims that might become a fitting description, before too long, of the fate of Thailand’s aging military-Palace alliance. First as tragedy, then as farce.

My Milo Is Bad