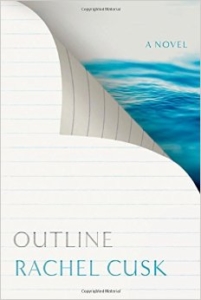 I would identify as a quick reader, but reading Outline took me a very long time. The first half of the book I read with the sensitivity Rachel Cusk seems to expect of her readers: underlining sections I felt would contain more meaning the second (or nth) time one reads them. The other half I read in one night, to finish the book before I needed to review it. Overall, while I am very unlikely to reread this novel, I do not think it is unworthy of reading; I just really hate feeling like the intended audience of what seems to be a manifesto to giving up on the idea of fiction.

In a conventional way nothing really happens in Rachel Cusk’s Outline. The title, in that sense, does a great job at encapsulating a work that does a larger service to the voice of the writer than it does to correcting the problem of modern fiction: writing for writers. Rather than trying to appeal to a broader readership through genuinely empathizing with people different from herself, Cusk takes notes that would seem intimately familiar primarily to those who are unhappily finding themselves in literary circles/publishing/academia/book reviewing.

In chapter 9 (or “IX” as it is currently titled because WHO THE FUCK CARES ABOUT CHAPTER TITLES ANYMORE, MAN!), the narrator finds herself teaching writing in Athens, Greece. The narrator assigns her students to write a story incorporating an animal, and we are presented with some of the ways in which the students dealt with the assignment. In the classroom, a rather telling creative belief is given by a student, Georgiou:

It was interesting to consider, Georgiou said, that the role of the artist might merely be that of recording sequences, such as a computer could one day be programmed to do. Even the question of personal style could presumably be broken down as sequential, from a finite number of alternatives. He sometimes wondered whether a computer would be invented that was influenced by its own enormous knowledge. It would be very interesting, he said, to meet such a computer. But he sensed that any system of representation could be undone simply by the violation of its own rules.

To create smoothly-constructed narratives within narratives in the Proustian tradition is always formidable, but that is not what Cusk has done here. The message of Georgiou’s suggestion lies in how closely it resembles the core ontological aspect of Cusk’s book. For its creation, the artist did merely record sentences. The artist also chose to primarily present the sequential nature of writing, her content being observed stories, her personal style being expressed most accurately in brief criticisms of form and her contemplation of them with the distant clarity found in compositions.

Putting together a bricolage of situational connections that indirectly push readers to focus on the highs and lows of the life of a narrator who seems to share a tad too much with the author, Cusk’s decision to categorize her project as “Fiction,” strikes me as a move her very own narrator would consider a disservice to her creative responsibility, as a writer. Cusk has brought together various events, seemingly of no extraordinary significance, but linking them through stylistic tone. Never letting go of the writerly adroitness that gives the book its most refreshing quality, it is the narrator’s wit that gives some edge to an otherwise anticipated product of its time. In ten distinct ‘conversations,’ the project follows a writing teacher who observes her circumstances with the disdainful gratitude her position demands. This “following” of the ten episodes is vital: rarely does Cusk’s narrator appear to take charge and create her stories; instead, her stories happen to her, and her narration strives to provide objective observations.

Many themes recur through Outline: family and disappointment, money and disappointment, love and disappointment. When she does not seem too bitter, the narrator manages to be playful in the Lydia Davis manner that could have redeemed many a narrative. But with a much looser sense of diction and brevity than recent Davis, the result is simply a quiet statement on form.

There is something meaningful in the concept of silence and refusing to make grand statements in writing, and that is the biggest success of Cusk’s “novel,” which reads as the cerebrally-tuned notebook of what is an unapologetically “based on real life” narrator. But for this meaning — and Cusk’s intentionality to be truly effective — knowledge of the current literary condition is a prerequisite.

Being Greek, I immediately noticed a tricky thing about how the names of some of the students were introduced: Georgiou, Christos, Paniotis. The first is a last name, the second a first name and the third is — flat-out — a misspelled first name, which should be “Panagiotis.” Of course, such factual details may appear unimportant, but what they make evident is the immense subjectivity of Cusk’s (or her stand-in narrator’s) reality: even while trying to strip off all artifice she created another suspect universe. Unfortunately, Cusk’s fictional microcosm was not built with the crafty passion of a good liar, but is driven by the urgency to seek truth amidst the constraints observed by a protagonist whose backbone is not always her prominent feature.

I remember being drawn to metafictional conceits in which the writer orchestrated a playful narrative and contemplated the realness of her fictional self. Flirting with the readers’ tendency to assume fictional protagonists serve as stand-ins for the writers, the best of these narratives allow readers to forget the limitations of what they ought consider a fact and heed the looseness the phantastical enables.

The first time that one encounters this variety of creativity, a new danger is introduced: the effect that its replicas will have will not feel equally climactic. Cusk cannot measure up to the canon of postmodern metafiction (i.e., Renata Adler), because her — that is, our, too — literary context calls for more.

Cusk’s book embodies somewhat a current demi-experimentalish trend in attempting to take realism to its limits. Is writing for writers always bad, even if it is not overdetermined philosophically or academically? Lethem’s Gun, with Occasional Music would imply so. Placing such an emphasis on realism without giving much regard to plot, traditional narrative structures, or at the very least providing the sense of finitude which stories have historically offered readers is not a brave nor radical progression for fiction.

Cusk’s Outline can only seem radical to someone who has not been exposed to this hybrid fiction/non-fiction genre before. It is a pity that a writer of Cusk’s caliber refuses to genuinely attempt producing empathetic fiction. Her narrator simulated a similar conundrum of questioning her purpose while trying to define success, at one point declaring: “Success takes you away from what you know.” Perhaps that was a fiction, but even imagining Outline with a heroine in the Muriel Spark tradition looms fresher, because the question of realness would be set aside for the fiction to be enjoyed. Of course, the “problem” is that books being written today need to respond to market needs, and if the reading audience is more interested in projects leaning toward a confessional, non-fictional nature, Cusk’s Outline has to be perceived as less of a disappointment and more as a criticism of today’s writing reality. Cusk understands all that is wrong, but the most her work can do is bring our attention to those limitations.

Journalists might be writers, but writers are not journalists, at least not by definition.

Elias Tezapsidis is a generalist writer and an aspiring human being based on Avenue D. His work can be found in 3:AM Magazine, The Awl, Berfrois, BOMB, Harper’s (fine, the website only!), HTMLGiant, Salt Artists, Thought Catalog, The Millions, Publishers Weekly, The Toast, Vol1 Brooklyn, V Magazine, and on twitter.