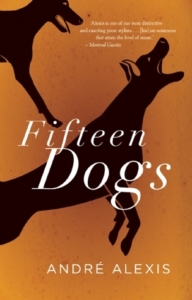 And he asks me
with both eyes:
why is it daytime? why does night always fall?
why does the spring bring
nothing
in its basket
for wandering dogs
but useless flowers,
flowers and more flowers?
This is how the dog
asks questions
and I do not reply.

“What is my dog thinking?” is a question probably everyone who has ever had a dog has asked themselves. The related question, “why do dog owners spend so much time thinking about their dogs?” has probably been asked by everyone else. André Alexis’s Fifteen Dogs hints at both answers, but is probably more concerned with a more difficult question: What does it mean to think at all?

First, Alexis introduces the novel’s improbably charming premise that fifteen dogs are granted “human intelligence.” The Greek Gods Apollo and Hermes are drinking at a bar in Toronto, Canada, and, bored, construct a wager as to whether an animal would be even less happy than a human if given human intelligence, to be measured at the moment of death. Since, in order to win, Hermes needs only one dog, of the divinely endowed fifteen, to die happy the wager is revealed to be more grim than proposed: Is it possible to die happy at all? They proceed to grant the dogs “intelligence,” and the bet is on.

The moment of death is of particular significance, especially in the caprices of the Greek Gods. In the final scene of Sophocles’s Oedipus Rex, the chorus chants that no man can count as happy until he is dead. Or dog, in Alexis’s case, and perhaps Greek Tragedy sets the tone of this book. Although the subject matter has the potential to be precious, the story, like most wagers of the Gods, tends to caprice and, often, even cruelty. Moreover, the structure of the bet essentially requires that 14 dogs have to die unhappy for there to be any contest at all. One can then expect echoes of Daniel Handler’s A Series of Unfortunate Events.

Alexis’s heart stays close to his classical inspiration. The leader of the dog pack is named Atticus (literally, man of Attica, the region around Athens), the namesake of the Platonist philosopher with very strict notions of heresy and correctness. That’s a profound and dangerous mixture in a bull mastiff, and so he is. Other dogs behave with the arrogance of Agamemnon, the violence of Ajax, or the cunning of Odysseus (and certainly the loyalty of Argus). Parallels can also be made to Tithonus, blessed in his youth with eternal life, and but not eternal youth, and to Tireseas, given the ability to understand birdsong, and an unnaturally long life, at the cost of his sight. Tiresias dies after drinking water from the tainted spring Tilphussa, and more than a few of the dogs die poisoned, or torn to pieces like Pentheus in the Bacchae, nudged by forces both divine and canine. Though none of these parallels is ever made explicitly, Fifteen Dogs belongs to the Homeric Epic tradition of pitting mortals against gods and fate. Death comes to us all, except for the gods who wager on it.

He could no more understand what it was to live with death than they could what it was to exist without it. It was this difference that fascinated him; it was at the heart of the gods’ secret love for mortals.

Although the stakes are clear, it is unclear what is really meant by the gift of “human intelligence,” which is no monolithic thing. The dogs learn to work the latches on their cages, but they rarely do anything you couldn’t find a dog already doing on YouTube. Some of the dogs are rather gullible — probably even less intelligent, in many ways, than dogs we know (Poodles, however, are always very smart). Granted, YouTube also provides evidence that human intelligence permits an endless variety of bad decisions.

Most significantly, Alexis’s premise does not suggest that dogs suddenly have the ability to talk to humans, Dr. Doolittle-style; most of them never learn to speak English or any human language. The dogs learn to talk to each other, in a language invented and understood only by dogs with human-level intelligence. For the most part, they communicate less successfully with humans than ordinary dogs do (certainly much worse than Neruda’s). But these aren’t super-smart dogs, per se; rather they are dogs with human intelligence, which crowds out the dog intelligence. They communicate with humans, and each other, fitfully, and sometimes misunderstanding mingles with resentment (is your cab driver in Paris lost because he does not understand your poor French, or does he just hate your patronizing tone?). Do they even aspire to understand humans, each other, or themselves? Language gives the dogs the ability to think — the capacity for self-awareness — and it is not always wasted.

In drawing attention to their difficulty, Alexis takes up notions of language and consciousness on a fundamental level, and what it means to have both or one without the other. The following two excerpts respectively comment on each:

He was amazed, for instance, to hear a woman say to the man beside her

her words an attempt to comfort and wound at the same time. How complex and vicious humans were! And how strange to suddenly appreciate the depths of their feelings. Whereas previously, he had thought them stunted, clumsy, and unwilling to grasp the obvious, [he] now realized humans were almost as deep as dogs, though in their own particular way.

What, he wondered, did it mean to be human? . . . What would it be like . . . to be unable to distinguish the smell of snow in winter from the smell of snow in early spring? . . . And, of course, it was impossible to know a state . . . by subtracting things in oneself, as if ‘human’ were what is left once the best of a dog has been taken away.

Finally, to be conscious of language itself, and the opportunity it presents:

[O]ne of his last poems returned to him. He heard it in his mind as if someone were reciting it, almost as if it were not his at all. At that exact moment it struck him again how beautiful his language was . . . how wonderful that he had been allowed to know it as deeply as he had. And so it occurred to [him] that he had been given a great gift. More: it was a gift that could not be destroyed. Somewhere, within some other being, his beautiful language existed as a possibility, perhaps as a seed. It would flower again. He was certain of it and the certainty was wonderful.

For Alexis, language is the lens by which we make sense of our lives, the means to both appreciate it and transcend it. “He ran to Kim as he always did: with abandon, bounding over the prairie. This time, though, he ran having caught every nuance in Kim’s voice, understanding him fully . . . [he] loved and knew he was loved in return.” If the dogs can prove that “human intelligence” can be used to create such beauty, or to experience such profound love, it might even be worth having.

This book has a lot of violence, and the pack hierarchy seems much more like Lord of the Flies or, more appropriately, Animal Farm, than any dog park I’ve ever seen. In their world, the dogs struggle to communicate with people, to find joy, comfort, or kindness. Toronto certainly seems less dog-friendly than New York City. But this brutal world would be familiar to Homer, and is the right setting for a wager of his Gods. The dogs are, generally, brave, and make the best of their lot. They are aware; their lives matter. Each represents an opportunity for both hope and meaning that immortal Gods, free of want, can never have. Apollo and Hermes, sitting in their Toronto beerhall, should be jealous of these dogs and their story.

Matthew Feig is a graduate of Tisch School of the Arts and Columbia Law School. He practices law in New York City.