Ongoingness: The End of a Diary – Sarah Manguso 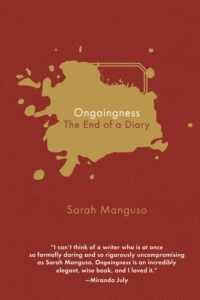 I hadn’t yet read Sarah Manguso when I was drawn to this book by its description “the end of a diary.” How does one end a record that stretches 25 years and 800,000 words long? This is not an impersonal question. I have a kept a diary for almost as long as I’ve known how to write, and for the most part I’ve resisted the fleeting impulse to destroy it. Like Manguso, I wonder about the purpose and the supposed audience for which I write. I use my diary as a rough draft of sorts for poems and other work and to chart the awful vicissitudes of feeling, that if read by anyone else would make me cringe. In fact my mother casually mentioned to me on the phone once, while I was sad after a break up during college, that I’d always had a tendency to get depressed. It was right there in my second grade diary, she said. I was mortified. She didn’t think it was wrong to read it, it’s not like it’s high school diaries, she said, drawing these boundaries. But I see myself as the same person, the same hurt feelings and desires.

Manguso took the practice of writing in a diary more seriously than I, or most adolescent scribblers, did. It’s a matter of degree. I know the feeling of guilt for not having written in days, letting experience go wastefully unrecorded. In Manguso’s experience this is heightened; she felt compelled to record an exhaustive account of every single day that she lived. Her devotion to her own memory was almost religious, for many years, until she became a mother. Then everything shifted, a gestalt change.

Because Manguso chooses not to excerpt her diary, Ongoingness feels withholding in some ways. The essay is concerned with one’s perceptions of experience, and how to render them, yet it is without very much description of the experiences themselves. It’s like Proust without the madeleines and lime blossom tea, without the hawthorns, without the color of Gilberte’s eyes. Manguso rests in abstractions for now — unlike her two previous memoirs, which are significantly better than Ongoingness. Her first, Two Kinds of Decay, is about the body and its failings, detailing the nearly fatal onset of a rare autoimmune disorder. The Guardians is also tied to the physical world, as an elegy to the author’s closest friend. It is a beautiful surfeit of detail: the perfect Manhattan cocktail, a heat wave in New York, a delicate Italian candy that means tears of love in translation. These memoirs are best taken in together, as if three courses in a row. (While waiting for the arrival of Ongoingness I read both memoirs and her poetry.) It’s clear that each work builds on the other, and so in Ongoingness the author has earned the right to not address the daily and domestic. Still, it’s curious that a book concerning motherhood contains so little of the body.

I can appreciate the challenge Manguso describes in representing her diary in the essay. When she began to cull certain memorable pieces, it didn’t cohere. She would either have to use all (800,000 words) or none of it, she says. I don’t envy the task, but I think Ongoingness would be a stronger essay if she had found that elusive middle ground. Manguso’s previous two memoirs are brilliant in what they choose to reveal and withhold. She is the master of understatement. What I like best is when this restraint doesn’t communicate wryness or wit, but when her elegant sentences convey effort, of all that she can bear to say. In The Guardians, to describe her best friend’s musical gifts she says, grief-stricken:

They were competent hands. The bow and the body of the instrument were obedient to them. Everything else I can say about the way he played music is the regular sort of thing. The music he played was good. The feeling he showed was delight in what was good.

Reading this essay reminded me of Nabokov and I had to pull my battered copy of Speak, Memory from the shelf. Water warped and scribbled in, I was unusually hard on this book which was only read once. One day it was the only paper I had on hand when my friend and I, after a boozy brunch, walked into the storefront of a psychic. I took notes on the about the author page, writing down the color of our respective auras. I pray Nabokov forgives me.

It was Nabokov I thought of at several moments in reading Manguso’s various works, all of which are concerned with mortality. Manguso invokes light often, in The Guardians: an elegy for a friend, and here now in Ongoingness she closes on an image of light, along with a happy em dash to suggest continuation. Just as Nabokov opens his memoir, “The cradle rocks above an abyss, and common sense tells us that our existence is but a brief crack of light between two eternities of darkness.” There was a time when such expressions of mortality made me physically uncomfortable. (As if it’s too terrible to say out loud. At least have the decency to be distraught, as I am.) Yet it’s easy to see the attraction in comparing a human life to light: light is a beautiful, changeable energy that one day goes out.

Manguso is careful to avoid having motherhood overtake the essay. Sometimes her self-consciousness is too acute, “Watching him learn new things is like watching a machine become intelligent, or an animal become a different animal. It’s terrifying and beautiful, and this has all been said before.” Her style is elegant and compelling, and I sometimes wish she would risk boring the reader. I want to know what excites people, and breaks their hearts, even when it’s a mother marveling over her baby. Manguso does not want to be one of those mothers who suggest life is incomplete without children. And perhaps she’s protecting her son’s privacy by not making him the subject of her book.

And yet the baby was the catalyst for this radical change, a reordering of an entire way of thinking about time and being. She developed a slight amnesia — you could call it baby brain — that made her forget not just where she left her keys, but also forget that a friend’s father had died; she didn’t recall sending a letter, though she did. It’s fascinating that for someone who felt such terror about mortality and the degradation of memory, once her memory begins to fail her, slightly, she doesn’t feel a terrible loss. With a baby’s constant needs dictating the turn of the day, Manguso begins to live in the present more fully. She’s not concerned with beginnings and endings any longer, but living in the middle of things. She speaks about inhabiting time in a new way, as she’s become the continuity of the baby’s world. She is time itself for another person.

The best thing about time passing is the privilege of running out of it, of watching the wave of mortality break over me and everyone I know. No more time, no more potential. The privilege of ruling things out. Finishing. Knowing I am finished. And knowing time will go on without me.

Look at me, dancing my little dance for a few moments against the background of eternity.

Even though Ongoingness is not my favorite book of hers, I will read anything Sarah Manguso writes. I am so charmed by her wryness, a veering toward understatement. About the project of completing great cathedrals in Europe, which took generations of stonemasons, and which the architect would never live to see, she says “How agreeable, then, to believe in God.” I love each comma in that sentence, the quick work it does: it’s sincere and dismissive at once. God isn’t her cure, but it is someone’s cure.

Reading this essay gives me hope that I will outgrow my fear of death. You can see how Manguso comes to terms with mortality over the course of her memoirs (the first one published seven years ago). I still get frustrated when I’m told that time is not linear. My perception of time moving in a line is all that matters to me; I was never a good philosophy student. So thank god, or whomever, that poetry and good essays exist.