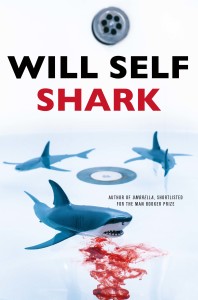 Google Will Self and you’re sure to find a comment that’s funny, acerbic and, to someone, antagonizing: that London’s Crossrail project is phallic, that Orwell is mediocre. Or take, for instance, his profile of Emma Watson, an interview made stranger by imagining the two of them sitting together for a gastropub lunch. Self shared with readers the number of times Watson said “grateful” and “lucky”; Watson, unsurprisingly, said the article was demeaning. Googling Will Self probably happens a lot in the United States: like many English writers, his fame is substantially greater in the UK than in the US. But like some of our own prickly public writers, substantial, too, is his intellect, and the acuity and energy of his writing — all of which are in evidence in Shark, his latest novel.

Upon the release of his previous novel, Umbrella, an ambitious stream-of-consciousness modernist muddle, Self announced that he does not write for his readers. Self’s new novel shares stylistic and thematic kinship with Umbrella, and like its predecessor eschews textual comforts readers expect: line breaks, chapter breaks, paragraphs, dialogue tags. Shark has no time for pause and no space for blankness, churning up clumps of words and polyrhythmic phrases and sounds at a breakneck pace. The book is a single unbroken paragraph. Breaths may be taken between dashes and on frequent ellipses, but readers who depend on the occasional rest will be worn out. This book is a true and unfluffed 466 pages.

The reader is airdropped in and -lifted out mid-sentence. The story in between flows across multiple decades and perspectives. Zack Busner, a holdover from Umbrella and a recurring character in Self’s fiction, is a psychiatrist and co-founder of a progressive therapeutic co-op called Concept House. Busner anchors the story’s present, though the novel veers forward and backward in time and swerves from one consciousness to the next. Here is one such transition:

The lust Genie sees in the women’s faces is a lust for death — they want it, she understands, as much as the men who build, arm and aim missiles…Th-ree…! Twooo…! Wunnn…! They’re gagging for it…their mouths all slack with desire for…Cruise cocks. FREEDOM! The great cry goes up, and right away Genie yanks free of the restraining arms and unties the tapes of his life-vest and the kid — some poor stupid hick like all the rest… — raises his arms automatically so they slide down and out of the armholes…You’re welcome — and would sir like to try another sports coat? The hands are poised for a moment: Claude sees there’s no skin or flesh on them at all, only cooked tendons over white florets of knucklebones…then…it’s the last toll of the dice, my friend…and they’re gone.

One moment the novel occupies the perspective of Jeanie/Genie, an addict taken to prostitution, and the next it takes the vantage of a naval officer recalling wartime horror: his cruiser sinking amid shark-infested waters. The officer is Claude Evenrude, one among the pageant of Concept House’s disturbed residents. A veteran US Army Air Corpsman and survivor of the USS Indianapolis disaster, Claude, known in Concept House as the Creep, is the disturbed enigma the novel sets out to explain. His harrowing experience aboard the Indianapolis is not Shark’s only traumatic event, but it is the novel’s explanatory hinge. After the Indianapolis was destroyed by a Japanese sub, many of the near 900 survivors died from shark attacks. The disaster’s place front and center begins to explain the novel’s title, as well as Claude’s derangement. In addition, it shows the sheer scale of human suffering Self has set and represents the promise that he won’t turn away from the mayhem and horror of war — in fact, in Shark he’s made them his bread and butter.

Claude is just one of several characters whose consciousness serves as a pit stop as the novel motors along. Shark enters other minds as well: that of Jeanie, the former drug addict; of Busner, both in the novel’s present and in a sequence set five years later; and of Michael Lincoln, an RAF pilot and the observer on the mission to bomb Hiroshima. By coincidence Lincoln enters Concept House to check in on a friend’s son and meets the deranged Claude. Their meeting offers both men the opportunity to share and compare their painful experiences of war. Their conversation is Self’s plug for therapeutic dialogue: that through the recognition and empathy Claude and Michael offer one another, they might glimpse a road to psychic restitution.

In interviews Self has said that he intended to write Jaws without the shark. I’m not quite sure what this means, but the book is certainly cinematic: for one, a jumped-forward storyline centers on Busner taking his son to see Jaws upon its 1975 theatrical release. While watching the film he notices that Claude’s backstory as Indianapolis survivor mirrors that of Quint, the salty shark hunter in the film. But more importantly there is something cinematic in the book’s style and self-regard as well; take Busner’s meditation: “Film, he considers, now dominates our experience of the world purely because of the transparency of its own self-conviction.” Self’s use of stream-of-consciousness is a similar effort towards transparency, an attempt to offer unfettered access to the minds of the book’s characters. Moreover, the novel is chock-full of self-conviction: a difficult modernist novel like Shark is certain its difficulty is worth the effort.

It’s true, though, that sharks are missing. When the novel assumes Claude’s perspective to observe the sinking of the Indianapolis and the ensuing shark attacks, it’s a sharkless massacre: “The first hit is so spectacular Claude experiences a kinda awe: a man is lifted clean out of the water and comes water-skiing between the others, a broad wake curling behind him, red, red flounces all over his sambaing body as he wing walks down to Rio.” The man is being eaten by a shark — Claude knows it and so do we. But Self is interested in tracing the shape of trauma, gauging its power and outcomes, not in providing the literal details and telegraphed emotions — this here is pain, this here is loss, this here is suffering — which, inevitably, create a melange of sensationalism. Nor is he particularly interested in the genesis of trauma. Self’s omission of sharks, or in Michael’s case, his omission of the bombing of Hiroshima, suggests that identifying the source of trauma is not enough to heal. Damage done is done, and rebuilding is a process far longer than sniffing out a cause of untimely destruction. Take Claude and Michael, fully aware of what haunts them, yet still shadowboxing the same old demons. Self seems more interested in the inevitability of suffering. Like sharks, humans are just animals, hardwired to cause and endure pain again and again. Claude understands the cycle better than anyone. His raving coalesces into a surprisingly clear, god-fearing analysis of the Indianapolis as part of a gruesome quid-pro-quo: because the carrier delivered the uranium component for the bomb dropped on Hiroshima, the crew were destroyed with just ferocity. In pairing the experiences Michael and Claude have endured, Self is not equating the two survivors, but rather showing the undiminished sway of trauma; it still stands, still haunts. It’s not all bad, though; after all, the two men survived — improbably, to be sure, and their survival carries a seed of hope. Claude goes on raging in his derangement, but like Busner we come to believe a remedy might exist. Death is permanent, but madness and pain, though persistent and lingering, can ease. We might find, if not a cure, then a salve — an abatement to a horror that once seemed inescapable.

Shark is by turns admirable and frustrating. It is a messy novel which uses its subject matter to justify its sprawl: war, addiction, suffering, and death are not tidy topics, so no tidy novel would do them justice. But such a conceit undervalues the artistry of structure, which applied properly can amplify thematic preoccupations. Plot-wise, Shark is not without faults: Jeanie, though vivid and fleshed out, crosses paths with other characters in a way that feels manufactured. Her story seems tacked on, perhaps because it is the most shark-free and because she is not a WWII vet. Having kicked addiction and come to terms with her brutal upbringing and adolescence, she strikes the note of hope the loudest. Inevitably, we compare the trauma of her addiction with the trauma of war, and I struggled to find a meaning in this comparison that didn’t crumble into a platitude about the human threshold for pain, or something like that. But the message is clear: a better future exists. By a more generous criterion, Self’s enterprise succeeds: here is a hunk of modernism that poignantly, beautifully, and, it seems, genuinely renders mental states of sanity and insanity while smudging the gradations in between. It is Joycean, but not just because of the time it spends between the temples, or because its prose is laden with onomatopoeia and neologism. Shark asks the reader to do some heavy lifting. Joyce expected some effort on the part of his reader as well — some minuscule fraction of his own writerly effort. Small in the grand scheme, but not insignificant, and Shark requires patience and endurance to attain its full range pleasures.