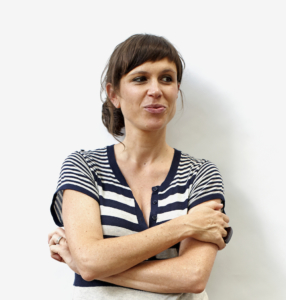 Courtney Maum is a humor columnist, brand strategist, and the author of the novel I Am Having So Much Fun Here Without You.

All of literature does not have a responsibility to respond, but artists do — and as artists, some writers will, and should heed an inner call to rise.

My debut novel is still a baby, it’s only two months old, but I do think I have an audience: middle to upper middle class people who — whether because they travel or are interested in traveling — are able to look at America with an outsider’s point of view. What does it mean to be a serious American writer? I’m not one myself. Yet. I think American authors are incredibly privileged — we have such a large country, the sheer number of people who speak English not just in our own country but in other countries as well automatically puts us in an advantageous position compared to, say, a fiction writer from Peru. I think the audience for American writing has grown and will keep growing in concurrence with the formats and outlets in which new writers can be discovered.

I don’t put a blanket value on criticism, but certainly, some positive reviews are worth more than others. For example, I had a positive review in People Magazine, and it moved a lot of books. I had a negative review in Kirkus, and nobody noticed. I’ve had some very intelligent reviews in prestigious “indie” papers like Brookyn Rail, of which I was very proud because it was a thoughtful critique written by a writer I admire, Elizabeth Eslami. My rule, before I boarded the debut author cruise ship, was that I would only read professional reviews. I don’t read the Amazon reviews, Goodreads, Barnes & Noble, etc., because in my experience, to a large extent, people only take to those sites to vent about something that has more to do with problems in their own life than with your work, and I don’t need to fill my life with that kind of denigration — that’s what Facebook is for! With the Internet, there are more literary critics now than ever — but what we have gained in quantity, we have lost in quality.

Luckily, the writing I do for a living isn’t fiction writing — I work for branding agencies as a namer and brand strategist, naming products and helping clients with their brand positioning. I’m extremely fortunate because I love the side work that I do. I don’t think our current economic system supports academic writers — writers who are teaching to support themselves, or who rely on fellowships and grants to see them through. Our current economic system doesn’t support artists in general, or anyone, actually, who works for themselves. I mean, it took me about seven years to get health insurance and my current plan is becoming obsolete this year.

I grew up in the wealthy bedroom town of Greenwich, Connecticut around people who had all of the opportunities and material pleasures that great wealth can afford, but it was evident to me, even as a child, that the wealthier people were, the more unsatisfied and unfulfilled they tended to be with their lives. George Bernard Shaw said, “As long as I have a want, I have a reason for living. Satisfaction is death.” I think this is true. Obviously, you want to be in a comfortable enough position that your basic health, housing and educational needs are taken care of. But it is important to yearn for something. It is important to have to strive. I think that, to a certain degree, I will probably always write about wealth. Wealth intrigues me, especially as the gap between the haves and the have-nots continues to widen and we continue to ignorantly demolish our planet, due in a great part to the actions (and non actions) of these same haves.

I don’t feel like I’m in a position to answer this question in a knowledgeable way as I don’t think of myself as someone who reads “political” books. That being said, I do see a troublesome amount of assumption taking place in some contemporary work. I’ll read stories in which the author seems to assume that we all feel the same way about a political event, and then builds the story on this assumption without doing the hard work to individualize the different characters’ reactions to the event in question. For example, I think Edan Lepucki is a wonderful writer and a generous person, but I was disappointed by her post-apocalyptic novel, California, because I couldn’t find any clues as to what the “apocalypse” was. The world she described felt five steps away from what we’re already living, but in order to get there, I had to travel on my own assumptions and that gets tricky when politics are involved. Another thorny subject is September 11th. There’s such a national consciousness around this event — 9/11 is branded into us, it’s downright patriotic to be on the same emotional page and to just assume we all think it was abominable and move on. That’s why I’m looking forward to reading Richard Bausch’s Before, During, and After. From the reviews I’ve seen, it appears that Bausch has managed to make September 11th such an important part of his characters’ inner lives that the event becomes a tumor that grows inside of them long after the towers have come down. I like that. That’s hard work.

I should mention that one could criticize my novel, I Am Having So Much Fun Here Without You, as “using” the Iraq War as a gimmick, because it comes up as a reoccurring theme throughout the novel without directly affecting the lives of the main characters in the book. But here is the thing, my main character (a British artist) does use the Iraq War as a gimmick. He jumps on the political art train and incorporates the war into a massive installation he’s putting together for a new show in Paris that happens to coincide with the actual declaration of war. It’s a very successful show, and it’s entirely thanks to timing. My protagonist, Richard Haddon, admits to a certain extent that he’s a hack — he acknowledges that he would never fight in any war himself, he’s not making donations to any cause, he’s not protesting in the street. And still, he uses the current political scene to coast to a certain level of fame. He’s an opportunist, and I wasn’t trying to paint him as anything but that.

Honestly? Honestly? I can’t answer this as a writer, I can only answer this as a human being and a new mother. But I have spent a lot of time recently preoccupied with the feeling that the end is somewhat near. That we’ve done too much damage to the planet, that we’ve passed the point of no return, that there is too much hatred out there, too much fear, too much anger. So it might be selfish of me, but I personally am focused on enjoying every second of my life right now, and on being the best mother, writer, friend, wife and human being that I can be, because I don’t know how much longer this beautiful life will last.