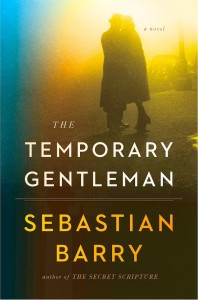 Against what the balladeers would tell us, nationalism has never been an all-in sentiment among the Irish. In the five or so years that preceded the Irish War for Independence (1919–1921), for example, some 200,000 Irishmen fought on Britain’s behalf in the First World War. Then, in the years of the rebellion itself, no fewer than 325,000 Irish acquitted themselves loyalists. Again, some twenty years later, when World War II rolled around, more than 200,000 Irish went to England either to fight in its military or to seek employment in an economy hungry for workforce replacements.

In his several prior novels and plays, Sebastian Barry has made this important subset of the Irish population (West Brits and Castle Catholics, as they are sometimes derogatorily called) his signature subject. We recall, for example, the title character of his 1998 novel The Whereabouts of Eneas McNulty. A Royal Irish Constabulary trooper in the Independence War’s waning days, Eneas lights out just after Independence for a lifetime of rootless Anglo-Imperial wandering lest a recriminatory Republican bullet one day surprise him in his Sligo home-place. We recall, too, Thomas Dunne, the Dublin Metropolitan Police Department Superintendent who was the central character of Barry’s 1995 play The Steward of Christendom. A Catholic, it was Dunne who had ordered in 1913 the baton charge that killed four demonstrating trade unionists. Looking back some twenty years later on this and other vexed moments in his public life, the now institutionalized Dunne cannot “shake off the feeling of being knackered, knackered somewhere deep in himself — something gone wrong, in the very center.” “Were [we] heroes or eejits or what?” he asks himself.

The title character of The Temporary Gentleman is also a “compromised” Irishman, and he too feels knackered (exhausted) in his troubled life’s last phase. However, he has no doubts about his own moral worth. Looking back on four decades of intermittent service to the Crown — twice a British Foreign Service official, twice a British soldier — and looking back too on his simultaneously chaotic marriage, Jack McNulty, brother of Eneas, plain and simply adjudicates himself “a bad man.” Importantly, he’s thinking more of his failings as a husband and a father than as a son of Eire.

Jack’s judgment is manifestly accurate, though not unassailable. In the novel’s present 1957 moment, he is dallying in Accra, Ghana, “staying on” there after his employers, the British and the UN, have departed. He will soon go back to Ireland, for he “has duties there, not least to [his] children,” but in the meantime he is “content enough” to hang around a newly freed country not so unlike the just-liberated Ireland he came to manhood in some forty years before. Also, before he goes, he has a heart that he must mend, a heart that “is broken,” that “just gets worse and worse, like an engine with a neglected fault that weakens all the other parts.” And writing will be his tonic. He will “go back over everything and find the places where it broke and ask the god of good things to mend [him], if that is possible.” He will write it all down “honestly.” It is not an un-admirable prescription.

Chiefly what he wants to remember is how the best thing that ever happened to him — his marriage to Mai Kirwan — went so disastrously awry. The pair met in Galway in the Civil War year of 1922. Both were university students, Jack the Catholic son of a Sligo lunatic asylum warden, Mai the Protestant daughter of a Galway insurance broker. Class and religion were, then, problems for the couple, and also politics, though, all things considered, none would prove insurmountable. Should he be roused to do so, Mai’s father could “count himself among the famous Tribes of Galway.” However, as Jack astutely notices, the business Mr. Kirwan did was not so flourishing that his wife could ignore the opportunity to take in lodgers in the summer months (which she did “discreetly,” that is to say, “with no sign to say so outside the house”).

Politically, the Kirwan household was divided and assailable in its breach. Mai “was passionately interested in and supported the new government [the Irish Free State], and was constitutionally able to do nothing except worship at the altar of Michael Collins.” It was her fervid opinion that “this old country needs a new lick of paint.” Her father, on the other hand, “wasn’t comfortable with countries won by force [a.k.a., the Irish Free State],” nor did he see much save civilization’s squandering coming out of the Civil War. Into this Kirwan family division, Jack might have safely slid in sidewise had he stuck by the policy of silence in political matters that he had developed as a result of watching “the troubles [his] brother Eneas had endured.” However, under the influence of drink and imagining a future for himself and Mai in Africa, in the very first of his formal sit-downs with the girl’s parents, Jack observed out loud that he was “just grateful that we are still connected somewhat to the crown.” Though he wouldn’t censure it, this was an opinion that “troubled” Mr. Kirwan for a mix of patriotic and prudential reasons that, suggests Barry’s subtle text, the actuarially inclined paterfamilias himself would be hard put to sort out.

In any event, neither this ill-advised comment nor another by Jack about the people of Sligo being no less provident than those of Galway — a comment also brought to the surface by the “four whiskies” he had imbibed — caused Mai’s father to banish his daughter’s suitor from his house. The expulsion would only happen some weeks later, when Mr. Kirwan, having gone into Sligo to vend insurance to the improvident folk there rooted, chanced upon his potential son-in-law, fallen down, full drunk, on the pavement, and “heeled up like a cart against the wall of a bank building.” Immediately, whatever had been dad’s forbearance in Jack’s regard was displaced by a foreboding so apoplectic that it caused Mai to laugh as she described it to her now outlawed lover.

Still, not long after, the two would marry, for, as Jack explains in a transitional sentence as dark, swift, comic, and callous as any written by Flann O’Brien — a sentence in its heartlessness a-typical of Jack — Mai’s “father was old for a father and in the way of things he died.”

We are now through Jack’s memoir’s preliminaries, and largely prepared for the marriage to follow. I say “largely prepared” because, up to this moment, the memoir has been less forthcoming about Mai’s liabilities than it has about the memoirist’s own (namely, his alcoholism, his political agnosticism, and his propensity for flight to the colonies). If we have sensed defect in Mai, it has only been in her heedlessness of her father’s advice and, of course, in her choice of paramour. Also, it augurs ill that hook, line, and sinker, she has bought into the promise of Ireland’s just-achieved independence. To be sure, she, no less than Jack, has weaknesses. Hers include psychological instability, alcoholism, and an intemperate, violent disposition. These weaknesses begin to manifest themselves early in the marriage, indeed, on the wedding day itself.

That ceremony just ended, Jack gets a sampler of his bride’s perennial distress when Mai dashes pell-mell into the rain-soaked streets, heading for her now shuttered family home, shedding her veil and wedding ring along the way. Then, in the years ahead, he experiences the whole large valise of her weaknesses, among them, her penchants for despair and fatalism, for drinking, pill-taking, passivity and aggression. To be sure, these debilities are worsened by Jack’s own shameless behaviors, among them, his losing their first real home, a house that Mai had inherited, to gambling debts. Ditto his drinking and his many years of absence while in the employ of the British Foreign Service and British military. These, too, air the fires of Mai’s self-destruction. In short, the two are the most ill-conceived match that ever desire and circumstance brought together, save, as Jack dubiously concludes, that they loved and remained loyal to one another through to their maddeningly dysfunctional association’s sad end, Mai’s relatively premature death and Jack’s equivalently early widower-ing.

Barry’s novel, then, would tell us that live-and-let-live politics, transnationalism, expatriate-ism, escape-ism and dereliction of familial responsibilities often join hands and sadly posy in this inveterately postcolonial/neocolonial planet of ours. This is the moral of Jack’s story. Also, says the novel, those who can least afford to do so will hook up with the absent in numbers greater than chance would explain. This is the unfortunate truth at the bottom of Mai’s story. These principles are universal, but they apply especially in Ireland, says this very Irish novel. They are points well taken. The book’s second virtue is its throwback, theatrical eloquence. A playwright as well as a novelist, Barry is clearly more a disciple of Shakespeare and Boucicault than of Beckett. His memoirist-narrator Jack indulges as freely in pathos and metaphor as he does in drink. Further, notwithstanding our contemporary prose culture’s ethics of restraint, this is all to the good in The Temporary Gentleman, for the book’s most felt passages are in many cases its most soliloquized.

Unfortunately, American readers are little likely to catch the novel’s selection of references to Ireland’s political leaders in times past, among them, to Grattan, Redmond, de Valera, and the already mentioned Collins. They are names worth a trip to Wikipedia, where, among other interesting information, one will learn that what this particular stalwart four had in common was this: that when it came time to stop shouting whatever it was they each had for years been shouting, they stopped and shouted the opposite. In other words, their politics were — like Jack’s (and Mai’s and her father’s) — not above situational considerations. Barry’s already strong novel is made better by this and other ironic bits of Irish historical awareness.